Wake up an hour early to live an hour more 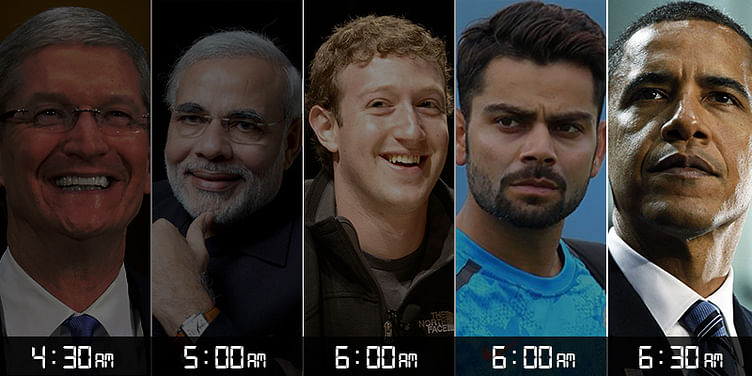 Mornings hold the key to taking control of our schedules.

If we use mornings wisely, we can build habits that will allow us to lead happier, more productive lives.

While many of us are still in bed, some folks are scoring daily victories to improve their health, careers, and personal lives without sacrificing their sanity.

Every successful man in this world understands the importance of time. This is the only reason they get up early. Once they are up early, they have a few extra hours to contemplate before the day begins.

Drawing on real-life anecdotes and scientific research that shows why the early hours of the day are so important, Laura Vanderkam reveals how successful people use mornings to help them accomplish things that are often impossible to take care of later in the day.

What the Most Successful People Do before Breakfast is a fun and practical guide that will inspire you to rethink your morning routine and jump-start your life before the day has even begun. Laura poled 20 executives, in which 90% said that “getting up before 6 am is good.” They even told what their priorities are after they get up.

Let’s look at how they start their morning and what most of the successful people of the world do first after they get up.

I always tell myself that we are born here not to work, but to enjoy life. We are here to make things better for one another, and not to work. If you are spending your whole life working, you will certainly regret it.

This sentiment lies at the heart of Jack Ma’s lifestyle. That is why; he gets up early around 6 to 7 am and utilizes every single second by enjoying it. He does work for half an hour and then spends time with family.

His deep focus on customer service has become legendary, but if you think Jeff Bezos is a workaholic, think again. The CEO places a high priority on a good night's sleep, even when deadlines loom and pressure is high. So he has no definite time but generally wakes up early and sleeps early.

Tim Cook is known for sending out company emails at 4.30 in the morning, according to Gawker's Ryan Tate. By 5 am, he can be found in the gym. And he works late too, priding himself on being the first in the office and the last out.

Bill Gates takes out atleast one hour for exercise. During which he works on treadmill and cardio. For this, he follows the instruction video of teaching company.

You may also like: This is the most useful thing Bill Gates ever learned

Mark Zuckerberg usually makes his first move at 6:00 am in the morning, gets ready, and goes straight to the office. According to www.sleepypeople.com website, earlier Mark was known for starting his day with very little sleep as his chatting with programmers used to go on till 6:00 am sometimes.

Jack Dorsey put’s his shoulder to the wheel at 5.30 am. He meditates and then jogs for five miles.

Richard Branson swims on his island early in the morning. After that, he goes to play tennis and then has a healthy breakfast.

Warren Buffett gets up in the morning by 6.45 am and reads six newspapers. But otherwise, he does not have any fixed schedule. He spends 80% of his time reading.

Routinely, Ratan Tata attends the meetings of various companies of TATA Sons starting from 6 am, and in the weekends he either drives his cars or his own Falcon private jet early in the morning.

Mukesh Ambani wakes up between 5 and 5.30 am every morning. He works out in the gym located on the second floor of Antilia. This also includes swimming followed by reading a couple of news papers.

Oprah’s day starts with a 20-minute meditation session for keeping her mind at peace. Thereafter, she exercises in her gym.

Waking up with (or before) the sun, allows executives like General Motors’ Mary Barra and Pepsi's Indra Nooyi to get a head start, knocking out tasks before the rest of the world has rolled out of bed.

Though she doesn't run straight to the office after waking up at 4.30 am, Warrior spends an hour on email, reads the news, and works out. And she is still in the office by 8.30 am at the latest, according to Yahoo Finance.

According to the website www.narendramodi.in, PM Narendra Modi’s morning starts at 5:00 am. He performs pranayama, sun salutation, and yoga.

Barack Obama President of the USA

US President Barack Obama gets up around 6:30 am and does weight training and cardio in the gym. Later, he has breakfast with his family.

PM David Cameron starts his morning at 6 am. Until 8 am, he completes his important work of government business and consecutively has breakfast with his family. During this time, no one is allowed to switch on the television.

He gets up early in the morning at 6.00 am. His workout pattern includes a wide combination of weights as well as cardio exercises. This combination has helped him develop muscles in a most appropriate way to suit his batting(hitting).

He starts his day with a workout, which is usually a bike ride with his wife, but still gets to the office by 6 am, according to Portfolio.com.

Immelt gets up at 5:30 in the morning every day for a cardio workout, during which he reads the papers and watches CNBC, he told Fortune magazine. He claims to have worked 100 hour weeks for 24 straight years.

Dan Akerson told the AP he will "rarely sleep past 4.30 or 5 am," waking up so he can talk to GM Asia before it gets too late. He calls it the best job he's ever had,

It's complex and interesting and exciting.

Bob Iger told The New York Times that he gets up at 4.30 every morning. He takes the quiet time to do a number of things, claiming to read the papers, exercise, listen to music, look at email, and watch TV all at once. Even though it's a quiet time, he's "already multitasking."