This Chandigarh-native is developing app-based English-learning modules for over 1,000 visually challenged people 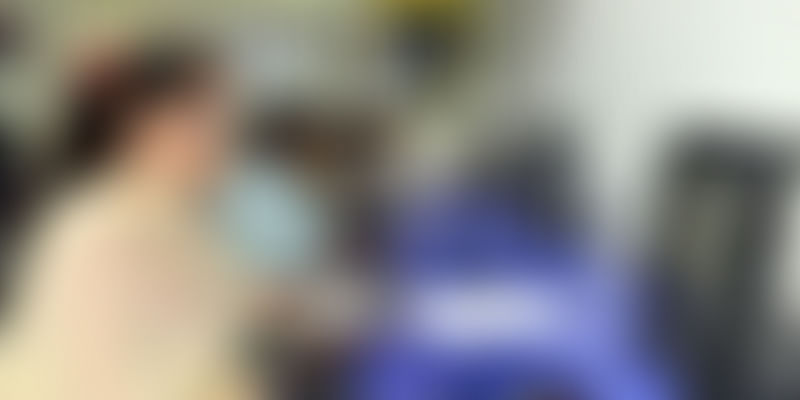 It was the summer of 2006 and 17-year-old Abhishek Syal was convinced that it would be criminal not to be proactive and productive in the three-month-long break before starting his undergraduate programme. He decided to explore the building down the street from his house. He had visited it frequently with his parents with donations, but this was the first time he would enter without an agenda, and leave having become one with them. That building was the Institute for the Blind at Sector 26, Chandigarh.

Abhishek observed how a fifth-grade science teacher was teaching students a water-cycle diagram, one by one, by guiding their fingers, while describing the picture. Since then, his whole life, academically and professionally, became about finding an answer to one question – how visually challenged children can learn from maps and diagrams on their own. His summer internship led to a four-year research stint, during his engineering undergraduate programme, culminating in a patent-pending ‘maps and diagram reader.’

But while doing field research, he realised that he was, in the process, helping the visually challenged to self-learn – and this led him to found ARISE Impact. He also realised during his field experiments with the students that they were not self-confident and independent. “This was because for most of their learning process, they depended on their teachers and parents to explain the concepts to them and there were not enough resources tailor-made to their cognitive learning process for self-discovery and understanding.”

With his idea of self-learning for the visually challenged children, Abhishek launched ARISE Impact in 2010 dedicated to creating self-learning resources for the differently-abled. He recruited his high-school friends and juniors in January 2010 to lay the groundwork. The result was, by the end of June, they were able to deliver short and effective bilingual modules for learning the English language, suitable for the visually impaired in the third to fifth grade.

These audios incorporate a special methodology, where they have mapped each concept to a set of ‘real-life’ experiences of a visually challenged child – that is the set of audio and tactile ‘lenses’ through which they experience the world. The SEMs cover coursework, short stories, selected audio encyclopedia, and an audio dictionary. All such resources are in a bilingual format, line by line. Impact studies in pilot tests have demonstrated an increase in the engagement levels for audio-based SEMs to 95-98 percent, covering the entire spectrum of blindness, against traditional audio resources, which are around 30-40 percent.

The Institute for the Blind, Chandigarh, became their strategic partner for the pilot, and augmented their digital library with ARISE’s self-learning SEMs. J.S. Jayara, the dean at the institution, says “The audio lectures were developed after repeated research, surveys, and experimentation at our institute, and were even improved upon based on the feedback from our teachers. These lectures will go a long way to enable the visually challenged to be better suited for working environments, and make them capable for involvement in document processing and internet-enabled software application usage.”

– they also rely heavily on open source software and technology for their solution, and prize money such as the sum they received at the eNGO Challenge in 2011. They also have a group of ‘angels’ who help them sustain their yearly expenditures.

After college, Abhishek took on two full-time jobs – one was a corporate gig at BHEL to put food on the table, which he has still kept, and the other, social entrepreneurship to feed the soul. At BHEL, he was in corporate R&D to experience first-hand innovation and garner invaluable experience – like working on two patent-pending innovations in hydro-electricity generation. Come dusk, his real passion would ARISE.

In the long run, their approach is to pivot more toward self-learning online services that lead to employability, by deploying their methodology on computer skill-set training courses. “Creating such a service would be useful to differently-abled students, teachers and trainers, schools as well as employers. We create value for employers by giving them a source of differently-abled skilled talent – and monetise it in a similar vein to the Udacity platform.”

Till date, ARISE Impact has impacted over 1,000 visually challenged children with over 300 SEMs ranging from the third – twelfth grade. They also handle more than 600 volunteer applications per year, and have over 25 expert volunteers spread across six time zones.

“One of the students that inspire me is Gurpreet. In 2009, she was very shy, talking to me in monosyllables. Using SEMs helped her to get over her shyness when someone spoke to her in English. In fact, she confidently requested and explained to us the need for a simple audio dictionary, something we didn’t think about.”

The beachhead market size for placements and training of the visually challenged is currently estimated at Rs 0.6 billion. They want to shift from their current on-the-ground operations to a completely online model of establishing partnerships and making the service available digitally. Their service would enable the teachers to train on best practices, create, share and download the self-learning content for computer based and language fluency skillsets.

Abhishek has been recognised as an MIT TR 35 Under 35 India Innovator; and ARISE Impact won the eNGO Challenge among 700 NGOs across South Asia in 2014 in the Mobile Usage category. It was handpicked as one of the top edutech social innovations to be honoured at the Classy Edtech Panel at the 2016 Collaborative Conference in Boston, US, presented by the UN Foundation, Stanford Social Innovation Review, and the Classy Awards.