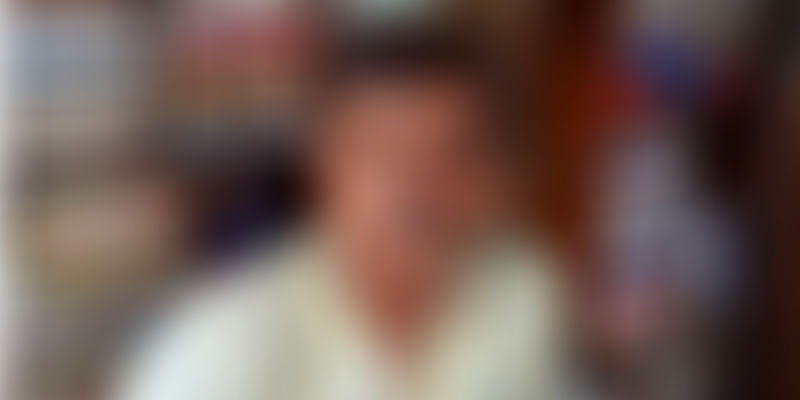 Born and brought up in the ghost town of Mumbai’s mills, Parel, Ajay Tiwari led a childhood rife with conflict. A break was hard to come by; whether it was the struggle to escape hooliganism that most of his peers were edging closer to because of economic pressure, or restraining from celebrating the joys of youth, such as birthdays and cinema because of not having enough money to get by. But luckily for Ajay, he was always after a different kind of wealth – that of books, knowledge and literature. And he was on a mission to spread his riches to the world.

Ajay’s father died when he was in school, leaving three boys and two girls in the care of his mother. Ajay was the youngest of all his siblings. Parel went through a crisis when its mills shut down, and the area became notorious for its gangs.“My financial situation was not good, so I had to do a part-time job to pay for the school fees and study material.”

He was barely 14 years old and freshly out of the ninth grade when he took up his first job at a garments factory. Although he excelled in his 10th grade examinations and passed with distinction, the family’s economic condition placed him at the fork in the road – leaving him to make a tricky choice between ensuring financial security of his family by continuing with his job or going for higher education. He chose the latter, and studied up to the third year of B.Com. “I was an average student. I never told my birthday to my friends because I did not have enough money to celebrate. And instead of watching movies in the theatre, I used to watch them on the road during Ganpati, or on Sunday evenings.”

Not that it bothered him that he could not blow up all his money on films, as he was much more fond of the literary universe rather than the cinematic one. “I used to read lots of magazines and books. My favourite magazines were CSR and Reader’s Digest. All my friends would spend money on movies, but I would spend all of mine on books. Sometimes though, I did not have enough to buy books or magazines. At that time, an idea clicked. I thought why not collect money from people like me who are interested in reading but cannot purchase due to the high cost.”

What he lacked in capital, he made up with his passion and resourcefulness. He started a home delivery library in his locality in Mumbai. “I could not afford a shop, so home deliveries were a better model. My library had mostly Marathi but also quite a few English books. Initially, I started collecting deposits from my customers to purchase the books, but I was not getting a great response since I lived in Parel, and my locality was largely composed of the illiterate and poor.”

Another storm coming his way was his family members and friends being upset with his irrational career choices. “They thought that I was doing a very small job, and wasting my education. It was hard to convince them that my plan was to take my library over India, and create lots of employment. But I needed lots of money to purchase the books, so I decided to take up a job as well.”

Trip to Mars, with his feet still on the ground

He took up a job at Mars, the company that makes cakes and pastries, as a catering steward. Within eight months, Ajay got promoted thrice because of his triumphs for the brand such as landing a one-year catering contract with Air India at Mumbai’s International Airport – where he was appointed the Air India Lounge Manager. He was doted on by all and sundry at this gig – film stars, cricketers, and politicians alike.

After the year-long contract ended, the lounge was given over to Taj Caterers. But by then, his library had gained ground and perked up, so he chose that moment to detach his figurative safety gear, that is, quit his job and shift focus completely to his library.

Back to where he belongs

He stopped taking deposits from his customers, and faced even more challenges than an average cash-strapped entrepreneur to make both their ends meet. “It got difficult to manage - ours might be the only library that does not charge deposits. Plus, there were two or three instances where my staff left me and started on their own - but after a year or so, they would come back as they found it very difficult to run the business. Times change, and home delivery is a challenging job, because even after giving handsome salaries and perks to the delivery boys, they keep switching jobs.”

He switched to the practice of charging a monthly subscription of Rs 100 and patiently did his waiting, until the income went up and so did his quality of life, and he was finally able to purchase a motorcycle and eventually, a four-wheeler.

And his dear books were what led him to his second moment of clarity. “I had read in a book that two incomes were always better than one. My expenses were very high due to the salaries I had to pay, the purchasing of books, and paying off my car loan.”

As he had built a strong community of loyal clients of his library – almost 500 signed-up, regular subscribers amongst whom were also noted celebrities from Marathi serials and films – the word got out and they started giving him orders for renting his car, until it mushroomed into quite a thriving occupation. Through references of his well-wishing subscribers, he drives his taxi for a few hours every single day, but still tries to spend most part of his day at Rashi.

“I drove Surya for his upcoming film 24, and Shashank Udapurkar, actor and director of upcoming film on Anna Hazare. My car travels all over Maharashtra and Gujarat, and I am earning well enough from both my businesses, but I spend my income from the car to purchase books to expand my library business. My long-term plan is to open my library branches all over India, especially in smaller towns so that the people there don’t have to spend money on books. Above all, I think my business may increase a lot of employment in the industry.”