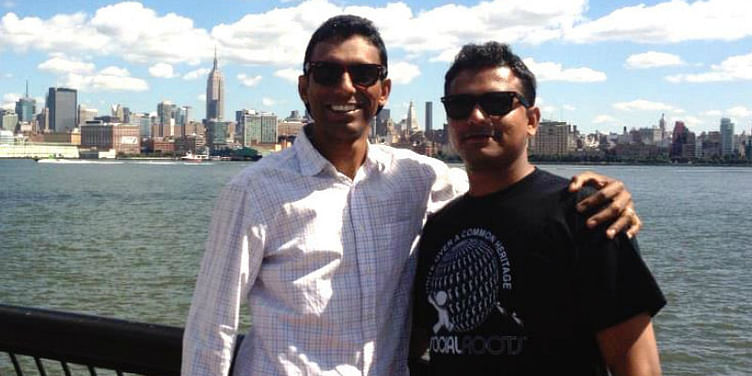 On the trip to New York, Amit Rao was gifted a pair of Oliver Peoples sunglasses by his elder brother Nagarajan Rao. But when he got back to Mumbai, he misplaced the $450 worth sunglasses while going for a meeting. Although the design of the frame was simple and classic, he failed to find the exact frame in India.

While researching, I came across sites like Lenskart that sell low quality cheap priced frame. And some international brands listed on their site had outdated designs and had a higher price tag compared to the same ones I had seen in the US and UK,” says 34-year-old Amit, an alumnus of Bradford University with stints in the US and UK.

He also noticed that majority of the well-known brands are made by Luxottica Group, an Italian eyewear that has a market share of over 80 percent of the world’s major eyewear brands. It also makes sunglasses and prescription frames for a multitude of designer brands such as Chanel, Prada, Giorgio Armani, Burberry, Versace, Dolce and Gabbana, and more.

Disappointed over the dearth of high quality frame in India, Amit hit upon the idea of Four Eyes Club in January 2015. Nagarajan also joined the venture aligning to the vision of producing high quality frames with international market price. An alumnus of New York University, Nagarajan runs his own finance firm in New York.

Amit recalls that when they launched Four Eyes Club in Mumbai in 2015, they were the only online eyewear company in India selling self-designed and manufactured frames.

The company is currently bootstrapped with a capital of Rs 70 lakh invested by Amit and Nagarajan . The biggest challenge for them was to sustain the conversion rate of customers. Amit mentioned that despite the phenomenal response from the customers, the return rate was 0.03 percent. Logistics has also been one hurdle in terms of tapping few markets in India.

The frames of Four Eyes Club are designed in Brooklyn, with the help of inputs (in design colour and shape) from New York-based freelance ophthalmologists. Four Eyes Club currently has 25 frames for sale.

“We worked with some very talented eyewear manufacturers in Asia who manufactured our prototypes. All our frames are made from the highest quality recycled acetate. We have secured our own import/export license in India to directly ship our goods from the manufacturer to our warehouses in Mumbai,” says Amit.

A tiny bit of social contribution

Apart from the design and manufacturing of the frames, Four Eyes Club contributes a small amount of the sale to Wildlife SOS, an animal rescue and support centre in India. Moreover, the handmade pouches for the eye frames have been made by a Safa India, a Women’s Cooperative in Hyderabad, where the women workers are the victims of domestic violence. Instead of donating money, the startup intends to empower the women by giving them the opportunity to earn money.

The frames of Four Eyes Club are marketed up by 30-40 percent from the cost of manufacturing and importing. The startup designs 23 pieces per month. The month-on-month sales growth has been steady at a rate of 15 percent. They predominantly market their products through social media platforms like Facebook and Google+.

We have created few marketing campaigns reaching over 500 customers in a single day. We currently sell hundreds of frames all over India. Our sales have grown month over month, but we are tight on marketing. So these numbers are slow to grow and we don't have enough capital to pump into the business,” says Amit.

Four Eyes Club has a team of six members including Amit and Nagarajan. The company wants to expand to the US, Canada, UK, and EU in the next 12 to 18 months.

GKB Opticals is a large Indian retailer of optical products (sunglasses, eyeglasses, contact lenses and accessories), and operates multiple retail stores in India. Headquartered in Kolkata, the company has over 60 stores across India.

Last year Bengaluru-based Ben Franklin Opticians raised Rs 40 crore. In the online space, Lenskart is the major company that started in 2010 under the umbrella of Valyoo along with Jewelskart, Bagskart and Watchkart.

Last January, the company had raised Rs 135 crore and decided to focus only on Lenskart, and shut all other portals. Recently, the company raised Rs 400 crore from Ratan Tata and IFC. There are new ventures that are exploring the space now. Players like Glassic and Gorgeye have entered the online space.

The eyewear industry has been in the hands of a few for decades and that is finally changing now. Like other sectors are shaken up by technology, the eyewear industry too is seeing a new wave of efforts to take on the traditional giants in the business.