How important innovation is in the modern world 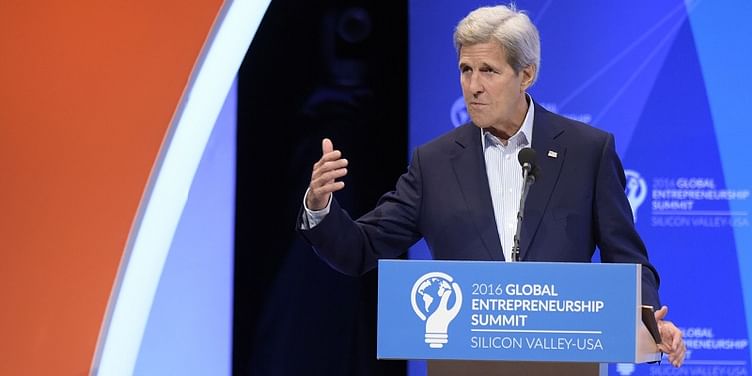 Into its 7th edition, the Global Entrepreneurship Summit (GES) 2016 was held between June 22-24 at the epicentre of technological innovations - Silicon Valley. The summit, which turned out to be a huge success,witnessed participation from world’s best innovators, thinkers, social entrepreneurs and investors under a single roof.

At the event, filled with satires and humour, the speech by John Kerry, the US Secretary of State, focussed on the challenges faced by entrepreneurs and how important innovation is in the modern world. The following are some excerpts from his talk.

About GES and its success

I also know that this peninsula is famous for its 20-something CEOs who wear jeans and hoodies to the office and make a living trying to upend the established order. So clearly, it is only fitting that your opening act should be a guy with gray hair in a dark suit - who’s spent decades in government and whose idea of disruptive art probably pretty much begins and ends with Mick Jagger.

he started his speech.

According to John, the government’s influence on these events gets as far as convening the forum and making sure that the coffee is hot! However, the success of such events is measured by the of quality of interventions by spectators, the quality of relationships built, and the partnerships formed between peers and investors.

The boom of entrepreneurship and its challenges

Becoming an entrepreneur is a dream for many, remarked John. However, it all begins as a dream. But it becomes a reality, if a person is ready to see beyond the challenges. He also emphasised that there is a very close relation between what entrepreneurs and investors do, and what the US government does as part of their foreign initiatives and efforts. Further, he stressed on the need to encourage entrepreneurial activity in order to tackle the ever-increasing and ever-complicating problems.

Citing differences between the era that he grew up in, around the time of World War II, John spoke about how innovations introduced by entrepreneurs has made events across the globe more discernible and brought the world closer. People now have the awareness of different parts of the world, and how the people/governments there are performing. This also implies that the disturbing images and lies can reach every part of the world in an instant.

The three main problems faced by the current generation

John highlights the three main challenges that the current generation faces. The first is the rise of extreme violence and terrorism in this millennium. Every part of the world is under a constant threat and everyone needs to put their heads together to eradicate radical groups, urges John. Besides, the focus should also be to provide abundant education and job opportunities to the young so they are not easily lured by extremists and demagogues.

The second problem threatening our survival is the climatic changes and other environmental dangers. The gravity of this problem demands that both public and the private sector should come together and help society make the move towards a low-emission economy.

The third challenge, John talks about, is closely tied to the first two. It’s to improve the overall governance by bringing the leaders across the world - who are fighting terrorism, corruption and other generational issues - closer to each other. The entrepreneurs and business people confront and understand the severity of such issues; wherein poor governance in a particular region can severely impact the business environment prevalent there.

Even though most of these problems seem to be of global scale and the responsibility of the respective governments, John also encourages the private sector to come forward and render their support for the same.

And you may not realise it, but you also provide a highly visible and very effective rebuttal to the propaganda of violent extremist groups. Because your optimism provides an alternative to their nihilism. Because you’re trying to build the brighter future that in fact these folks are determined to prevent.

adds John while addressing the gathering of entrepreneurs.

How a healthy entrepreneurial ecosystem is vital

In order to foster a healthy entrepreneurial culture, the public sector shouldn’t act as a barrier for new businesses, but as a facilitator. Some of the ways in which a strong, connected ecosystem can be nurtured is by expanding access to capital, encouraging innovation and risk-taking, promoting transparency, ensuring that the rule of law is followed and creating an infrastructure of both good governance and open markets, advises John.

Understanding this, the US State Department works closely with entrepreneurs, both inland and international, to find better solutions to the existing problems. They have established centres in Pakistan, Cambodia, Zambia and Kenya to provide training, mentorship, and access to technology to women entrepreneurs.

The world has now been brought even more closer, thanks to the rise in number of entrepreneurs, informs John Kerry. There is also a shift in desire, aspiration and felt needs of the world population. Inspired from his college professor, John Kerry quoted that

All politics is a reaction to felt need.

The needs are becoming more and more tangible now, says John. Giving a shout out to the budding entrepreneurs, John asks them to utilise their business skills, ambition, and the desire to get rid of problems and improve the quality of life on all grounds. One way to start working towards the greater good of mankind is to shift to a low-carbon, low-emissions economy.

We, mankind, are currently making huge strides of development. Extreme poverty worldwide has fallen beneath 10 percent for the first time in history. We are also on the verge of becoming the first generation in 30 years to be born AIDS-free. A huge part of the credit goes to entrepreneurs, who’ve helped governments worldwide to take giant leaps forward.

However, 700 million people are still struggling for food every day across the globe. In case of AIDS, the transmission rates still haven’t come down and we have to improve upon accessibility of proper treatment.

Today is what has been a culmination of the efforts put in and the ideas brainstormed upon by you and the past generation of entrepreneurs. We have improved on almost all fronts, ranging from healthcare to poverty.

All of this isn’t because of any one country or because of what governments do alone. It’s what happens when people have faith in their own values, in their own skills; when they respect the rights and the dignity of each other; and when they believe in the possibility of progress no matter how many setbacks stand in the way.