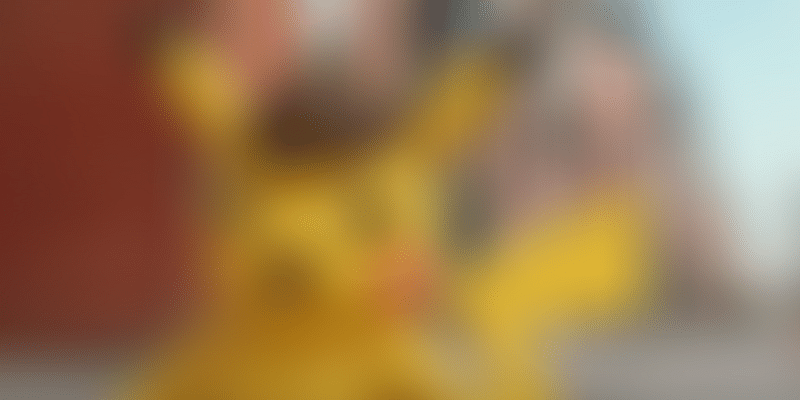 Legendary Entertainment has won the rights to produce the first live-action Pokemon movie, with the first film in the franchise to be based on the character "Detective Pikachu."

The deal, reported by Variety, will see Legendary partner with the Pokémon Company and comes two weeks after the launch of the Pokemon Go app game which has become a worldwide hit.

While few details on the film have been released to date, Legendary has confirmed that the script will be based on "Detective Pikachu" -- a new character in the Pokemon universe, introduced through a video game in Japan -- with production to be fast-tracked to start in 2017.

Meanwhile, according to a report in The Independent, Syrian children held Pokemon pictures in the hope that people will find them and save them. The report said, "The images, published on Facebook, show young Syrians looking dejectedly into the camera holding images of Pokemon characters with the words: "I am here, come save me." The signs also state the location of each child. They are all in different Syrian towns. One of the children's sign reads: “I am in Kafr Nabl on the outskirts of Idlib, come and save me," and another: "I am in Kafr Zeta, save me."

Japan isn't taking any chances when it comes to the safety of impatient fans who were awaiting the release of Pokemon Go in the country where the cutesy monsters were born. According to a recent Bloomberg report, the game was officially available in Japan for Android and Apple devices. The report said, "The release comes two weeks after the game made its chart-topping debut overseas, triggering a worldwide phenomenon that added as much as $20 billion to the market value of Nintendo Co. Shares rose as much as 6.9 percent in Tokyo."

Japan's National Center of Incident Readiness and Strategy for Cybersecurity (NISC) has also advised fans to download a weather app so Pokemon hunts don't land them -- improbably -- in the path of a tsunami or climate-related dangers.

Heat stroke is a constant worry this time of the year so players should wear a hat, the guide advises, adding that parents should snap pictures of Pokemon-hunting kids for rescuers in case their young ones get lost.

"Dangerous places" should be avoided at all costs, and gamers should never meet up with someone who contacts them online because they could be a real-life monster, it cautions.

A caption featuring a pair of cartoon Wild West cowboys warns about robberies and other troubles that players elsewhere have recounted. It added,

"There have been reports that players have gotten run over, fallen into water, gotten bitten by a snake or robbed."

The list is the latest in a slew of warnings issued worldwide since the hugely popular smartphone app was launched recently.

It has already been blamed for a wave of crimes, traffic violations, and complaints in cities around the globe.

Pokemon Go has been released in more than 30 countries and is expected to be launched imminently in Japan, where Nintendo created the franchise two decades ago.

The app challenges players armed with their smartphones to roam the real world in search of cartoon monsters to capture and train for battles.

The app, spotted by Business Insider, is titled "PokéDates" and aims to set up prospective partners by matching single Pokemon Go players together after they have answered a few questions to the PokéDates matchmaking team, then sending them on pre-arranged Pokémon hunting dates through their city.

The service coordinates the entire Pokémon Go date, from selecting the match to finding a time based on members' provided availability, and selecting the most convenient PokéStop or PokéGym to meet up at.

While "PokéDates" will initially only be available in the US, the app had reportedly already clocked up 2,200 new signups, with 10-15 new ones occurring every minute, within a few hours of being launched live.

Project Fixup has hinted that wider roll out could take place in coming weeks and months if the service proves popular.

It's safe to say Nintendo's hit mobile game Pokemon Go is more suited for playing in the clean, well-lit streets of San Francisco or the impeccably-maintained parks of New York.

Anarchic Lagos on the other hand, with its seemingly suicidal motorcyclists, festering sewage, and prowling thieves, doesn't appear to be the ideal place to go hunting virtual creatures.

But some locals in the West African megacity think nothing of braving the chaos to catch them all.

"Here it's like Mad Max, you've gotta be sharp or else there will be some injuries," Timi Ajiboye, a 23-year-old software developer, told AFP.

"Sometimes it's just not safe to bring out your phone. If you do, thieves will come at you like flies," added Ajiboye's younger brother Tade.

Playing may be dangerous yet Nigeria has its perks, insisted the 19-year-old electrical engineering student at the University of Lagos.

"There's so much rare Pokemon here because it's not a mainstream country," Tade said. "Fortunately for me, I live here."

The 19-year-old explained that he's seen "quite a few Bulbasaur" though hasn't been able to catch the green dinosaur-like species since "they are very stubborn".

Like many other players around the world, the Ajiboye brothers found a way to download the game when it was released early this July, despite it being officially available only in the United States, Australia and New Zealand.

The enthusiastic uptake is a sign of the mobile revolution happening in Nigeria, which is Africa's largest mobile market.

Companies have committed to 3G coverage in 90 per cent of the country and are starting a fibre network roll-out in six cities, according to Bloomberg News.

The union for imams in Turkey called for a ban of the game, which overlays play on the real world, on the grounds that it insulted Islam.

Head of the Diyanet-Sen union of imams Mehmet Bayraktutar was quoted by Haberturk daily as saying the game "undermines the significance and value of places where people worship" as users try to find Pokemon even in mosques.

Bayraktutar even went as far as to suggest the game was a western plot against Islam. "I condemn this, I want it to be banned in Turkey."

His comments come a day after the Auschwitz museum asked the game's makers to block players at the former Nazi death camp out of respect for the dead.