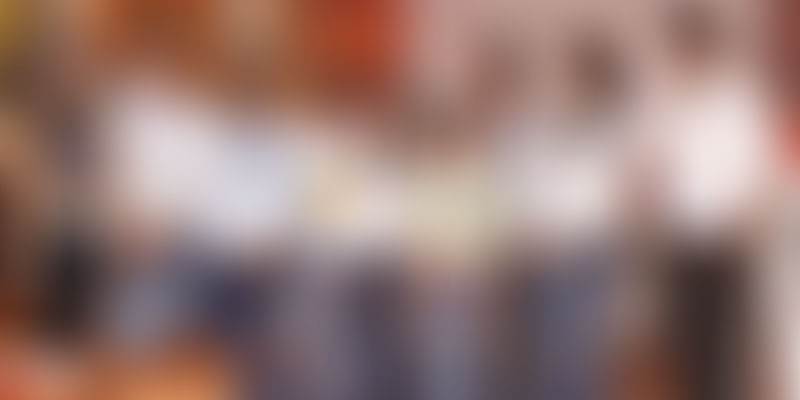 An alumnus of Chitkara University, Akshay Ahuja was bitten by the entrepreneurial bug at the age of 19. In the second year of his college, he undertook two projects-teaching school students basic circuits and electronic-related concepts, and a six-week industrial training for B.Tech students.

Luckily, he managed to get 29 B.Tech students from all across Chandigarh to train them on the use and functioning of Atmega8 IC technology. Building a teaching centre while still a student was a challenging task. The students were provided training on the roof of a building under construction.

RoboChamps creates robotics modules for students to help understand various scientific and technological concepts. These modules are made keeping in mind the relevance they hold to the different scientific and mathematics concepts students learn in schools.

According to Akshay, the components for every kit are sourced from different parts of the country, including Delhi and Chennai. Some more sophisticated components like breadboards are imported from China. Currently, RoboChamps has close to 40 such modules.

The startup conducts workshops in its academies and has tied up with various schools to conduct open workshops. With the intention of giving back to the society, RoboChamps also conducts free workshops in slums.

We do not rent out or buy entire properties for our academies. Instead, we have tie-ups with different schools and organisations that allow us to use their premises for the required hours of coaching,” explains Akshay.

Akshay bootstrapped RoboChamps with his own money of Rs 20,000. More than the financial hurdles he found it difficult to get the right set of talent that was equally motivated. Other challenge he faced was the multiple rejections from schools, which found it difficult to trust a young entrepreneur.

In January 2013, RoboChamps' module was rejected by close to 50 schools. Akshay one day visited a well-known school in Jagraon, a district in Ludhiana and got the chance to meet the principal, who was impressed by the learning method. That’s how RoboChamps got its first client.

Overcoming all the initial hiccups, RoboChamps just started to take off, when Akshay’s co-founder scooted with all the money the company earned in the initial few months. With no resources left, Akshay had to put in a considerable amount of money again and start from scratch.

Today, RoboChamps has 10 academies and 50 teachers who regularly conduct classes and workshops in different cities in Punjab, Haryana and Himachal Pradesh, and has covered more than 500 schools and reached 20,000 students.

Creating a network of schools

RoboChamps will be conducting an event, Build Your Bot, on August 28, in Gurugram. It is set to bring together around 20,000 students and help RoboChamps associate with more than 100 schools from Delhi-NCR region as well.

For the upcoming Build Your Bot event, we require a good amount of money. But all of that will be raised through students’ fee and sponsorship deals. The money raised through the event will be used to open more eobotics academies in the coming years,” Akshay adds.

The robotics courses are priced at Rs 1,600 per month for a 16-hour training period, including training services. The company targets students from Classes III to XII. By the end of 2016, it is looking to open 32 robotics academies, in cities like Ludhiana, Jalandhar, Bathinda, Amritsar and Chandigarh.

A recent report by Research and Markets estimates that the global industrial robotics market was $28.22 billion in 2014, and is predicted to reach $41.18 billion by 2020 at a CAGR of 6.5 percent for the period. Schools are now increasingly focussing on incorporating robotics learning as a part of the regular curriculum, and startups have sensed this as a huge business opportunity.