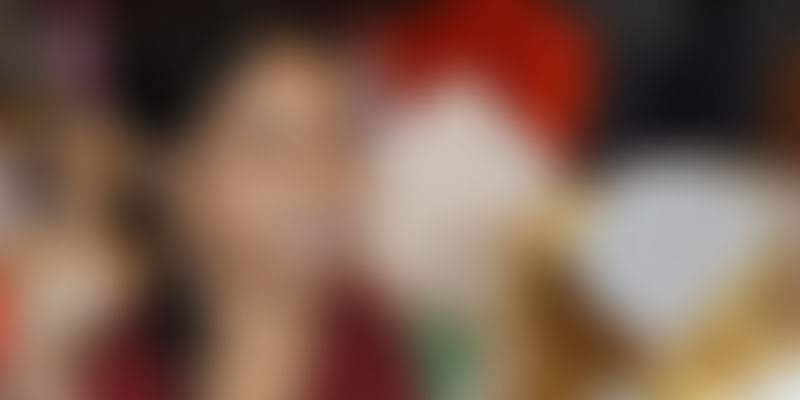 This powerhouse is undeterred by the challenges life throws at her every day — be it fighting with the law makers in Delhi for better accessibility for the disabled, or travelling across India, where the public transport does not allow ease of travel for the differently abled.

“Our society as a whole is lacking only in one thing, i.e., accepting the fact that disability is physical, not social. It is their psychological mindsets which let them believe there is no life for persons with disability,” says Suvarna.

When she was two, polio affected both her legs, and now the 34-year-old suffers from 90 percent disability. She can’t walk without the use of crutches, and for the last few years she has been on the wheelchair, but neither of it has stopped her from being an achiever — playing for the country and fighting for the rights of people with disability.

With almost 12 years of experience in the field, she has an association for disabled people. She also works as a volunteer with Viklang Sahara Samiti and is currently working on the ‘Accessible India Campaign’, a nation-wide flagship campaign by the Ministry of Social Justice and Empowerment (Department of Empowerment of Persons with Disabilities) for achieving universal accessibility for people with disabilities.

Para sports – on field and off it

Suvarna is an international para table tennis player. In 2014, she participated in the Asian Para Games in Korea, and has won two medals at the Thailand Para Table Tennis Open 2013 held in Bangkok.

She developed a keen interest in sports when she was young and staying in a hostel for close to seven years, and that love for sport has continued unabated since. Earlier she used to do power lifting, but now her focus is on table tennis. She has been playing at the national level for a long time and has enjoyed representing India at the international level too.

However, para athletes, she says, “Don’t get half the facilities that able-bodied sportspeople get, and women with disability are worse off vis-à-vis their male counterparts.”

She is fighting for development of accessibility, and better facilities and resources for women in para sports to ensure that they are not marginalised. For her efforts in this direction, she has bagged awards such as the National Women Excellence Award in 2013 for Sports and work for disability, and the Karamveer Puraskar by ICONGO in 2015.

A new chapter of life

Suvarna’s own journey has been very interesting. Born and brought up in Nagpur, she completed her education from Nagpur itself. She studied BCom, B.Ed., and M.Com from Nagpur University and an MSW from IGNOU from Delhi.

She continued to be a sportsperson but has also worked part-time in a bank and at a computer centre. Her friends, family, and people around her have always been very supportive, but better accessibility would have made things easier, and that is why she decided to take up the cause for others who were in the same boat as her.

Sports has been an integral part of her life, and it was at a sports meet that she met her husband, Pradeep, in 2006. She was attending the National Sports Meet for the disabled in Delhi. “We talked, just like strangers, and became friends, sharing the same interests. I liked his wit and intellect. It was nothing like the romances from the movies, but when my sister found my eyes sparkling with affection for him, she encouraged me to take this relationship forward,” she says.

Since Suvarna was on crutches, she was hesitant, for though Pradeep too was a person with disability, he was not using any support aids like her. Overcoming her hesitation, she approached him and their relationship was formalised. “Now, it seems like any Shah Rukh Khan movie scene where boy and girl remain in a long-distance relationship, looking out for a single occasion to meet the other.”

My marriage was a turning point since the support I received from Pradeep gave my dreams a pair of wings, and the confidence to fly and dive into the challenges before me. I have never stopped since.

Suvarna believes that destiny smiled upon her and her dreams came true. “My parents could have married me off to someone in my hometown, or maybe I would never have been married due to my disability,” she says.

Though marriage has been beautiful, her biggest challenge was dealing with the loss of their baby girl just after the birth. It was a time when even she survived death. Over the years, her son Prasoon has been a source of immense happiness in her life.

Duty and not help

Suvarna makes a very valid point when she says,

The government and local bodies need a positive attitude towards people with disability, besides keeping in mind that helping disabled persons is part of their fundamental and moral duties.

And to the people with disability, her message is, “Stay positive, work hard, and overcome each challenge of life.”