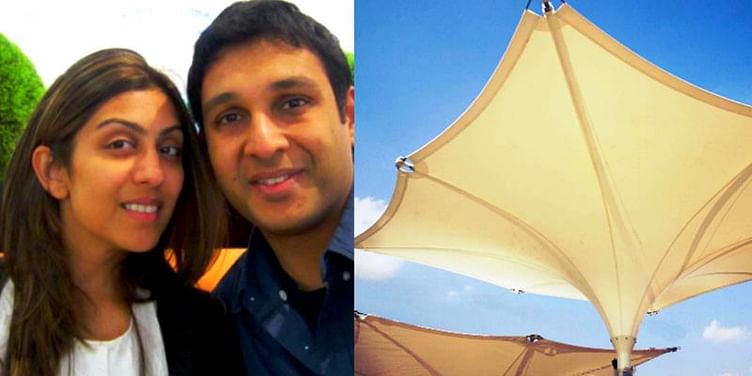 According to the United Nations, water use in the last century has grown at more than twice the rate of population increase. It is estimated that water demand will surpass the supply as early as 2025. The water shortage in India, Prime Minister Narendra Modi’s commitment at COP21 and the push by companies towards being environmentally conscious all happened at once, in 2014. A couple passionate about conservation – growing up on books and watching documentaries around wastage around the planet, like Stephen Emmott’s 10 billion – put their grey cells to work to do their bit to save the blues and greens.

Priya Choksi spent her early years as an architect in Atlanta where she has worked at John Portman, a large architecture and real-estate investment fund, and later moved back to India to co-­found a green building consulting firm, which has certified over 3 million sqft of green building space. Samit Choksi, her husband and co­-founder, has previously co­-founded and worked at various start­ups in India and Silicon Valley as a software architect and developer. The couple have filed several patents on their clean-tech inventions.

After living, studying and working in Singapore, London, Atlanta and the Bay Area, the couple’s experiences motivated them to build products that could help India move up to the level of global standards in environment conservation. With a love for nature and the environment, they wanted to realise their dream of building simple, affordable and intelligent products that influence user behaviour to conserve earth’s natural resources. Thinkphi,their stride in cleantech, aims to build sustainably engineered products that help intelligently conserve water, energy and waste.

Their first product is an indigenous production – Ulta Chaata, a patented system that smartly converges rainwater harvesting and renewable energy for open spaces in smart cities, industries, or large campuses. “While we looked at solutions around reducing debris waste in large cities and wet and dry waste in households we narrowed down to building our current product which is a convergence of clean water and energy,”explains Priya.

It is exactly what it sounds like – rather than an umbrella with a convex top, this one has a concave structure such that it collects the falling water like a bowl, that trickles down the stalk into the ground, where there is a collection and filtration mechanism. Through activated carbon filtration, it filters rain water below 10 NTU (as per WHO standards for potable water). A single unit harvests upto 1,00,000 litres of water annually.

It lets you go net zero on water, as one gets connectivity of multiple units to reduce their demand from the water grid and tankers. The Chaata pays for itself in four years.

Ulta Chaatas are best installed in clusters of over 10 pieces, wherein each Chaata takes up no more than 1 sq. ft. of real estate, and provides a catchment area of 360 sq. ft. in turn. Each unit also has a RF sensor, which is wirelessly controlled through the phi­box. “Our current product is IoT enabled. We build our own controls and sensors and write our own code which sits in what we call the ‘phi­box’ components, like the solar panel, battery management, lighting systems, water meter, self-cleaning filters are controlled through the box,” Priya says.

Moreover, the set up doubles up as a solar device, as it stores solar energy in the day and provides live lighting at night. It has net metering on excess power, which is connected back to the grid.

Dealing with a twisted world

The couple filed a concept patent before they had finished the invention. “Once we started building our first few prototypes, we filed another patent on our utility and design of our system. Our investors share our vision of investing in R&D and creating IP in the company. We spend almost 20percent of our budget towards R&D,” Samit says.

With a business that requires a mindset change for product acceptance, the couple has braved the perils as well as the perks of doing social good. “The ups have been raising money and the downs have been waiting for it. We lived on zero salary for the first year, while trying to move into a new house, new office, and hiring staff. We were lucky to have good customers like Godrej who believed in us and suppliers who extended credit,”Samit

They do not execute projects but use a partner network that does the civil work onsite. Pumping in USD 1 million into the business through their personal savings and a small FnF round, they have sold 30 units so far, and clocked Rs. 1 crore in revenue last year. This year, they’re targeting sales of 300 units, tapping into the burgeoning smart cities and meeting their sustainability needs.

“We are trying to build a platform that reads, collects, analyses and provides environmental data to influence a behavioural change,”Samit quips, adding thattheir target market is the top 100 companies.

The companies they are targeting in the first year are all GRI certified and/or greenco and/or LEED certified. Some of them have very active CSR programmes so they contact Thinkphi for specific projects – like a large paint company that called them to implement 25 units of the Ulta Chaata.

There are add-on modules that they have come up with,for example a mobile charge unit and larger solar capacity upto 1.5 KW.

Thinkphi’s long-term goal is to address a global market for environmental goods, which is targeted to reach $1.9 trillion by 2020. The overall environmental technologies market in India including goods and services is almost $15 billion. With the growth of urbanisation and water scarcity in India, Thinkphi’s Ulta Chaata can become a much needed solution for smart cities and businesses in India and globally.