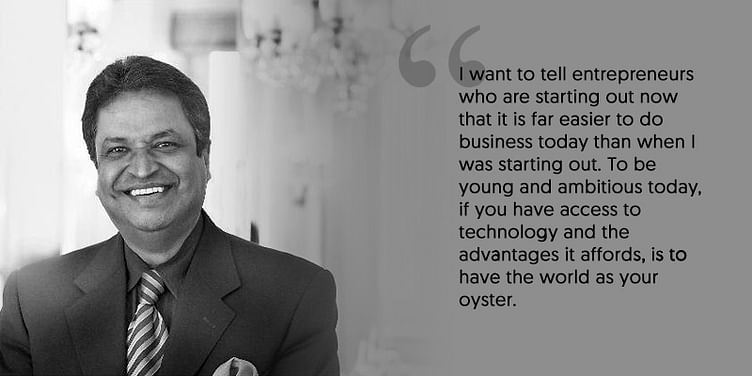 Usually, third-generation entrepreneurs from established business families are born with the proverbial silver spoon, which makes their startup journey much more conflict-free than those bootstrapping their ideas to reality. While Binod Chaudhary’s comfortable middle-class upbringing can in no way qualify his story as one of those imagination-firing rags-to-riches one, neither can it be grouped in the former privileged category. Nepal's first, and only billionaire, Binod is a self made man through and through.

In the late 19th century 18-year-old Bhuramal Chaudhary left his ancestral village in Rajasthan in the hopes of making a better life for himself and ended up in Nepal, and began trading in textiles there. Over a lifetime of effort he managed to build a small textile store. After his death, his son, Lunkaran Chaudhary, took over the reins of the business and transformed it into Nepal’s first department store, Arun Emporium.

A legacy in the making

Binod Chaudhary, the eldest of Lunkaran’s three children, had a strong sense of the legacy he was inheriting when time came over to step into his father’s shoes. He says, “I take my grandfather and father to be my biggest examples of courage and grit. My grandfather left Rajasthan at a very young age to sell Indian fabrics and textiles in Nepal at a time when there were no roads. My father took whatever my grandfather had built to the next level. He dabbled in various businesses, from construction to fabrics, and began importing and exporting products from Japan and Korea. It was he who dreamed of a manufacturing industry in Nepal. Though he could not complete that, he laid the foundation for it which later helped me when I was establishing Wai Wai.”

Binod, like his grandfather, had to start his working life at eighteen because a cardiac scare forced his father onto bedrest. Prior to this he dreamed of becoming a chartered accountant but had to leave his studies midway to shoulder family responsibilities. He states

My father was ill. I had no choice but to step into his shoes. We didn't have an extensive organisation with hundreds of employees. Ours was a small family firm and my father had been the main managing force. I would have liked to do study further, but was required to do my duty. So I did it.

The family business was a thriving department store that imported textiles from Japan and Korea. Lunkaran’s vision of establishing a manufacturing industry in Nepal had led him to set up various businesses. However his ailing health and the poor infrastructure in Nepal meant that these were in rough shape. When Binod took over the reins he had dreams and plans of his own.

“Each generation of entrepreneur in my family have had their own unique set of difficulties. What is common between us is our ambition. Neither of us have been content with our god given lot even if it could have resulted in a comfortable life. Anyone who's ambitious and dreams big has to be prepared to accept the challenges their ambition presents them with. My grandfather could have chosen to be a small farmer in his tiny village in Rajasthan. Because he did something different, here I am today,” he says with pride.

While Binod was busy learning the ropes of the business from the ground up, a chance observation proved to be the hunch of a lifetime. “At the airport I would observe that people travelling back from Thailand would return loaded with noodle cartons. I figured that these were high in demand with their relatives back home. I concluded that there was business to be done here,” he says.

The flour mill which supplied the family’s biscuit factory was used to supply a small plant was then set up to manufacture noodles. Wai Wai Noodles, as Binod christened it, proved to be wildly popular in Nepal and was gradually expanded to India. Now his moniker is Noodle King and he controls two percent of the world’s noodle market.

While it’s easy to fantasize over the perceived overnight success of this venture, the truth of those early days loom over his memory. “For every small issue there was paperwork to be done. My day used to start by going to government offices and doing the rounds. Everything required a license. Everything required somebody or the other's permission,” he recalls. But he is also quick to remember the good of starting up in Nepal is the eighties. He adds,

In hindsight I feel things were not as difficult in Nepal as they are now. There were not so many rules and regulations. Things were far more investor-friendly.

Wai Wai granted Binod success and stability and established his calibre as a businessman to the world. But he was not satisfied. He says, “Everyone dreams of conquering new frontiers. I always felt we were competing internationally in my own home turf when companies from India and China came to Nepal to sell their products. And I thought, why can't we do that?”

Binod had been travelling to Japan for business ever since he started working. Observing the Japanese at their work influenced his own attitude towards entrepreneurship greatly. He says,

Japan in the seventies had the kind of global companies and outlook that I think didn't exist anywhere in the world. Companies like Mitsubishi, Suzuki and so on. Japan is a tiny country and boasts of hardly any natural resources. Yet their success defied all odds and expectations. This attitude has inspired me tremendously.

With this in mind, he felt confident in taking the next leap in his career: “By the 1990's we had accumulated a fair amount of national success and business knowledge. We felt that this is the right time to create Nepal's first multinational. Life was also becoming a bit difficult in Nepal in the sense that the political uncertainties were beginning to influence the business landscape. Maoist insurgencies had just started. So we decided that to keep the business growing it was best to branch out to other countries.” Chaudhary Group’s first foray beyond Nepal was in Singapore, where they set up Cinnovation, effectively birthing the first (and only) MNC from Nepal. This expansion helped propel the Chaudhary fortune to the billion-dollar club.

Where entrepreneurs are made

In crystallizing insights from his own journey Binod shares his sentiments on what goes into the making of entrepreneurs of steel.

"I did not have a mentor. Neither did I go to a B School. Working in the family business involved travelling to Japan frequently and this has had the largest impact in my professional life. I learnt a lot by working with the Japanese and observing their ethics of team work, meticulousness and systematic efficiency, their tendency to finish all the day’s work and never keep anything pending.

The big name B Schools of nowadays do add to your knowledge and exposure. But they are not integral to an entrepreneur's education. Those skills and talents are found outside the classroom.”

Instead he espouses three character traits that individuals must embody if they are to become successful entrepreneurs.

First and foremost, you have to be a dreamer. Then you have to keep dreaming the same dream until you achieve it. You can't envision one thing today and then jump ship to another idea tomorrow. No entrepreneur has the luxury of having enough time or resources. To my mind the management of these two resources is the most critical ability all entrepreneurs should master. Know when to spend, how to spend and where to spend.

Speaking of his own journey, he adds, “By now I've been an entrepreneur for more than forty years. We have built a strong organization with vibrant offices across Asia from Sri Lanka. Dubai, India, Singapore and all over Nepal. We have created many different businesses and received recognition for our work. So I am sure I must have done something right. Today our confidence level is at a completely different level than when we were starting out. I enjoy every moment of what I do. I feel that the process has become much more exciting. It seems that yesterday we were fighting to establish ourselves. Now the sky is the limit. The nitty-gritties of day to day business management doesn't faze me anymore. I am more concerned with the bigger picture. I started all this in Nepal at age 18 when I wasn't concerned with starting up. Yesterday the battle was for survival. Today it is about challenging limits.”

An anecdote from his early life illustrates his success aptly. Binod recalls being sixteen and visiting Mumbai for the first time. The hustle and bustle of the ‘city of dreams’ was a world away from the tiny mountain country he called home. He stood in front of the Taj Mahal hotel and was transfixed in awe of the grandeur before him. He wanted to go in but was intimidated. “We were not used to seeing five star hotels in Nepal. Even today the Taj Mahal Hotel is an overpowering sight for simple folks. I was intimidated but also curious. I wanted to walk in. But the gentleman friend who was escorting me was terrified. He said, ‘Don't go in. Tumko nikal dega (they'll throw you out).’ So I didn't risk it.” The hospitality branch of his business has since partnered with Taj Hotel Resorts in a number of countries.

The other day someone was asking me why I didn't enter the American market yet. I told him that America doesn't excite me. The field is over-saturated. It is here in Asia and the Middle East that I am most excited to make my mark.

When asked what he considers his biggest success, the answer comes easily. He says, “Hands down it’s Wai Wai. It gave us the size, scale, recognition and ability to grow into what we are today. But what I consider my biggest achievement is to take the plunge and go global at a time when we had limited resources and were facing tumultuous uncertainties. Having had the courage to do that is what makes me satisfied.”

As for failures, he says that ups and downs are a reality of doing business. One shouldn’t take the lows too seriously because they are inevitable.

The biggest failure is probably having lost out on this deal in Mumbai. It was a fifty-fifty joint venture that required very little investment on my part. It was a highly lucrative deal and I lost out on it due to a mere technicality. It was not so much a failure as a judgmental error. As with all failures, I learnt valuable lessons from that experience which serve me well to this say.

Binod’s advice to aspiring entrepreneurs is to be creatures of their time. "I want to tell entrepreneurs who are starting it now that it is far easier to do business today than when I was starting out. To be young and ambitious today, if you have access to technology and the advantages it affords, is to have the world as your oyster. Whether you are from Kathmandu or Timbaktoo it doesn't matter. Capital will follow a good idea if you are willing to follow that idea up with good old fashioned hard work."

"Don't feel constrained by what you don't have- be it money, a business background, etc. If Jack Ma can do it from China, if Jan Koum can do it from Ukraine and if I could build this from Nepal- then anyone can do it. Be creative, take advantage of this wonderful networked world in which you live and go full steam ahead.”