Lessons for India from Uber’s goodbye to China 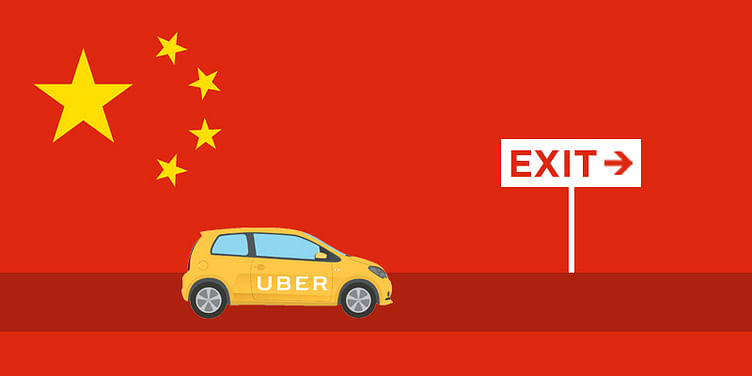 As Uber leaves behind the Middle Kingdom and its 1.4 billion people, it is widely speculated that the ride-hailing giant will redirect its resources to conquer the land of 1.3 billion next door: India. Uber follows in the footsteps of its American cousins Google, Facebook, and Amazon, which have all wilted in China but thrived in India, raising the questions: Why have US tech companies consistently failed in China, yet enjoyed relative success in India? What will this mean for India’s startups?

There are three parties that have caused US tech companies to succeed in India whilst failing in China: the consumers (the guys the companies fight for), the local competition (the guys they fight against), and the government (the guys that decide whether they get to fight at all).

As Yi Shi, CEO of Chinese startup Avazu, has said, “For a large market like China, you will need 100 percent localisation to compete with local players.” Chinese consumers are so distinctly different from their American counterparts that localising in China has either been too difficult or too costly for American companies.

For instance, when eBay and Amazon entered China, Chinese users, like American users, could only view seller reviews. The problem was that Chinese users wanted to talk to the seller, develop a relationship, and haggle — similar to an in-person shopping experience. eBay and Amazon failed to meet this need, perhaps because they wanted consistency with their American product, while Alibaba understood the Chinese consumer and incorporated a chat feature in their product, Taobao Marketplace.

Amazon’s failure and Alibaba’s success in China are rooted in their underlying philosophy. Jeff Bezos has long claimed he wishes to build the most customer-centric company in the world. Jack Ma, instead, says “Our proposition is simple: we want to help small businesses grow by solving their problems through internet technology. We fight for the little guy.” Amazon provides a great buyer experience via centralised control akin to the Chinese government. Alibaba provides a great seller experience and then lets the free market run as wild as the Wild West.

Amazon has only two million sellers worldwide; Alibaba has eight-and-a-half million sellers. As a result, seller competition on Taobao is fierce, with small businesses differentiating themselves by service quality, delivery speeds, price, etc. As anyone who has used Taobao will tell you, there is the usual risk of fakes and scams that one often won’t find on Tmall or even Amazon Marketplace — but that’s the point: price-sensitive Chinese consumers are willing to invest the time to find the right product in exchange for a wider range of potential consumer experiences.

The Chinese value for variety manifests itself in WeChat, China’s most popular message app with 570 million daily active users. The app is stuffed to the brim with ride-hailing features, personal QR codes, video messaging, voice messaging, payments, location reporting, finding nearby users, and much more. If WeChat is feature-rich, WhatsApp is a feature-pauper. In truth, WhatsApp follows the American school of user interface design: a few perfected features that meet the majority of user needs, over many mediocre features that clutter the experience. Unfortunately, the American preference for interface simplicity is directly opposed to the Chinese preference for interface expressiveness.

Localisation is easier and cheaper in India. At the outset, the prevalence of English in urban India means that often the American version of a company’s online product is already viable, which is not true for China. Unlike Chinese consumers, Indians are yet to be treated to ordering a book and having it delivered to your door in two hours, or the joys of personal QR codes, or an infinitude of impossibly cheap products on Taobao. Which is to say, unlike Chinese consumers, Indians haven’t been spoilt enough to know what they want and develop a truly distinct consumer identity in terms of both user experience and user interface. Amazon or Uber or WhatsApp in many ways have less to do and less to spend to wow and woo the Indian consumer and the Chinese consumer.

While Uber China’s deal with Didi Chuxing, which controls over four-fifths of the Chinese ride-sharing market, has been interpreted by many as an acceptance of defeat, the deal brings an amicable end to an unsustainable two-year price war. The burn-cash-till-the-competition-burns-out strategy that Amazon and Uber have taken in India couldn’t work in China. Uber is reported to have lost $1 billion per year subsidising rides — sometimes discounting at 90 percent, or offering free rides. The casualties were high for Didi as well, which means both sides had a lot of pawns (i.e. cash) to kill before the armistice. Uber China had $1.2 billion in its wallet; Didi had $10 billion, which means Uber was fated to lose the price war.

Uber China’s resources paled next to Didi’s, Amazon China’s paled next to Alibaba’s. But Indian startups, even the unicorns, are still too small to fight as long and as hard as Chinese startups. In June of this year, Jeff Bezos announced that Amazon plans to invest an additional $3 billion in India, which brings Amazon’s total investment to $5 billion in the last two years. Snapdeal has raised a total of $1.54 billion in five years, and Flipkart has raised $3.15 billion in seven years. In absolute terms, Amazon has more financial resources and an incomparable technology infrastructure (while Flipkart has shown us that flowerpots and bombs are not the only things that blow up during Diwali).

Uber and Amazon entered India with perfect timing. The local competitors have already done the hard work of building understanding of market challenges, paving the infrastructure for logistics, and priming the consumer for product acceptance. But unlike Chinese companies, they have not surmounted the final challenge of establishing stable market dominance by refining their product and brand to perfection.

The mythology of many great civilisations has taught us that the gods can be fickle, irrational, and angry, and when they are, lowly mortals that wish to come out alive better have someone willing to hold up a mountain with his pinky. So it goes with the Chinese Communist Party. Whether the company is Chinese or foreign, part of business is performing the necessary rituals to appease the right powers (in China this is known as “building networks of influence” or guanxi or 关系). Throwing Google-esque tantrums about such fine morals as anti-censorship means getting thrown out.

The Great Firewall has provided protection to many large Chinese tech companies by keeping out the likes of Google, Facebook, and Twitter. India has no Biadu or Weibo or Renren of its own because American companies filled the spot before local startups could grow enough to compete. Tech in China is like the highly regulated retail space in India, where IKEA, Walmart, Starbucks, and many other foreign brands struggled for over a decade to enter while they grew in China.

While Indian regulators have on the rare occasion stood their ground against foreign tech companies (e.g. Facebook’s Free Basics), they have been far more hospitable, welcoming — and most crucially — detached. China Investment Corp, China’s sovereign wealth fund, is an investor in Didi as well as in Alibaba, which is also an investor in Didi. The Chinese government had big stakes in Didi’s success. To substantiate this, the Chinese government announced last week that it would legalise ride-hailing in November, but would prevent setting rates artificially low “to push out competitors,” and that’s a finger pointing at Uber’s subsidised rides.

The foreign media has been keen to represent Uber’s exit as yet another indication of the selectively protectionist, free market throttling of China’s authoritarian government. In spite of the government’s clear preference for domestic firms, I vehemently disagree with the claim that American firms have failed because of the Chinese government. Handwaving away every foreign failure to the Chinese government presumes that companies like Alibaba and Didi get an 80 percent market share by nepotistic means while being equal or inferior to their foreign competitors. Sounds pretty presumptuous, but let’s face it — democracy-dwellers love sticking their noses in the air when it comes to China.

Of the hundreds of articles that have whined about how Xi Jinping personally slit Uber’s throat, how many have lauded Didi? Didi offered a far larger product line that included taxis, private cars, express travel, free rides, buses, and designated drivers, and we’ve already discussed how the Chinese consumer feels about variety. Didi enables users to pool together and provides affordable intercity rides comparable to train fares during Chinese New Year, when millions of people traverse the country to join their families. Didi’s app is easier to use under poor data conditions. Didi can be opened through Alipay and WeChat (thanks to shareholders Alibaba and Tencent). Didi has initiated plans to extend into car sales, insurance, financing, maintenance, etc. Unfortunately for Uber, this is not the end of the list.

So while government regulation has incubated Chinese tech companies, many of these companies have earned their market dominance by providing a great product uniquely suited to the Chinese consumer. Could Uber have eclipsed Didi with a better regulatory environment? Maybe.

What will the rise of US tech companies in India mean for domestic startups?

India will continue to face the risk of foreign players entering the market to usurp reigning unicorns. Some grieve, claiming India will never be able to grow great startups without some incubation from outside players with better access to capital and established technology. Some speculate Ola will soon be wiped out, as will Flipkart. If we don’t want India to be a market colonised by foreign companies, what can be done without caging the free market in regulations?

Indian startups have two options: grow bigger, grow smarter. Either they get a ton of money (knowing foreign companies will almost always have more); and/or they accept that free market competition is good for the consumer, they get to know the consumer better, and they meet their needs more effectively. Needs can be met in one of two ways: spreading wide or diving deep.

Spreading wide doesn’t just mean expanding services, but moving into complementary sectors. In moving towards incorporating car purchases, insurance, financing, etc., Didi is building an ecosystem that enables it to be involved in the consumer’s full transportation life cycle from ride-hailing, to owning one’s own car, to maintaining it. Chinese companies have historically built vast ecosystems that enable them to expand rapidly into new markets to augment the core business. Think Alibaba, which is involved in sports, health, travel, entertainment, etc. as a way to utilise and improve its data on users from its e-commerce and payments businesses.

Diving deep means investing heavily in perfecting the user experience. If you asked a Chinese user if she would prefer to buy a given product on Tmall or Amazon assuming the price is the same, you would almost certainly hear Tmall. If you ask an Indian user about Flipkart or Amazon? Personally, I prefer Amazon, and I know I’m not alone. And what about Ola versus Uber? Personally, I prefer Uber, and I’m definitely not alone here. The fact is that neither Flipkart nor Ola has built the brand loyalty, the service quality, and the predictably low prices that would make Indian consumers stand by them to the battleground. They built products that functioned, not emotional attachments that would stand the test of potential infidelity with a foreign competitor.

If there’s one lesson to be learnt from Uber’s exit from China, it’s that Indian companies need to watch their backs by watching their consumers’ needs.