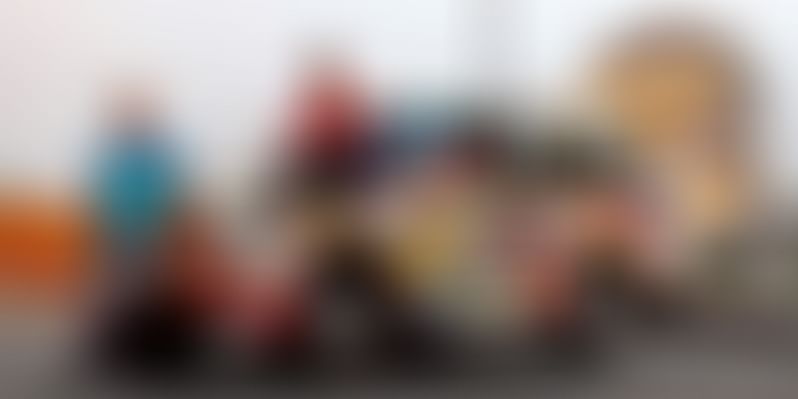 If you are an artist, you are often subjected to societal perceptions of creativity. During the initial days, you are often underpaid and more often, not recognised for your work. From "log kya kahenge" to "tumhe rishta nahi milega," you have heard it all.

Having taken every challenge mentioned above in their stride, Manil and Rohit Gupta are an inspiration to many artists. Brothers hailing from Lucknow, Manil, 37, and Rohit, 30, entered the Indian art scene around five years ago, and have already grabbed attention with their creations that incorporate elements from a variety of sources and themes like Indian politics, cinema, gender inequality, mythology, female foeticide, etc.

The duo moved to Delhi from Lucknow in the year 1998. At that time, Rohit was still a teenager and Manil was a newbie in the art world. As fate would have it, it was at his sibling’s studio that Rohit found his true calling. He says,

A random movie triggered my mindset and I picked up a camera to experiment with photography at Manil’s studio. I started creating projects on my own and to my surprise got a job at India Today as a commercial photographer. After 18 months there, I quit the job to explore the art side of photography. Within that process, I did some exciting experiments and also exhibited at a few shows and the rest is history.

Manil’s journey was smoother — he followed his initial calling and took admission at the College of Art, Delhi. After spending enough time understanding his forte, Manil collaborated with his brother and the duo launched themselves under the banner of ManilRohit. Their first solo project was a huge success, so much so that international artist Peter Nagy wrote to them saying,

This is the art of a new, cosmopolitan India, with a plethora of references both international and indigenous.

This added the much needed fuel to their engines and from then on, there has been no looking back. Sharing his experience post the big debut, Manil says,

Since that first solo show, we have taken on very diverse and ambitious projects, something which we might not have been able to embark upon in our individual capacities. That seems to be the beauty of collaborations. Together we complement our temperaments and skill sets. Our best comes out whenever we hit a roadblock. It presents itself like an opportunity to reflect upon, so we can create a better alternative which would eventually benefit us and others impacted by similar issues. Together, we like taking upon bigger, systemic issues, rather than just being pawns of that system. It fuels us.

Turning their car into public art

Yes, you heard it right!

The duo invested about a month’s time to convert their own car into a popular public art installation called ‘the holographic love machine’. The graphics and designs gracefully point at the visually dense comic narrative the duo indulge in while using acrylic and spray cans. The art car first hit the road in the first weekend of June, 2012 and has travelled to different parts of the country, garnering a lot of attention from onlookers.

Venturing onto the small screen

The Creative Indians is a one-of-its-kind show on NDTV Good times that explores some amazing creative professionals across fields in India and essentially highlights their ideas, inspirations, and the creative process.

The Creative Indians has been incorporated as an entity to further the goals we have set for ourselves; in effect, to push the Indian creative industry in a more healthy, organised, and fruitful direction for all its participants, and most importantly, its creative souls. As of now, it primarily includes the television show, which aims at showcasing the best of creativity in India. There is more to come, says Manil.

The show intends to be the bridge between the cutting-edge art world and audiences who don’t necessarily know too much about it. Most of the impressions designed by ManilRohit talk predominantly about societal issues and empowering the usually oppressed class. Adding to this, Rohit says,

We feel, since we are constantly connected and impacted by our social surroundings, our art must reflect it somehow. Our art gives us the freedom of expression not possible in commercial projects and hence, it becomes an important tool to get our thoughts out on the human condition. While it serves as an important internal dialogue, if used intelligently, it can also be used to stimulate and provoke the audience out of their comfort zones and challenge the common perceptions. We seek to better that effect constantly.

Also read : How these 24 year olds are creating a brand for Indian ethnic and unique collection of handicrafts worldwide

Like most budding entrepreneurs, Manil and Rohit too had to negotiate the demands of a competitive world, but their intent and perseverance have remained unchanged.

This brother-artist duo has had a long journey, one that speaks of courage to follow one’s dreams and the urge to discover ways to fall in love with what you do by being instrumental in impacting a larger community.