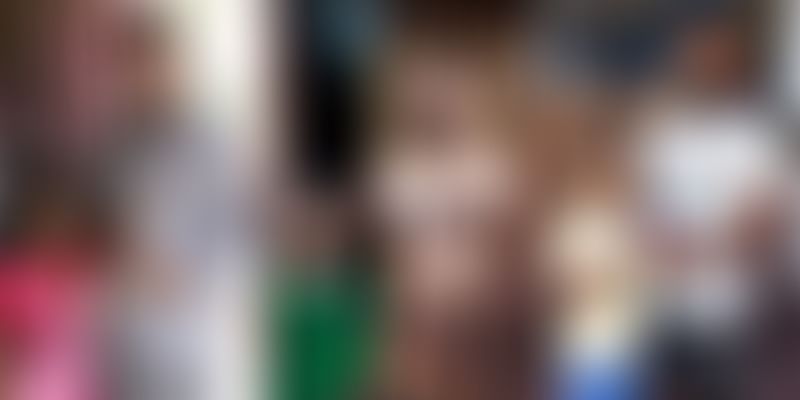 While the Ministry of Women and Child Development’s Daughter’s Day campaign on social media — part of the Beti Bachao Beti Padhao programme — is a positive move, a father-daughter duo is going a step ahead. Rajesh Ramakrishnan and Kaavya Rajesh have teamed up for My Daughter is Precious, a unique campaign to raise awareness about girl child education through photography.

“After watching a documentary called Girl Rising, I was shocked to learn that 65 million girls don’t go to school because they don’t have the resources or the support of their families. So I spoke to my father and we came up with this idea to raise awareness about this issue,” says 14-year-old Kaavya.

“Our core idea is to raise awareness that daughters are precious; they need to be valued and educated. We go to lower socioeconomic areas in India and Bangladesh and talk to the families to ensure that the daughters are valued and are being sent to school,” says Rajesh, 47-year-old Managing Director of Perfetti Van Melle, Bangladesh.

Rajesh and Kaavya also share a passion for photography, which they put to good use by taking Polaroid pictures of fathers with their daughters, and giving them copies as mementoes. As most families cannot even afford a photograph of their loved ones, their idea of enhancing their campaign through Polaroid photographs is powerful and noble.

The pictures, they say, serve as a constant reminder of the precious bond between a father and his daughter. “We chose photography as a medium. We found that most people were quite happy to have their picture taken and given to them. However, it was difficult to get the fathers to smile! Most families do not have any pictures of themselves in their houses and they were excited to receive the Polaroid pictures,” recalls Rajesh.

The duo has reached out to more than 50 low socioeconomic households in several Indian and Bangladeshi cities such as Kolkata, Chennai, and Dhaka. As for the modus operandi, they go door to door and talk to fathers to ensure that they value their daughters and make them aware of the importance of educating girls. During the course of their work, they have met people like Muhammad Jinnataul, a rickshaw puller who has two daughters, Hasi and Khushi, whom he wants to educate. Likewise, fisherman Ravichandaran is all set to fulfil his daughter Meenadevi’s dream to become a collector. They also met Machekantan, a fisherman in Andarkuppam, Chennai, who is bringing up four girls — his daughter Gayathri, his granddaughter Abhinaya, and his nieces, Nandini and Renukadevi, despite many hardships. “All of them are highly motivated and determined to educate their daughters,” says Rajesh.The step ahead

The campaign My Daughter is Precious started as a Facebook page which focused primarily on awareness about the cause. However, as the number of visitors and ‘likes’ increased, the duo decided to kick-start a full-fledged campaign to raise funds for the benefit of the underprivileged.

My Daughter is Precious then collaborated with Project Nanhi Kali, which is working with NGOs at the grassroot level to ensure academic, material, and social support to underprivileged girls. At present, Kaavya and Rajesh are running an online campaign to raise money through crowdfunding. The money raised through the campaign will be given to Project Nanhi Kali.“We wanted more than just ‘likes’, so we started and promoted our online campaign. We’re happy that it has raised almost Rs 2,00,000,” says Rajesh. He is hopeful that by the end of the campaign they will have raised funds for at least 100 girls. As per the online campaign, Rs 3,000 will sponsor a girl between grades one and five, and Rs 4200 will sponsor a year for a girl between grades six and 10.

Rajesh believes that good father-daughter relationships are crucial for a happy family. He is happy that he could do this work with his daughter and also see her grow from a little girl to a responsible young lady committed to a cause.

As for Kaavya, she simply says, “I loved spending time with my dad working on this project which is very close to both our hearts. I learned that a father’s support can help motivate his daughter to achieve incredible things.”

While collaborating with Nanhi Kali through the online campaign was their first step, the duo is all set to reach out to other NGOs in India and Bangladesh working towards the same cause. They plan to raise more money and reach out to more and more people through My Daughter is Precious.

While their joyous memories with father-daughter duos are everlasting, Rajesh and Kaavya are well motivated to continue capturing and spreading more and more smiles.