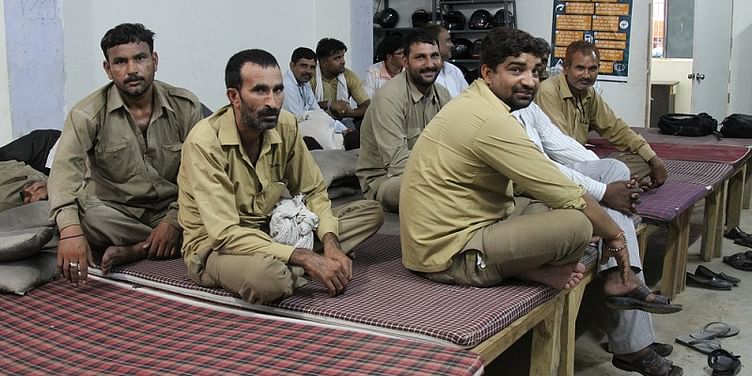 At first sight there is little to distinguish Rivigo’s ‘pit stop’ near Pataudi, 35 km from Gurgaon. The logistics company’s parking yard for trucks is perhaps a little less slushy that others in the neighbourhood.

But inside, about a score drivers are lolling on hard beds with thin durries in air-cooled comfort. The person in charge of the Delhi region station is Gaurav Rakawat, who graduated in 2013 from IIT Delhi. He was with housing.com, an aggregator of apartments, but wanted a different working experience. At IIT he had set up a website called IgniteV.com to connect volunteers with non-governmental organizations. He had also collaborated with a classmate on Bank of Karma, a website to keep track of one’s contributions to society. It is rare for a truck company to engage such talent.

But the main difference is that no Rivigo driver stays with a truck from end to end. They pass them on like relay batons after every 250 or 300 km.

‘This is the first time I am hearing of it,’ says Gyan P N Singh of Aries Express Logistics, a six-year old Delhi-based family enterprise with 15 trucks, plying in eastern India. Each of Singh’s trucks, like most in India, is a two-driver show, with one resting at any time.

Ved Prakash Two, called so to distinguish him from another by that name, joined Rivigo 18 months ago after six tyres of the Leyland truck he owned were robbed at gun point. ‘The guys were from Sohna (Haryana); they made me dismantle the tyres,’ says Prakash. A pair of tyres costs Rs 40,000 and Prakash had only third-party insurance. He had begun in 1988 by transporting liquid petroleum gas from Kandla, Hazira and Mumbai ports. His own truck was moving hot-rolled coils. The loss of tyres was such he had to sell the truck.

Prakash lives about 7 km from his place of duty.

Anil Kumar belongs to the village where the truck park is based. He has been with Rivigo for 19 months. Earlier he was with a ‘single motor malik’ who owned four trucks. He would drive all night but no longer.

Rajpal One (there are a few with that name) has been with Rivigo for one-and-a-half years. A resident of Chillad village, about 20 km from the truck hub, he was with Safe Express and Blue Dart. Rajpal left when the contract expired and he did not get a wage increase. ‘I get to rest and sleep,’ he says. ‘It has made a difference to my health.’

Ram Vir Singh is from Rajasthan’s Bharatpur district. He joined the company 10 months ago, after the vehicle he owned had to be sold owing to a division of family property. His family has moved in with him. Gone are the days when he would drive to Bengaluru, Hyderabad, Pune and Nashik from Delhi. He had come in at 8 in the morning on the day we met him. At 2 pm he had to take an empty vehicle to Delhi airport, get it loaded the next morning with stuff from e-commerce companies, and drive off to Jaipur or Agra.

Relay driving might seem a commonsensical way of sweating an asset through the day, but conventional truck owners say their vehicles with double drivers have low downtime, unless it is enforced by tollgates and tax check posts.

Operators like him do the Delhi-Kolkata route, a distance of 1,460 km, in 30 hours for ecommerce companies with two persons at the wheel driving non-stop, says Gyan Singh. A round trip costs Rs 110,000, which is slightly more than the rail rate. There is a slower service too, called ‘cargo’ in trade parlance, which will does Delhi-Kolkata in 4-5 days, with the consignor being able to keep track of consignments. A vanilla service takes 7-8 days without frills like tracking facility.

Deepak Garg, the co-founder of Rivigo sounds like a social reformer when he explains the reasons for relay driving. For him higher truck utilisation rate is a collateral benefit. “The real idea is to help drivers lead a life which is safer, respected, dignified and more comfortable than the current environment,’ he asserts.

There is a severe shortage of truck drivers. Garg puts the demand at about a million per year. Driving is the least preferred vocation. Garg calls it the ‘37th caste in a village.’ It is so low down in the social hierarchy because drivers do not have a social life, as they are on the roads all the time. The physical abuse they endure makes them take to drink and other vices. They do not have much of a family life. Risky behaviour creates safety issues which can impose onerous costs on a trucking company.

‘The social profile does not change if you do not change the fundamental working environment,’ says Garg an alumnus of IIT Kanpur and IIM Lucknow, who became an entrepreneur in 2014, after a stint with McKinsey, a consultancy.

You cannot say Oh! I will start celebrating truck drivers give them respect, till the time social context around his trade does not change.

Putting corporate social responsibility ahead of profit maximization may not seem like a sound business philosophy. Perhaps there is no dichotomy if satisfied drivers (or pilots as Rivigo calls them) mean improved productivity.

Apart from a break from insane working hours, Rivigo drivers earn about Rs 24,000 a month, including Rs 6,400 food allowance. Drivers are selected for proficiency, ability to read clients’ documents and road signs.

The trucks are tracked via satellite. They are equipped with sensors to monitor efficiency, check for wear and tear so a vehicle can be taken out of the loop in time, and eliminate fuel pilferage. ‘We are 99 percent paperless,’ says Utkarsh Jain, an alumnus of IIT Delhi and the lead for operations planning and control.

The trucks are leased from Ashok Leyland, which has the maintenance contract. J K Tyres does not charge upfront; the tyres are paid according to distance travelled, a practice followed in the developed world.

For Garg, logistics is a sunrise industry. He sees scope for huge efficiency gains as the cost of logistics drops from 15-16 percent of GDP at present to about 6-8 percent, as in the United States. The goods and services tax will make a big difference, he says. It will allow fulfilment from the plant, which means zero inventory.

The issue with inventory is it is an asset on the balance sheet. It is nobody’s baby. No one looks at it. But it causes a lot of wastage. Every two years a number of companies write off obsolete inventory. It does not get calculated as logistics cost.

Within the logistics business, Garg sees big opportunities in moving fruits and vegetables (F&V) in climate controlled conditions with minimal wastage. Currently, the reefer trucks are used by pharma companies, pizza and chocolate makers and those supplying fresh produce. Even F&V wholesalers have taken a shine to the service as it reduces wastage and improves their profitability. If the scale is large enough, Rivigo can set up pre-cooling facilities in rural locations, aggregate, sort, grade, package and transport the produce for large farmers or farmers’ collectives.

It is a long journey, says Garg. ‘We are turtles not rabbits.’ He reckons it will take a decade or two for Rivigo to be a significant shaper of logistics. Founded in 2014 as TruckFirst, Rivigo has 1,500 vehicles which ply on 170 routes through 40 hubs. It has placed an order for 700 more. The company has received $40 million in funding, mainly from SAIF Partners.