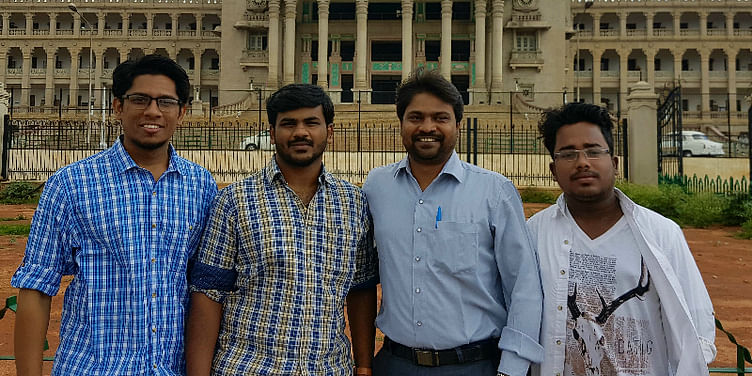 History has shown us many successful companies that have had their origins in colleges. In most cases, college students or recent graduates have co-founded companies with their peers or have gone ahead to start companies solo. It is slightly rarer though, to see a college professor and student teaming up to start a company. Bengaluru-headquartered Royal Brothers, a self-ride bike rental platform, is one such startup, which recently completed one year of operations and has an interesting story.

Co-founded by the professor-student duo of Manjunath T N and Abhishek C Shekar in July 2015, Royal Brothers claims to be South India’s first RTO authorised self-ride bike rental platform. Based on their personal experience, both founders were aware of the difficulties involved in getting access to good quality rental bikes. They even got feedback from Ramesh Babu, the famous barber who owns a Rolls-Royce, and was the first to get an RTO permit for four wheeler rental vehicles in Benagluru.

So in April 2015, Manjunath and Abhishek saw an opportunity and decided to start a self-ride bike rental platform that took care of the entire value chain instead of the more popular aggregator solutions which were already prevalent in the market.

Manjunath, CEO of Royal Brothers, obtained a Mechanical Engineering degree from Visvesvaraya Technological University (VTU), Belgaum in 2006 and went on to pursue his masters in Machine Design from the same university. He then taught at different engineering institutions in Bengaluru for over eight years and met Abhishek during his time at RV College of Engineering. Manjunath has a keen interest in improving transport services in grey areas which are yet to be tapped in the Indian market.

Abhishek, COO of Royal Brothers, is also a mechanical engineer and graduated from RV College in 2015. Royal Brothers is his second attempt at starting up. During his third year of engineering, he had co-founded Awed By Creativity, a card designing startup, with one of his batchmates.

Before starting up officially, Manjunath and Abhishek had an intense discussion, which set the tone for their one-year-long startup journey. Being the more experienced of the two, Manjunath warned Abhishek that the journey would not be easy and that if they decided to take it up, there was no looking back. Reflecting on that conversation now, Abhishek notes,

Because of the fast pace at which startups run, we do have arguments and even now there are miscommunications and disagreements from time to time, but we understand each other well and know that our decisions are always for the good of the company. Over the last year, he has become a father-like figure for me.

Royal Brothers currently consists of a five member team, which includes Sharique Samsudheen, who heads marketing and sales, and Nikhil Raj and Akash Suresh, who lead on technology. Over the past year, Royal Brother has served about 7,000 customers and crossed about 1.3 million kilometres through their fleet of vehicles, which now consists of 250.

Currently available in six cities- Bengaluru, Manipal, Udupi, Mangalore, Mysore and Goa, users have the option of booking vehicles such as Royal Enfield, Suzuki Access and Honda Activa bikes on an hourly or daily basis. Royal Brothers facilitates booking online through their website and also at select offline centres. At their current pace, Royal Brothers claims to be seeing about 1,300 bookings a month, with an average ticket size of Rs 900.

Based on their experience in the sector, Abhishek and Manjunath believe that the optimal condition of vehicles is critical for success, and hence an aggregator model has lower chances of delighting customers. Abhishek said,

At Royal Brothers, we own all the vehicles in our fleet and ensure that they are in optimal condition before and after every ride. Having end-to-end control of this process is critical.

While Bengaluru is their most active market, Abhishek noted that the Mangalore-Udupi-Manipal stretch also accounts for a significant portion of their bookings. Abhishek’s initial plan was to just focus on Bengaluru and capture the market, before venturing to other cities. But Manjunath realised that there was a lot of demand in some cities and it would make a lot of sense to expand through a franchisee model quickly. Looking back now, Abhishek believes that this was a great move for the company as they could experiment in multiple cities, which each have different riding patterns.

As a bootstrapped startup, Royal Brothers has so far relied on word of mouth, social media marketing, search engine optimisation (SEO) and customer referrals to reach out to their target audience. While most of their regular customers belong to the youth population, looking to hire a bike for a weekend getaway, Abhishek found that a significant portion of bookings were also coming from senior folks going on business trips. The biggest challenge for Royal Brothers has been battling the general perception and pre-conceived notion that rental vehicles are mostly second hand bikes that are not well maintained.

While they have a straightforward revenue model based on bookings, Royal Brothers is also exploring a semi-franchise model, where a new outlet is set up and the vehicles are owned partly by Royal Brothers and partly by the franchise owner. Royal Brothers will still take responsibility for the servicing and maintenance of vehicles.

As we move to a ‘sharing economy’, where a majority of the population is relying on cab aggregators such as Ola and Uber to commute to work, more people are now opting out of purchasing their own vehicles. Consumers always have the option to rent vehicles for outstation trips. Zoomcar is the most prominent player in the car rental space and had recently raised a $25 million series C round, led by Ford Motor Company. Coming to two wheelers, there are players like Broadbean Capital-backed Wheelstreet, Wickedride, SelfDrive.in, Rentongo and Dryve.

Royal Brothers aims to capture the South Indian market first and then expand nationally in 2017. To fuel their expansion plans, the startup is currently in talks with multiple investors to raise a pre-Series A round. While the startup isn't profitable yet, the founders claim to have broken-even and doing well financially.