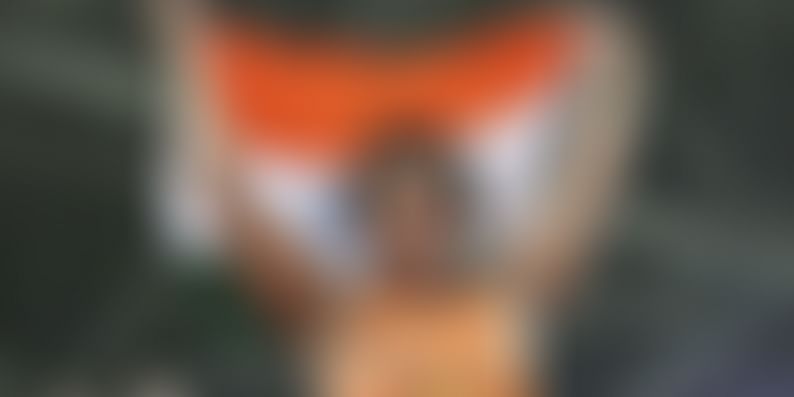 Sakshi fought five bruising battles in the 58kg category against equally determined opponents in a single day before securing the podium place. She had lost her quarterfinal bout but got a fresh lease of life when her Russian opponent reached the final, allowing the Indian to compete in the repechage round. The 23-year-old grappler from Rohtak in Haryana climbed the medal rostrum with a spectacular come-from-behind 8-5 win over Aisuluu Tynybekova of Kyrgyzstan after trailing 0-5 in the first period.

She jumped on the mat with an ear-to-ear smile before being hoisted in the air by her coach Kuldeep Singh with the Indian tricolour draped around her. It was the fifth bronze in wrestling for India in its long Olympic history stretching back to the 1952 Helsinki Games when Kashaba Jadhav became its first individual medallist. She is also the fourth female Olympic medallist from India, joining the ranks of weightlifter Karnam Malleshwari (2000, Sydney), boxer MC Mary Kom (2012, London) and shuttler Saina Nehwal (2012, London).Sakshi also became the first female grappler from India to climb the podium in the quadrennial sports spectacle – the other four medals being won by men, with two of those claimed by Sushil Kumar in Beijing 2008 and London 2012. Sakshi, with tears of joy in her eyes said,

Meri 12 saal ki tapasya rang layi (It’s the fruit of my persistent hard work for the last 12 years). Geeta didi, my senior had qualified for the first time in London. I never thought I would become the first woman wrestler from India to bag an Olympic medal. I hope the remaining wrestlers will also do well.

She said she was confident of winning a medal and she kept on trying till the last.

I knew till the last that there was a medal in the offering, I kept on trying. I was very confident, and this medal is a result of my struggle all these years. I never gave up till the last, I knew I would win if I lasted six minutes. In the last round, I had to give my maximum, I had the self belief, she said.

Her bronze medal winning feat was like a balm as it came after Vinesh Phogat was forced out of the 48kg competition due to an unfortunate knee injury suffered during her quarterfinal bout against Chinese rival Sun Yanan. Vinesh had to be stretchered off the arena. The MRI scan confirmed a knee ligament tear. The injury occurred when the Chinese was leading 1-0. In another disappointment, woman half miler Tintu Luka ran a poorly judged 800m race and exited the fray after finishing sixth in her first round heat in 2:00.58, which gave her the overall 29th place out of 65 participants.

A protege of track legend P T Usha, she holds the national record of 1:59.17, which she created in 2010. As usual, she led the field till around the 600 metre mark, before fading on the final stretch to end her second Olympics campaign in disappointment.

India’s teen golfer Aditi Ashok fired a flawless three-under 68 to lie tied seventh after the opening round of the women’s golf competition. The 18-year-old from Bengaluru, who won the qualifying finals to earn a full card on the Ladies European Tour (LET), picked up three birdies at the 2nd, 10th and 14th holes and parred the rest to stay three strokes adrift of the leader. Aditi had represented India at the Asian Youth Games in 2013, Youth Olympic Games in 2014 and Asian Games in 2014.

All these came before Sakshi brought enormous cheer with the day’s proceedings coming to an end. She stormed into the bronze medal play-off with a dominating 12-3 victory in her 58kg repechage bout. Sakshi gave no chance to Purevdorjiin Orkhon of Mongolia as she bagged as many as 10 points in the second period after the scores were tied 2-2 at the break. She got a shot to fight for the bronze medal despite losing in the quarterfinals as the wrestler who had beaten her in the last eight round, Valeriia Koblova, reached the final.

Also read : 10 Indians to watch out for in India’s 100 at Rio Olympics

As Sakshi had reached the quarterfinals in this category, she had to fight only one repechage round as compared to two for the other opponents of the Russian, whom she had beaten in the earlier two rounds. Koblova had beaten Luisa Niemesch of Germany in the qualification round before defeating Mongolia s Orkhon in the pre-quarterfinals. Sakshi had to get the better of the Mongolian in the repechage round 2 and she did just that to advance to the bronze medal play off. Earlier, Sakshi went down in the quarterfinals after losing 2-9 to Koblova.

In the first two rounds, Sakshi came back from behind to register impressive wins. Making a strong comeback from 0-4 down, Sakshi defeated Sweden’s Malin Johanna Mattsson 5-4 in the qualification round with just 10 seconds remaining. In the pre-quarters, she once again eked out a narrow 5-5 win over Mariana Cherdivara Esanu of the Republic of Moldova by virtue of a double take-down as compared to her opponent’s one. The Indian was declared winner on bigger points gain.