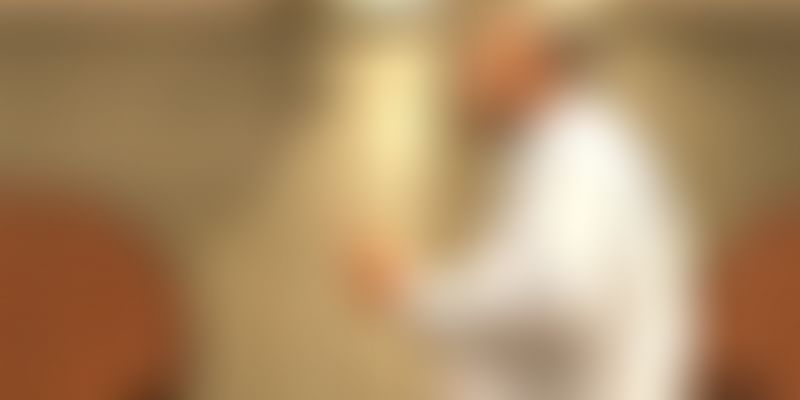 “How many of you daydream?” Sanjeev Bikhchandani looked quizzically around the room filled with students and faculty members. He surveyed the sea of faces and noted only seven or eight raised hands. He loved to daydream, he said: when he was 10, he dreamt of a world of arc lights, the world of Rajesh Khanna; at 11, he envisioned a fast-paced cricketing career like that of Sunil Gavaskar; at 12, he aspired to be an entrepreneur.

On finishing school, Sanjeev was sure of his pursuit. He joined Horlicks after graduating from college. He survived through it all: bureaucratic systems, top-down decision making, and intense competition. Once called upon to test a design change on short notice, Sanjeev braved a hot, dusty journey in an overnight bus from Chennai to Madurai. “It was November 1989, I didn’t know a word of Tamil and I’d have been murdered if I’d spoken Hindi,” he recalled vividly. “They said, ‘Go back and reduce the price! Did you come all the way from Delhi to ask us such stupid questions?’” 20 such conversations was the threshold for Sanjeev, who realised the futility of the sales function. He decided that the rat race wasn’t for him: “I just didn’t want this life.”

“We were all a bunch of misfits,” Sanjeev described his batch of PGP 1989 at IIM Ahmedabad, which had a staggering 50 percent foraying into entrepreneurship. Their generation was not one that was brought up to change the world through entrepreneurship. Their duty was to study hard – the only “salvation”, as Sanjeev described it. He must have been of a different bent of mind, for one of his batch mates, Prof. Arvind Sahay, reminisced about how Sanjeev always knew that he wanted to create something. “What makes him an entrepreneur is his sense of curiosity.” He highlighted Sanjeev’s knack for observing customer needs upfront. As a result, his company was not built on technology but on solid customer insight.

Sanjeev echoed this thought as he typed out on a blank slide:

He attributed his first project idea to his experience with the Placement Committee at IIMA. Acting as a concierge, he escorted company representatives from dorm to dorm, brought them tea and coffee, and took them out for lunch. He noted an interesting phenomenon: competing companies would latch on to a candidate with an offer and a caveat that they would drop the offer if the candidate did not accept it immediately. “This was my first product idea. If companies can come to blows over recruiting bright talent, and if someone were to do a salary survey of what companies are offering fresh MBAs, that report would sell like hot cakes,” Sanjeev explained.

He suggested that entrepreneurs base their idea on a customer insight, so their likelihood of success is very high. “Solving an unsolved problem increases the chances that you’ll get a hot product. If you hit a hot market, people will want to buy your products and you won’t have to sell – that’s a great position to be in.”

Ideating on how to solve an unsolved problem is all fine, but how do you drive yourself to actually do it? How do you take the plunge when your friends are landing corporate jobs and earning twice, maybe even thrice as much as you are? Where does the motivation come from? Of course, as Sanjeev described, one factor is that an entrepreneur does not follow the rat race but creates his own track. “I was really afraid for the first two years. It took courage to leave my job. I was attached to my pay check. I was still afraid for two years after leaving – it took me those two years to get used to living off my wife’s salary!” He narrated how he stopped meeting his friends for those two years as he could not foot his share of the bill at the five-star hotels they would frequent.

Financial constraints remain a major part of any entrepreneur’s life – Sanjeev was no stranger to this fact. Eventually, he took multiple jobs to increase income once his wife quit her job in 1995. Be it newspaper journalism or teaching at primary schools, Sanjeev put himself through the grind to realise his dream. “You don’t necessarily feel the pain once you’re making the sacrifice, but in the long-term, it has an impact.” He may not have been able to afford to live in a better part of town, or send his kids to the kind of schools that his wife wanted to. “But that’s a choice we made,” he asserted.

There is no doubt, however, that personal sacrifices are an occupational hazard: “If you dream of a work-life balance, don’t start a startup,” Sanjeev quipped, “It’s a 24/7 job, you have to obsess over it.” His theory is that most successful startups are not started by 50-year-olds precisely because startups are extremely demanding. According to him, the biggest and best companies in the world are founded by people in their early 20s.

At the same time, he pushed aside all notions of the “glamour” behind entrepreneurship and called attention to his key lesson: keep expenses low.

“The truth is that, at the early stage of a startup, most spreadsheets you look at are fiction,” Sanjeev explained. “It’s the stuff you do to justify a deficit with that size of funding.” He recounted how any money raised was kept safe and then spent judiciously. For instance, out of $1.7 million at a Rs 44 exchange rate, Sanjeev used only $1.2 million and put the rest in the bank.

How many of us think of entrepreneurs as dynamic, driven risk-takers? “A good entrepreneur is risk averse,” Sanjeev elucidated. “Be a little fearful so that you mitigate risks.” In fact, what he drew out beautifully is that entrepreneurs often take a low-risk path, and that is, in fact, the difference between successful and unsuccessful entrepreneurs: how they handle downturns.

Entrepreneurs do not need venture capital to succeed. Giants like Infosys and Reliance themselves did not start out with venture capital. In fact, there was no concept of venture capital in the 1990s, but companies were built. “You might be more successful without venture capital,” Sanjeev continued, “Your customer’s money is always better than an investor’s money. If you get your customers’ money repeatedly and make a positive margin, it means you probably have a viable business.” Take note, potential entrepreneurs: if you have a viable business, investors’ money will follow, but if you get investors’ money, it’s not guaranteed that you will get customers’ money as a result. A big believer in bootstrapping, Sanjeev emphasised how it taught him the value of money and ensured that his product looked appealing to the customer and would earn returns. To this end, he took no salaries from his own company for six whole years.

“Advertisers perpetuate the myth that brands are made by advertising, so people spend more money on them, thinking it’s an important function,” Sanjeev added. He stayed away from this herd mentality, focusing mainly on the product and customer experience in his first five to six years at Naukri. They had no advertisements, while competitors advertised freely with four times their money. “But we beat them because of our customer insights,” Sanjeev said, smiling.

A common question that came up was on the “vision” for Naukri. Sanjeev clarified that he didn’t always have a vision for Naukri. In fact, he believed that vision was often too big a word attached to entrepreneurs. “When we launched Naukri, we had no vision. We simply said that if we can get 1,000 companies a month to pay Rs 500 to this one-dollar startup, that’s 60 lakh a year. It looked like a nifty idea! Three years after launching Naukri was when I got my vision.” He’s a firm believer that vision evolves along the way but cannot be what success is attributed to. In his mind, the primary issue to be highlighted was how one sold people his/her idea.

One very important issue Sanjeev addressed that was possibly on a lot of minds in the audience was the stereotype that entrepreneurs are extroverts. “This is not true. I was an introvert. I absolutely hated speaking in public. Necessity is the mother of invention.” Describing himself as a shy student, Sanjeev detailed that he stepped out of his introversion because he had to.

One cannot have a conversation on a career path without criticising the education system that came before it. Sanjeev has a different view. He swears by his education and states unequivocally that he benefited from it. “You are taught 10,000 things and you don’t know what you will use. But the point is that you are taught to critically analyse and understand why what is happening is happening.” He also could not deny the fact that his being from IIMA opened doors for him. However, once the doors are open, it’s up to you to go somewhere. Highlighting the problem-solving approach, Sanjeev commented that a good business school, while helpful, was only one of the many factors in success.

“Understand the value of money. Spend every rupee sensibly.” Sanjeev’s biggest challenge when he started Naukri was “having no money, poor infrastructure, operating on one floor out of my father’s house with no electricity”. He assures his listeners, however, that all hope is not to be lost. “Identifying the right opportunities is 60 percent of the reason for success. If the customer doesn’t need your product, sales will be difficult, and you’ll typically not break even or be viable in the future.” Observing customers, being the customer – these are activities that will help identify unsolved problems. “You should be an innovative first mover. What you’re doing should not be copied so easily.”

Sanjeev also assured the audience that, in the beginning, most ideas were small. What was important was to dream big even while starting small. If one were to start small, the cost of failure would be low. “A small failure is not a failure, because you’ll still survive.” In a sense, that was why he considered it better to have no money on starting up. If people were to work with you then, it would be solely because they believed in the product, idea and person. “Be the kind of person people want to work with,” Sanjeev said, “You have to sell them your idea. After a few years, you’ll call it a vision.” He was met with deafening applause from the crowd, whose questions and remarks at the end of the session suggested that a significant number of them felt more confident about carving out a niche for themselves.

Check out the full video of Sanjeev's talk at IIM-A: