2 cyclists, 11 states, 70 days — how these 2 Mumbaikars are promoting girl child education by raising funds for 1,500 students 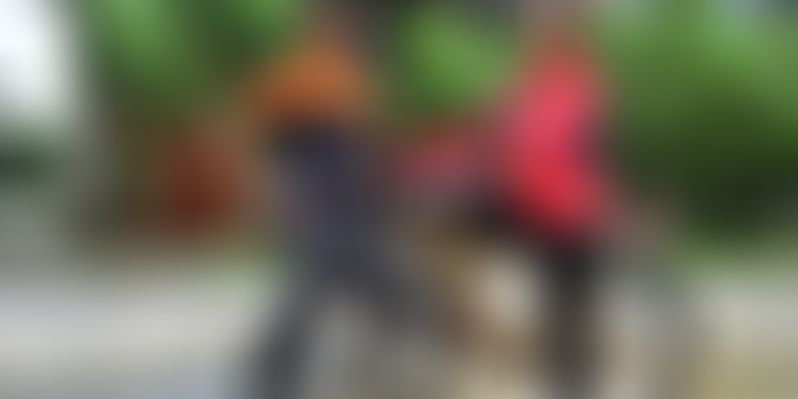 Most of us spend our days amidst concrete walls, relying on the internet to connect us with the world. With every form of social media buzzing with fresh news every second, we pledge to share and talk about the absurdities society presents us with. We whine, we crib and complain, but what after that?

While many organisations proclaim their efforts to provide education to every girl, the 2011 Indian Census challenges these claims. A report by the Ministry of Home Affairs states that only 65.46 percent of the country’s women are educated, showing a gap of 16.68 percentage points between the sexes at the national level. Although most of us expect the people in power to make the required changes, these two cycling enthusiasts from amchi Mumbai are on a mission to do their bit.

Sumeet Paringe (26) and Prisiliya Madan (22) are riding from Kanyakumari to Khardung La in the next 70 days, covering 11 Indian states. This is the first time in India that any cyclist will ride this distance on a bamboo bike. Both the riders are quite optimistic about their journey and are using a crowdfunding platform to raise the money.

Cycling their way to promoting education for the girl child

Ahead of this journey, they decided to dedicate this ride to a cause they feel strongly about. Both the riders unanimously took a stand on society’s hypocrisy when it comes to something as important as education. Considering their previous successes in spreading awareness, they took up education for the girl child as the cause for this ride.

Being a girl fortunate enough to hail from a supportive family, Prisiliya says,

While education is available to everyone across the country, we realise that there is a growing need to promote girl child education, something that has been neglected for generations

As they flagged off their journey from Kanyakumari on July 14, Sumeer Paringe shared,

Education is the key to empowering women and girls, which helps bring about social equality. When you educate a girl, you educate a family

The ride so far

The cyclists started their journey on July 14 from Kanyakumari and aim to reach Khardung La by mid September. On their journey, they will cover 11 states: Tamil Nadu, Karnataka, Telangana, Maharashtra, Madhya Pradesh, Uttar Pradesh, New Delhi, Haryana, Chandigarh, Himachal Pradesh, and Jammu and Kashmir, over a period of about 70 days and a rigorous 4,400 km.

When asked about their initial hurdles, Sumit says,

The weather conditions from Kanyakumari to Bengaluru have been harsh. The temperature during the day goes up to 45 degrees Celsius, making it a difficult and draining experience for us. Given that it is monsoon in the southern part of India, whenever it rains it also hampers visibility

But this hasn’t lowered their enthusiasm; clocking 70 km every day, they have covered over 700 km already.

To add on to the adventure, these cyclists have raised the bar by using bamboo cycles in their journey. The frames of these cycles are made entirely of bamboo, which is an excellent material for such purposes. Bamboo frames are lighter and stronger than several steel-made bicycles. Bamboo’s tensile strength can exceed that of carbon fibre, aluminium, and steel, and its compression strength can exceed that of concrete. Bamboo is much more shock absorbent than steel, so bamboo bikes make shock absorbers redundant even on bad roads.The journey has been special in many ways. From being the first ever expedition on a bamboo cycle in India to the cause that it is associated with, the team has so far sailed through every hurdle.

Managing the expenses for an ambitious trip like this has been a task but they have gracefully sailed through it by going the crowdfunding way, reaching out to more people in the process.

A crowdfunding platform broadens the funding market and allows investors to finance the project irrespective of location, whether across the country or abroad. It has proven to be a convenient way of raising funds and the cause also ensures transparency for the cause, says Prisiliya

The entire amount raised from the trip will be invested in IIMPACT, the NGO associated with the cause of educating and empowering the rural girl child between the ages of six and above. IIMPACT focuses on primary education of underprivileged girls who have never gone to school because of the prevailing village norms. Supporting the education of 1,500 girls at the minimum is the objective of this initiative.

Also read : She quit her corporate job and rode 30,000km covering 16 states to prove how India is safe for women

As inspiring as this sounds, the entire initiative is a wake-up call to each of us, gracefully pointing out how we one can raise our voices for causes by focusing on our strengths. Both Sumeet and Prisilya have set a legacy for each of us to follow and are riding to their destination with all the grit and courage to make a difference.