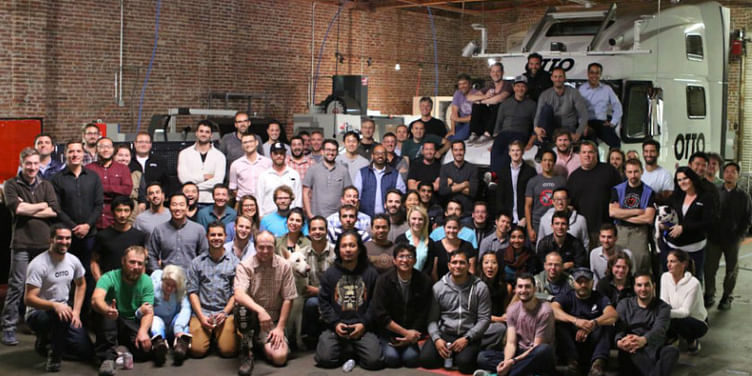 Uber has been constantly in the news for the past few months. In June 2016, it raised a massive $3.5 billion funding round led by Saudi Arabia’s sovereign wealth fund. And in July 2016, it raised eyebrows when it made a surprise decision to merge the Chinese arm of its business with rival Didi Chuxing. On the backdrop of this, Uber on Thursday announced that it had acquired Otto, a tech startup, and also partnered with Swedish automaker Volvo to make inroads in the self-driving space.

Travis Kalanick, CEO and Co-founder of Uber, took to the company blog and confirmed that Uber had acquired Otto, a 90-plus person technology startup whose mission is ‘To rethink transportation’, starting with self-driving trucks.

Under the terms of the deal, Anthony Levandowski, Otto’s Co-founder, will now lead Uber’s self-driving efforts reporting directly to Travis — across personal transportation, delivery and trucking — in San Francisco, Palo Alto and Pittsburgh.

Travis believes that in order to provide effective digital services in the physical world, Uber must build sophisticated logistics, artificial intelligence and robotics systems. When it comes to this advanced technology stack, he feels that the combination of Otto and Uber is a dream team. He said:

Anthony is one of the world’s leading autonomous engineers: his first invention, a self-driving motorcycle called Ghostrider, is now in the Smithsonian. Just as important, Anthony is a prolific entrepreneur with a real sense of urgency.

In a separate blog post, the Otto team noted that together with Uber they aim to create the future of commercial transportation:

At Otto, they believe that drivers shouldn’t have to choose between safety and earnings. Their self-driving trucks will allow drivers to rest while the truck is moving, and their platform will ensure drivers can easily find loads and are paid fairly.

Otto’s long-term goal is to create a freight network that is constantly learning and improving. The company believes that self-driving trucks together with a marketplace can create a virtuous cycle where everyone benefits.

Based on market research, Otto notes that because of the grueling work conditions, trucking companies see over 90 percent of their drivers quit every year in search of better opportunities. About one in three are involved in a serious road accident at some point in their careers, and more than two in three are at risk of a serious medical condition. So Otto and now Uber’s mission is to provide a path to sustainable commercial transportation.

Otto and Uber believe that together they can build the backbone of the rapidly-approaching self-driving freight system. They aim to make transportation as reliable as running water, everywhere for everyone, for people or packages.

In the last six years, Travis noted that smartphone technology has had a profound impact on transportation, as well as the delivery business. People have been able to rely on their smartphones to get affordable rides across towns and cities, and ridesharing also helps cut drunk driving. Travis noted,

Most important of all, the smartphone has made mass carpooling a reality. By getting more people into fewer cars, we can reduce congestion and pollution in our cities.

In the blog, Travis also confirmed that Uber and Otto have already started public trials for self-driving trucks. This is a big boost for Uber as it has beaten Google, which has long been considered a leader in self-driving technology, to start public trials. Travis said:

Self-driving trucks and cars that are already on the road thanks to Otto and Uber’s Advanced Technologies Center in Pittsburgh; the practical experience that comes from running ridesharing and delivery services in hundreds of cities; with the data and intelligence that comes from doing 1.2 billion miles on the road every month.

Uber won't get into the manufacturing business

While Google and Tesla, the two other big players in the self-driving space, develop their vehicles from scratch, Uber doesn't plan to do so. In the blog, Travis formally announced Uber's partnership with Volvo and admitted that he realised many years ago during his first visit to a manufacturing plant how incredibly hard it could be. He said:

That’s why our partnership with Swedish car maker Volvo, which we’re also announcing today, is so important. Volvo has consistently been a leader when it comes to safety. And partnership is crucial to our self-driving strategy. By combining Uber’s self-driving technology with Volvo’s state-of-the art vehicles and safety technology, we’ll get to the future faster than going it alone.

Uber-Didi merger: Ola must be bothered, but guess who is excited about the development?