These youngsters are bridging barriers between India and Pakistan through art 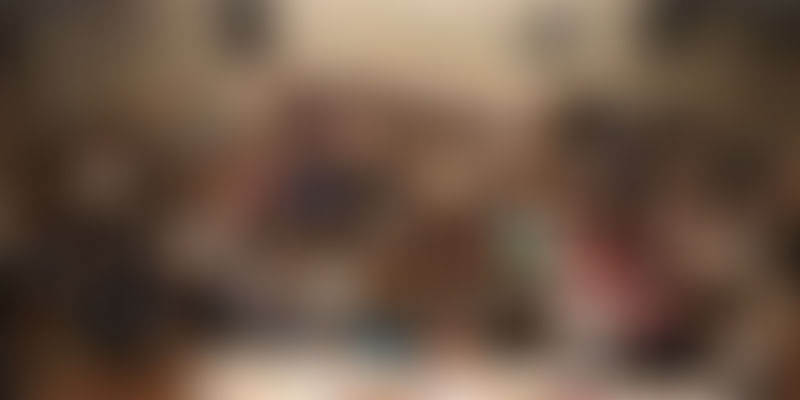 It’s a no-brainer that every adolescent in India has at some time been part of a discussion that shows our neighbouring country, Pakistan, in a bad light. However, there are certain bonds the two countries share that are hard to deny. Though one cannot overlook terrorism and border disputes, Haseem Uz Zamaan (24), a news editor from Karachi, and Bengaluru-based Open Sky Slam, are taking the bandwagon of love and unity to Pakistan with a coating of art.

Started in August 2015, Open Sky Slam has launched a cross-border initiative, Project Azaadi, which allows creative individuals from India and Pakistan to interact with each other through the medium of art, leading to the eradication of barriers between two countries.

We at Open Sky believe that every artist deserves a stage and consider this initiative an amazing opportunity to virtually exchange/share/dedicate our art to our neighbours. The vision is to build a bridge that is positive, youth-centric, and which binds each of the fellow citizens through art, ranging from poetry, storytelling, music, creative art (like drawings paintings sketches), videos and letters,” says a spokesperson from Open Sky Slam.

A 17-month-old organisation, Open Sky Slam is a community-driven venture that allows adolescents to delve deep into their world of creativity. Initially started for art enthusiasts of Bengaluru, today, the initiative has reached Mumbai, Hyderabad, Pune, Chennai, Calicut, and the Gold Coast, Australia, where it brings music, poetry, dance, and magic to a comprehensive stage.

It also conducted a project with our neighbours from Pakistan where young artists from both sides of the border exchanged ideas, hobbies, political views, and thoughts. Many of these young art enthusiasts ended up becoming friends with each other.

Open Sky Slam claims to have involved about 200 art enthusiasts last year, exchanging discussions from the Taj Mahal to biryani, from Fawad Khan to the United Nations, from sharing one’s hobbies and interests to GenX gifting the next generation a world that thrives on peace and harmony.

The second edition of Project Azaadi will roll out on a Facebook event page for two days (August 14 and 15) where art lovers are invited to participate. They can share their version of art virtually by sending their work to the Open Sky official account and the team will share it with their fellow art lovers from across the border.

The idea is to create a platform that dwells on positivity, unity, and joy, strengthening the two facets — art and youth. The initiative is a non-competitive platform appreciating every artist and has today grown into a family of about 500 people,” says Haseem. Open Sky holds monthly open mic events at all the cities they are present in and invite artists of all genres to perform for them.

Open Sky Slam believes in providing a platform to performers who are in need, be it a singer who has played for several crowds or a poet who is just starting out. Going forward, Open Sky Slam will provide a platform for all eminent artists through Project Azaadi, allowing artists meet their fellow art lovers.

Being a daughter of an Army officer, one of the founding members of Open Sky Slam has personally experienced border clashes, whether involving terrorists or Naxalites. The memory of her father preparing to head out to an area on high alert is one that still manages, simultaneously, to scare her and fill her with pride. It is only natural that this cause would be close to her heart, and she jumped at the chance to make an impact when her friend Shaun came up with the idea for Project Azaadi.

I had made some friends in India through an event about two years ago. For me, it was an amazing experience to see that our Indian friends were as interested in forming friendships and visiting Pakistan as we were to do the same with them. I think baby steps are needed to build trust and faith, which will help us propel and grow together as we should. This is why I took on this project so enthusiastically,” says Haseem, who believes art is a medium of expression and will work as a catalyst to bring both the countries closer.

They have a pool of 500 to 600 artists in India and are backed by an organisation named The Pind Collective. Moreover, the duo has also entered into a partnership with the Melton Foundation, a global forum for peace and harmony.

A Skype chat with art enthusiasts from Pakistan has also been planned, and for which they have received support from BHIVE Coworking Space, Indiranagar, and T2F, a library chain in Karachi.