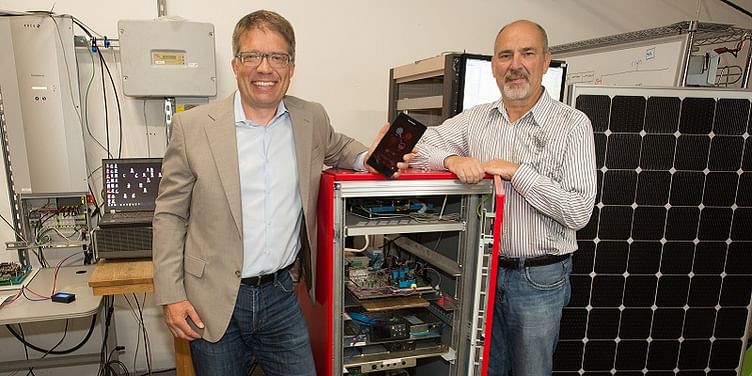 It was 2012, and Arnold Leitner had just purchased a small solar battery charger and a few rechargeable lithium-ion batteries for his family’s earthquake kit. Living in California’s Bay Area, it was a prudent thing to do.

While playing around with the kit, Arnold thought it would be great to get his freezer and refrigerator running during a power outage. And it could also be great for anyone who had electricity and power problems.

It was the beginning of the establishing of YouSolar, a Silicon Valley-based startup that provides a plug and play modular solar and battery energy system in markets with frequent power failures. The team is looking closely at India for the same.

The team believes that there is an urgent need for their solution in India and several other countries. It will not only immediately address backup power needs but will also help make solar a major power source in India.

It was during this time that Arnold thought of figuring out if it such a system could be affordable and cheap and, putting his kit down, Arnold, a PhD, says he did something that he does every time he analyses a problem: “I start with a blank spreadsheet, fire up Google, rely on my physics background and go wherever the facts lead me.”

As a former global power markets consultant, he knew a lot about utility power around the world, and also being an expert in solar resources, he understood the nuances. But he really did not know anything about the design, performance and cost of photovoltaic solar panels, inverters or lithium-ion batteries.

“Fortunately, Google knew a lot about these. My spreadsheet started to fill up with numbers and calculations. After a few intense hours, I got my first estimate of the cost of energy using solar technology with lithium-ion batteries,” says Arnold.

The number was not lower than what people pay around the world for power, but close to what it was already priced at. Arnold realised that people anyway pay more for power during an outage, with the use of a generator or a UPS.

Working out the numbers for diesel and UPS, Arnold realised that solar battery systems work out much cheaper and could potentially kill the use of diesel-powered generators or UPS.

More than just an earthquake kit

However, Arnold found that there was a problem. Electrons do not do the bidding of man. He explains:

I knew I could not scale my earthquake kit to run a whole home. Existing solar technology for a whole house just wasn’t easy enough to deploy and run when the grid was up or down. So, I took a blank piece of paper and dreamed up the perfect solar and battery system: powerful enough for a large home, plug-and-play, expandable, elegant, efficient, and easy to finance.

This was possibly a dream come true for Arnold. Having wanted to start a solar company, he went to Columbia Business School to study finance and entrepreneurship, and began building his first company.

But their space was concentrating solar power (CSP), and Arnold soon realised the race would be won by photovoltaics (PV). After he realised that he could not convince his investors to sell or pivot, he left the company and founded YouSolar two years later.

With the idea in mind, Arnold went to his PhD advisor John Price, and explained to him that he wanted a system that was plug-and-play, modular, theft-proof, and that could efficiently blend power from the panels, batteries, and grid.

“I showed some of my ideas to John and we did some brainstorming. In the end, we arrived at a DC bus architecture, which is the core of our system design today. Now, I needed to figure out how to build it,” says Arnold.

YouSolar’s initial focus is to solve backup power problems in high-end homes. The system will run the entire home, including air conditioners, and the team claims that the customer will not notice if the grid is up or down.

The system includes solar panels that can be arranged any way to suit your roof, a compact cabinet to hold the Li-ion batteries and electronics, and an Android tablet for the user interface.

It sits between the utility and the home, to isolate you from any grid problems. The software uses satellite weather forecasts and load shedding forecasts, plus it “learns” your power usage patterns.

The software also makes recommendations to shift or reduce consumption to help you use the most solar energy possible. If desired, the system can also control a small generator to charge the batteries, so that you still have coverage even during very long power cuts.

Because the battery and inverter are high power, you’ll still be able to run the entire home during power cuts, including starting your ACs. Array size goes up to 30kW, and battery storage up to 35kWh. This is a “mini-power plant”.

The standard system only takes power from the grid but does not net meter, so you don’t need any utility approval.

To achieve modularity, every solar panel and battery module has its own DC-DC micro-converter, and is connected to a 380V DC bus.

Arnold says that the energy management system ensures you get the cheapest, most reliable and cleanest mix of solar, battery, and grid power. The cost of backup power from these systems is half the cost of electricity from a diesel genset, and a quarter compared to that from a lead-acid battery-based backup system.

The team claims that they monitor and guarantee performance of every battery and solar panel for the first five years and their energy management software will predict the future power supply based on tomorrow’s weather, expected loads, and forecast power cuts.

Elaborating on the workings, Arnold says:

“We just completed our alpha system and it took about $2 million to develop it and make sure it fit the needs of our customers.”

However, companies that make hardware also need to be more creative when scaling up, because of inventory and warranty cost.

Having been through this process before with his first two startups, Arnold realised that he needed to start with borrowing what was needed from other parties. Arnold adds that there are companies who do that and they offer performance insurance or similar products.

With the product idea in mind, Arnold knew he had to build a team.

When he got the idea for YouSolar, there was a clean-tech bubble in the US, and he needed some help with components. On searching, he ended up finding a company that had electronics he could use. But when he called in, nobody was answering the phone. Eventually he got through to the founder Gene Krzywinski, who had developed DC electronics to make solar panels more efficient and easier to install.

But the venture had been hit by the exit of clean-tech money in 2011. Gene’s office was an hour’s drive from Arnold’s. When the duo spoke, Gene got interested in the idea and in how Arnold had repurposed the micro-converter he invented and found a perfect application for it. “That is how Gene became our de-facto CTO, even though he kept running his own company,” says Arnold.

He then roped in Coleman Moore, who was the VP of Electronics and Controls at Arnold’s first startup. Zyg Kunczynski was an acquaintance of Arnold’s from earlier. A graduate of Harvard Business School, Zyg had left a career in medical devices to work in renewable energy.

“After testing the waters for three months, we both decided it was a great fit and Zyg became my Chief Operating Officer,” says Arnold.

Everything that is different

A report by FICCI suggests that over $1.6 trillion has been invested in clean energy since 2004 and investments grew at a CAGR of 22 percent from 2004 to 2012. There was, however, a drop in investments in this space as the prices of solar and wind equipment fell and less capital was needed. There was also a dearth of funding in 2012.

The report also suggests that there was a shift in investment activity from developed economies to countries like Brazil, China and South Africa.

Speaking of the differentiators, Arnold says,

YouSolar is the first to integrate everything into a reliable and efficient solution with remote monitoring, analytics, sophisticated electronics, and a business model that will allow us to quickly scale globally yet maintain long-term relationships with customers.

For example, Arnold says they have no buttons anywhere, and provide control with a dedicated Android device or through the Internet. Explaining a bit more about the panels, he says:

The solar panels feature proven silicon cells with advanced front-contact metallisation to make them glass-free. They will be made in India. The inverter and all other power electronics are also lighter than conventional technology, making the system easier to ship. It is really the next generation of solar technology, which we like to call Solar 2.0.

Currently in a pre-revenue stage, the team aims to sell the complete system with a five-year full service package rather than components.

The team is currently in the process of raising funds, led by the Indian Angels and Scaale Group.

“Our near-term plan is to close our $3.5 million financing and deploy our demonstration systems in India,” says Arnold. The team intends to start commercial sales in early 2017. They intend to take this product to markets all over the world and to also adapt the technology for mobile applications, like disaster relief.

“In a few years, our system costs will be so much lower that we can compete directly with grid power. We will, of course, also add financing, so we’ll be ready for the broader market. Solar power will be a big market.”