[App Fridays] How a bootstrapped RecipeBook became a Google Editor’s pick and racked up 1.5m installs 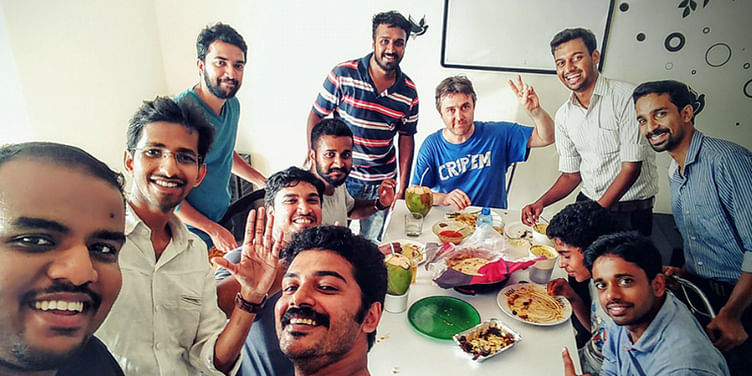 When faced with a ‘kitchen conundrum’ like this, most engineers would have been content preparing Maggi. But in 2015 at an apartment in Kochi, three young techies facing this pain point decided to reverse engineer this problem and leverage artificial intelligence (AI), image recognition capabilities and natural language processing (NLP) to simplify recipe discovery and cooking with their venture RecipeBook.

RecipeBook, as the name suggests, is a recipe discovery app that curates dishes of different cuisines and guides amateur chefs on their ‘cooking quests’. Some of the cuisines included are Indian, Mexican, Arabian, American and Indonesian.

Apart from recipe discovery, the other USPs of the app include ‘reverse search’, a feature through which users can choose individual ingredients that they have at hand in their pantries, based on which RecipeBook suggests suitable recipes. RecipeBook also provides additional details about each recipe such as calorie and nutrition count, and cooking time details, and provides users with the ability to share recipes with friends.

Shopping List (offline support)- With a few taps, users can add ingredients of recipes they wish to try out to an in-app shopping list, for easy reference.

‘Shake n make’- As described earlier, with this feature, users can select ingredients and condiments they have at hand and shake their phone to get a list of recipes based on the possible permutations and combinations of said ingredients.

‘Snap n Cook’- As the name suggests, users can pick a picture from their phone’s gallery or shoot a picture of the ingredients they have at hand and RecipeBook is able to identify them through image recognition and NLP, and suggest recipes. This integration is currently in beta and is able to identify about 600 varieties of fruits, vegetables and meat.

RecipeBook was launched in December 2015 by Anoop Balakrishnan (CEO), Nikhil Dharman (CTO) and Arun Ravi (CMO), the founders of Agrima InfoTech. The startup currently consists of a team of six across different roles.

Talking to YourStory, Anoop and Nikhil noted that their parent company Agrima InfoTech was founded in 2011 and worked in the area of AI. Some of their accomplishments include 17 patent claims for their Humanoid robot developed using AI methodologies and developing 'VIKI', a personal assistant exclusively for Blackberry, in 2013.

The idea for RecipeBook came to them in 2015, when the founders were deciding what to cook and eat based on the contents of their semi-stocked fridge. They thought of implementing image recognition and artificial intelligence into a recipe discovery platform and sought feedback from their friends.

Encouraged by the response, they developed multiple niche food discovery apps to boost their image recognition abilities and then simultaneously incorporated all their learnings into their main app RecipeBook. Anoop noted,

RecipeBook was growing well organically, but we saw exponential growth when Google recognised us and featured us under 'Editor's Choice'. So far, we have crossed 1.5 million installs.

RecipeBook is currently based out of Startup Village in Kochi, and is also incubated at Nasscom Warehouse, Kochi. The founders noted that they have a provisional patent for their technology on image recognition of food.

The food-tech sector, which was piping hot in 2015, has simmered down this year, with only a handful of startups remaining and very few follow-up funding rounds. There is, however, still a great deal of interest in recipe discovery platforms, with popular television shows like Masterchef encouraging the public to innovate in the kitchen.

Coming to competition, Japanese player Cookpad is estimated to be the most mature player in this space, having filed for an IPO in 2009 and currently seeing good growth. Closer home in India, RecipeBook competes with other interesting players like Kochi based-startup, Cookbook, and GrowX-backed BetterButter.

Bootstrapped so far, RecipeBook aims to raise a seed round of funding in the near future to further strengthen their technological capabilities and expand to more categories of food.

RecipeBook currently earns most of its revenue through in-app ads, but in the future aims to explore different online and offline channels. Anoop noted that they have currently deployed their APIs for food recognition with a few offline FMCG players in the market. Currently in the ‘proof of concept’ stage, they aim to go mainstream with this in the coming months.

To encourage more cooks to share their recipes with them, RecipeBook aims to add gamification features in the coming iterations of the app. Anoop noted,

It will include a leader board and award points, which could be redeemed offline at our partner outlets.

Their long term goal, though, is to take a leaf out of the popular game Pokemon Go and make augmented reality a central part of RecipeBook. Anoop envisions a stage where they would team up with FMCG players to create an interactive shopping experience for customers along the lines of the hit game.

In terms of content, RecipeBook does a good job of categorising different cuisines and dishes based on cooking methods and time required to cook them. The cooking instructions are included in short points, which add to the ease of use. RecipeBook claims to have over half a million original recipes submitted by cooks from around the world, but none of the recipes are actually credited to any cooks in the app, so it is best to take that claim with a pinch of salt(pun intended).

On the whole, RecipeBook is a well thought out and designed app that makes the process of recipe discovery fun and the subsequent process of cooking more organised. Features such as an in-app shopping list and ‘Shake and make’ add to its USP.