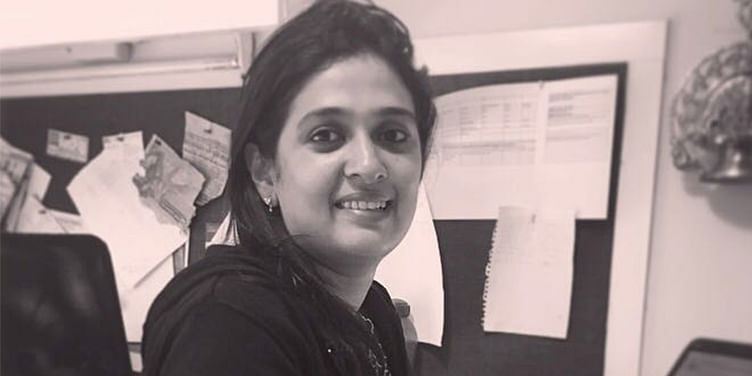 The quest to find that perfect décor for your dream home seems never ending, doesn’t it? And the presence of multiple brands is only making things more difficult. To address interior design woes - both small and big - under one roof,visual merchandiser-turned-entrepreneur Archana Ganapathy Poonacha started PinkApple – a space design, product innovation, and design service studio.

A fauji kid, Archana grew up in different cities before settling down in Bengaluru. After finishing her 12th, she went on to study at Srishti School of Design for five years. An experience which she cherishes most.

“I didn’t just learn design there, I learnt how to live life,” says 36-year-old Archana.

After graduation, Archana started interning at United Colours of Benetton and went on to work full-time for the company in Delhi where she was responsible for visual merchandising. This stint helped her gain international exposure as it required her to visit the design hubs of the company situated in Hong Kong and Italy, respectively. She then went on to work with another apparel major Levis where she handled the brand’s Red Tap category.

“Around that time, Levi’s was making it’s first shift from small format stores to larger ones. As I was a part of the visual merchandising team, I realised how difficult it was to get individual elements to decorate store windows.”

Although Archana had stumbled upon an idea, she was not very sure about it. Two years later, Archana had changed jobs and was working with Wrangler when she realised that she wanted to do more than designing stores and windows and took the leap.

I started with an initial corpus of Rs 25,000, which was my husband’s PF as he was in between jobs at the time,

Archana started by designing quilts. She put her knowledge of textiles to good use and roped in a tailor and printer who could bring her ideas to life. She then started retailing them out of a popular resort in Goa and boutique restaurant in Bengaluru. But things didn’t work out too well.

“Those places were pricing the quilts at 3X the amount they got them for me. Hence, most pieces came back unsold.”

Meanwhile, Archana had already roped in two freelance designers. She had also struck a deal with Puravankara Builders for doing up their model apartments. Her team of six had also moved into a 180sqft space in Bengaluru. Although Purvankara had their set requirements, Archana and her team went an extra mile and did more than what was expected. As a result, PinkApple bagged a bigger deal and things were starting to look up.

Although Pink Apple was in a stage where it could launch their own store, Archana had other plans. Instead of Bengaluru, she chose Coorg to open a 500sqft store.

I wanted to avoid all the obvious competition that there was. Coorg proved to be the perfect choice as from the moment we set shop orders started pouring in. At first, we had big clients like the Golf Club and Taj Group who were looking for customised furnishings. Gradually, our clientele also included tourists from all over the world who were visiting Coorg.

After gaining this initial momentum, PinkApple became a private limited company in December 2012. They moved to a 1400sqft space in a prime location in Bengaluru. The team had grown to 18 members and the company was working with clients in the residential, hospitality and corporate space. PinkApple was growing rapidly and generated a revenue of Rs Rs 45 lakhs in 2009. Although the revenue was growing at a steady pace, people coming to the store had considerably reduced. That’s when Archana decided to launch PinkApple online and the website went live in 2015.

“This was a conscious move to amp up our B2C sales.”

Although PinkApple had many illustrious clients in its portfolio and 70 percent of the revenue came from there, working with some of them had not been easy.

“There were no advance payments, they didn’t adhere to terms, installations happened all through the night and the funds were not released.”

They wanted to continue working with them, but there had to be some backup. Archana learnt of a Prime Minister’s funds for SMECC, a collateral free loan which can be availed based on turnover and three years return and got Rs 50 lakhs OD facility with bank guarantee.

While overcoming the various challenges that come with running a business, Archana has also consciously made an effort to do her bit to empower the artisan community. PinkApple tied up with IISc to train the Ramanagaram Muslim community in new embroidery techniques. The company now works extensively with them and plans to set up more such centres. Archana was also keen on helping women re-join the workforce after long career breaks owing to motherhood. Being a mother of two young kids, she understood the travails of managing both home and family together.

Although these women are qualified and experienced, they are goffered entry level jobs after long career breaks in most organisations. PinkApple has always had its doors women for such women to resume their careers from where they had left, we make them feel like they are supposed to, valued and respected.

Home design industry is worth $25 billion in India now, and is expected to grow to $35 billion in three years. Within the next two years, four to five percent of this market is poised to move online. So how does Pinkpple deal with all the fierce competition in the space?

“Our backend integration is very strong and our delivery is prompt. While most players in the space are now focussing on B2B, we have an edge as we have a considerable number of both B2B and B2C clients.”

PinkApple is currently looking for funding to amplify marketing, upgrade software and improve backend integration. But it is more than just love for what she does and business acumen which keeps her going.

My father used to always tell me that if I persevere, work hard and be patient, money will follow. It did. And as I continue to grow along with PinkApple, I want to share something that I learnt through my own experiences; Ego is a big issue today, put that aside and work. Be humble!