Mobile architect, Arun Babu on his journey across Samsung, Yahoo! and DailyHunt 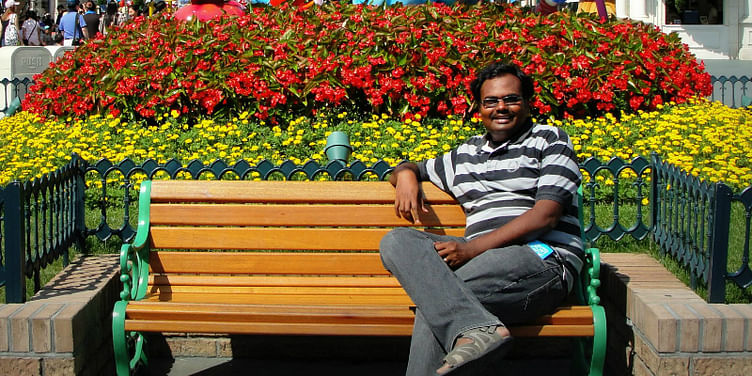 It was a typical evening in Bengaluru and I was just about to get into a meeting with the Android architect of one of India’s leading regional content aggregators—DailyHunt—that clocks an estimated four billion page views a month.

I had spent the last few hours trying out DailyHunt’s app, reading up about the company’s latest updates and about Arun Babu A S P, who has had an interesting career across multiple companies like Samsung and Yahoo before finally joining DailyHunt, in his most recent role.

I had a lot of questions in mind and based on Arun’s credentials and experience, expected it to be an extremely serious and formal meeting. But as soon as the meeting began I was taken by surprise by Arun’s warmth and humour and the next hour flashed by quickly. Here is an overview of the conversation.

Like almost all students’ in Indian households, Arun decided to take up engineering after completing school as he was interested in electronics and communications. After a little research and sorting through different prospects, he found a good college- Arulmigu Kalasalingam College of Engineering, Krishnankoil (affiliated to Anna University, Chennai), near his hometown in Sivakasi, Tamil Nadu.

In school Arun had always liked Maths and Physics and now at University found Electronics interesting. But he found a bigger appeal in communication-related subjects. Arun didn’t like rote learning though. He joked,

I was always happy if I could scribble numbers and close my answer sheets, rather than pages of theory.

Aricent, a global design and engineering company, had a collaboration with Arun’s college and had setup a network security lab there. They also came in for campus recruitment and Arun had an offer from them to start his professional career.

In 2006, there was no Android or iOS. Mobile app development was not even known to most companies then.

Arun then got an opportunity through Aricent to move to Gurgaon and work on a base station software for Nokia. Arun noted, “One of the advantages was working with a real-time operating system.” But after 18 months Arun didn’t find it as exciting and found his next callings at Samsung and Yahoo!

After a few months, Samsung’s Android team was facing a resource crunch. They wanted someone with multimedia background and Arun fit the role. So he got opportunity to move to Android. In 2010, Android had recently become mainstream and was among most popular operating systems in the world powering millions of Samsung devices. Though Arun had dabbled with Android casually over weekends, he didn’t have real professional experience in the sector. But he decided to take the challenge.

So for the next three years, he contributed to the team and also learnt a great deal about Android development and multimedia applications. One of his most important learnings at Samsung was to make zero assumptions when dealing with complex systems.

One of their toughest challenges was to apply and learn pure engineering to video-audio sync in multimedia components in Samsung. Arun said, “Your device provides some functionalities, and your hardware behaves in certain ways. You can make zero assumptions in these cases. You have to learn what each component does and behaves. Your code may be good, but finally it boils down to hardware- which has its own latency- for which you have to plan.”

The opportunity was in Mobile Ad SDK team. It was different from core multimedia, but I was interested to try it

Arun found his time at Yahoo to be a great learning experience. He said, “The senior folks at Yahoo were always around and very helpful. They would help you make a transition from a developer to an engineer. That helped.”

In 2014, Yahoo was facing a few challenges and Arun came to know about the then young and upcoming startup NewsHunt(now DailyHunt) was looking to hire. Though he didn’t have much information to make an informed decision, he decided to go with his gut instinct and joined NewsHunt.

Recalling their early days, Arun noted that they were a small team occupying an office behind Koramangala’s BDA complex. He said,

When I joined, the Android team was in one cubicle, Windows and iOS teams in next cubicle and backend team in another, with the CTO seated in the centre. We used to review protocols over cubicle walls!

At that stage NewsHunt was doing well and had cracked their offering for the vernacular domain. The focus then was on serving a larger audience and the team realised that they would need to make tweaks to their technology and market positioning to go after it.

Scaling and rebranding to DailyHunt

In February 2015, NewHunt announced that it had raised a Rs 250-cr Series-C round to scale up their vernacular platform. Soon after, they announced their new market positioning as DailyHunt, to expand to more categories beyond news. Recalling the developments, Arun said,

This was a big call, but was taken quickly at the right time. When we rebranded, the tech team also got the opportunity to change architecture, review the tools used and go for something fresh, which has helped scale for exponential growth in multiple quarters.

Arun noted that DailyHunt’s tech infrastructure at that time was ‘legacy’ and hence they decided to rebuild it to scale and also add personalisation tools. To reach mass market, DailyHunt knew that their technology would need to adapt to different devices and network speeds. Arun elaborated, “Some high-end users would have devices of the highest configuration with 6GB RAM and 2Ghz processors. On the other hand there were phones with 512MB RAM and much slower processors.”

So the challenge was to provide a uniform experience regardless of device capabilities and also learn user preferences and patterns, without slowing down the app. So over the last two years, DailyHunt has been able to tweak its offering and has now scaled up to about 27 million monthly active users, which comes down to five million daily active users(DAU) who account for four billion daily page views. DailyHunt’s growth has mainly been across Tier II cities and rural areas on the Android platform.

Achieving success and retention at large scale requires hard work, commitment and technical prowess. Arun shared some of DailyHunt’s secret sauce during the meeting and dived deeper at a recent talk at AppFest, where I was part of the audience. Arun noted,“There are many paid methods to scale your apps and get traction and downloads. But the best options are free and technical.”

2. Measure user navigation at all check points and apply corrections where you see major drop-offs in userbase.

3. Don’t request login too early- Asking for login, user profile info, on signup might scare away users. Ask for them only after the first successful transaction.

5. Secret sauce- Localise your app in your target user's language and currency. This can help building loyal user base.

Regarding the last point, Arun added that he had been advocating the advantages of localising an application to target user’s languages as he believes that localisation will be the most important part of the secret sauce in achieving best user experience and creating an emotional connect with users.

Giving back to the community

While his employers have played a big role in helping him pick up relevant skills and gain knowledge, Arun notes that he also learnt a lot by giving back to the community through different initiatives that he is a part of. Some of these include BlrDroid - Bangalore Android Developers Group and UpGrad Android Program, where he is a mentor. He said,

From the time I have been associated with them, my awareness about Android, best practices has improved, making me a much better developer and product architect

Talking about the now popular debate of whether chatbots will replace mobile apps, Arun noted that all apps can be categorised into three categories based on consumption patterns- daily, semi-regular and one-time.

Apps that fall under daily usage include social networks, chatting and news apps. Semi-regular could include travel booking and e-commerce, which are fired up once a week or once a month. While the third category includes apps that provide one-time utility solutions like contact info importing. Arun said, "Only the second category has to worry about chatbot platforms as a user might not see value in keeping your app installed, if they have low space."

On how app developer can fight the uprising of chatbots, Arun reiterated his earlier thoughts and noted,

Check whether the app is delivering the best performance in the 'funnel'. Then- measure, refine and repeat.