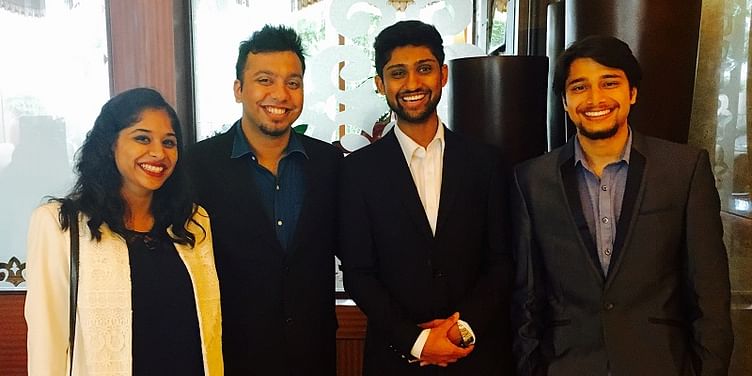 Three years ago, Zeeshan and a group of his second-year batchmates from SRM University were sitting and having their usual hostel room conversations. Apart from fluid mechanics, which was the study topic for the evening, everything ranging from politics, economics, astrophysics, and startups to even Sunny Leone was covered in their conversations.

But the needle stuck on one topic — their real passions. While one wanted to become a writer, the other wanted to be an economist, but what they were really doing was sitting in a hostel room, studying a topic they had no interest in and pursuing a course they had never felt connected to.

This situation wasn’t unique to them; millions of other students who are forced into conventional courses due to uninformed career choices experience the same thing. This hit Zeeshan Mohammed (22) really hard and he decided to launch a youth organisation which would help teens make informed career choices.

Of learning and pivots

Initially known as Inking Pages, the venture was first an editorial magazine, with the founders conducting events for schools. Joining the magazine were other co-founders — Sameer Ramesh (21), Fatema Hussain (22), and Ruhan Naqash (22) joined the business.

However, understanding the challenges to scale, the firm pivoted the model into a full-fledged mentoring platform called MyCaptain.in by April of 2015.

The founders were always focused on moving beyond the conventional way of writing exams, mugging up topics, and getting placed through college recruitments.

Today, Zeeshan defines Climber as a youth-run education startup, currently incubated out of NSRCEL at IIM Bangalore. Through their curated events and youth programmes, the startup aims at mentoring young students to make informed career decisions.

Zeeshan tells us that their main product in the market is their mentoring platform MyCaptain.in, where students take part in mentoring workshops around a specialised topic of interest. The month-long workshops, starting from the 15th of every month, are structured to give insights to these young students in terms of knowledge and career.

According to the founders, there are a minimum of 20 people in every batch with mentors less than 25 years of age. Explaining the reason for the same, Zeeshan tells us,

The reason mentors are so young is that we want the mentees to connect with them. We would like a person who has gone through the challenges recently, rather than having gone through circumstances 10-15 years ago, which might even be irrelevant today.

In return, the mentors’ projects get funded. As much as 20–33 percent of the amount paid by each mentee is paid to the mentors for the guidance provided.

The firm claims to have 220–240 people signing up for these courses every month. Till now, a total of over 1,800 mentees and more than 25 captains have conducted mentorship sessions across 14 fields of varying interests. This has doubled from an average of 80 enrolments per month since last year. Moreover, these sessions are held completely online, with users logging on to either the MyCaptain website or the web application.

However, to make learning more refined and target more individuals, Climber is aiming to add broad subject-oriented courses rather than specialisations. Zeeshan explains the same,

We are going a layer below by adding subject-oriented mentorship rather than just sticking to specialisation-oriented sessions. This means that if there is a session on mechanics or robotics, we want to add a course for engineering below it. This helps the child understand whether he is interesting in engineering as a subject in the first place.

The second business model for the startup is their events, which are held in various cities. Although working only as marketing initiatives, the firm has been successful in making profits from these events.

Under the brand name Indian Youth Conclave (IYC), the Climber gets YouTubers, artists, TEDx speakers, entrepreneurs, technologists, and musicians from across India to interact with teenagers in a particular city. The team has successfully conducted IYC in Chennai and Nagpur, while looking to hold the event in Delhi and Bengaluru next. According to the company, the event has a footfall ranging between 800 and1,000 teenagers from various schools and colleges across cities.

The firm also organises events like ‘Lit Up’ in the domain of literature and an annual entrepreneurship summit called Kickstart.

The addressable market for the startup is teenagers from the age of 14 to 22.

Climbing up and steady

Witnessing revenues of Rs 16 lakh last fiscal year, the firm is looking to earn Rs 50 lakh in revenues this fiscal year. In college alone, the team was making more than Rs 1.5 lakh on a monthly basis. At present, the team is focused on developing their tech platform while releasing app versions on Android and iOS.

The aim is to reach Rs 1.5 crore in revenues by the end of fiscal year 2017–18. Close to 40 percent of the firm’s revenues still come from events, and the firm has already made roughly Rs 18 lakh in the last five months this way.

Zeeshan says that this ratio will fall as they evolve and develop their tech platform MyCaptain.in in the next few months.

In the next seven months, the firm strives to achieve 20 percent month-on-month growth while scaling to a volume of more than 1,000 mentees.

On the technology front, the firm is also looking to integrate machine learning to understand user behaviour. This will further help users who are clueless about what session to take to narrow down on a decision.

It has been an amazing experience so far having started up in college, faced bankruptcy and debt, getting out of it and bootstrapping to a revenue of over Rs 30 lakh over the last 18 months, having seen a change of team, and finally getting incubated by NSRCEL.

The firm claims to be profitable as of now.

Vedantu, Simplilearn, Toppr, Iprof, Meritnation and Talentedge are some of the well-known names in the industry.

Climber seems to be in certain aspects be closer to certification preparation portal Simplilearn in terms of mentorship. However, Simplilearn seems to have an evolved model of specialisations for career growth rather than career counselling.