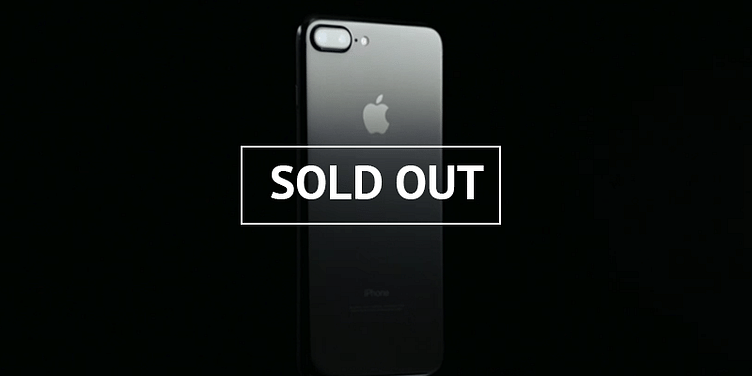 All the excited customers queuing up outside the official stores for their goodies have a long wait coming, although they are given the option of ordering them online. However, there too exists a backlog, specifically in the UK and the USA, where both the iPhone 7 models are showing a wait-period of a good two to three weeks. Also, those who wish to purchase the new jet black variant of the iPhone 7, which according to the website has undergone a “precision, nine-step anodisation and polishing process”, have an even longer wait of five whole weeks.

So why is the new model selling like hot-cakes? Going by the revelations during its official launch, the iPhone 7 has several accelerated features, such as a dual-camera setting, removal of the 3.5mm headphone jack and its replacement by airpods, a higher base storage capacity, a new home button and a better A10 processor, among many others.

It is also the thrill of the exclusive that is raising its demand through the international market, which works out great for the billion-dollar conglomerate, as rising demand equals greater sales. According to CNN, the company’s stock has risen up by nearly 8 percent this week after surging more than 4 percent last Wednesday. Sprint said that the initial iPhone 7 and iPhone 7 Plus pre-sales were up by 375 percent, as compared to last year's iPhone 6s and iPhone 6s Plus launch numbers.

“We sincerely appreciate our customers' patience as we work hard to get the new iPhone into the hands of everyone who wants one as quickly as possible,” said Trudy Muller, Apple spokeswoman, in an official statement.

Strangely, Apple usually reveals the volumes of new iPhones that it sells over the first pre-order weekend. However, this time they are breaking tradition by not reporting the numbers, instead defending their stance by saying that the figure is more a reflection of supply than demand. According to Reuters, this announcement has alarmed the who’s who of Wall Street, who are beginning to fear that the sales of the iconic iPhones may not be keeping to its usual mark of sales and profits.

However, US-based wireless carriers Sprint Corp (S.N) and T-Mobile US Inc. (TMUS.O) confirmed earlier this week that they have received a large quantity of pre-orders for the iPhone 7 that is sure to set its sales and consequently Apple shares off the roof.

Although there has been much talk about how the iPhone 7 isn’t very different from its predecessors and does not offer good value for money, its limited quantity in the stores speaks otherwise. According to some analysts, the thrill of the ‘exclusivity’ of owning a model with newly released finishes before it becomes mainstream is what is lapping up the demand for this particular series.

The demand for the ‘Lucky 7’, as it being referred to, has pushed Apple’s stocks up to the highest numbers it’s been all year, marking the company’s worth at over a whopping $600 billion dollars. As the world waits impatiently to possess the most sought after product of the year, most holding on to months’ worth of carefully planned savings, one can truly understand the loyalty that the brand is proud to cultivate among its million-odd global users.