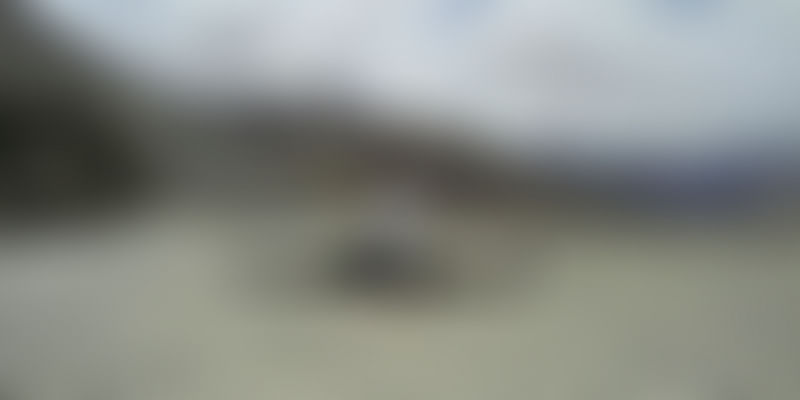 It is said that when you really want to do something, the whole universe conspires in helping you achieve it. This might seem like a far-fetched cliché to many, but talk to those who have actually experienced it and they will tell you why it doesn’t hurt to BELIEVE. Neetu Singh, 36, flight attendant-turned-model-turned-yoga entrepreneur did just that — believed in her dreams — and this is her story.

A fauji kid, Neetu grew up all over the country and became a part of Sahara Airlines’ cabin crew after graduation. It was only a few months into the job, at a star studded party, that she stumbled upon her true calling — yoga — in the most unusual manner!

I was awestruck after seeing celebrity yoga guru Bharat Thakur do things I never thought were humanly possible. As soon as he got off stage, I ran to him, looking visibly amazed, to congratulate him and he told me I could do it too, but for that, I would have to quit everything I had been doing.

Neetu laughed it off at first, but Bharat’s words continued to ring in her ears and one week later, she decided to quit her job to start training under him.

The leap of faith

That was the turning point of my life.

Although Neetu knew what she was doing and was excited about beginning her new journey, people around her were not as impressed. They could not come to terms with her sudden decision and were not initially supportive.

I remember my parents even stopped talking to me for over a year and my friends just couldn’t understand what I had chosen to do with my life.

Undeterred, Neetu started training wholeheartedly and gave it everything she had. Her everyday training included five hours of rigorous body exercises and two hours of meditation. Apart from training, she also had to get accustomed to the ashram way of life.

I am aware of the kind of things that some people have spoken about my guru, but I refuse to agree. Contrary to popular belief, yoga is not just about complicated poses and being able to twist and turn your body. It is so much more; it is a way of life. Hence, there was no night or day for us at the ashram — we were living and breathing it.

During the four years of training at her guru’s ashram, Neetu also got the opportunity to teach and hobnob with well-known personalities such as sitar maestros Amjad Ali Khan and Anoushka Shankar, experiences that she cherishes even today. She then moved to Dubai to teach at her guru’s centre and four years later she felt a strong urge to start something of her own.

I was ready to take on bigger challenges. If you are determined enough, your own teacher will be willing to throw you out of your comfort zone. Hence, I set out on a new mission with my master’s permission.

Neetu came back to India with her friend Manish Pole, and together the two co-founded Total Yoga in Pune in 2010. The duo chose Pune because of the general awareness about yoga being higher as compared to other cities because of the presence of the Osho Ashram and the origins of Shri B.K.S Iyengar. But starting up in a city where they knew practically nobody was going to be an uphill task.

It was like starting the second innings of my life; I had nothing. We started by distributing pamphlets, sticking posters, and meeting as many people as possible.

Sheer persistence led them to a small space where they could open their first studio, which initially had three batches. Neetu had also found herself a place to stay near the studio. Things were starting to fall into place, but Neetu and Manish still had some obstacles to overcome.

We started with a small batch of five–six students and there were days when I used to walk into an empty class and do my practice, lock the studio, and head home, disappointed. We were still paying rent; things had to change fast for us to stay afloat.

And they did. In three months’ time, all their batches were running full and they had to begin another batch. Around the same time, Manish was down with an ankle injury and she was responsible for training all batches.

“My co-founder took care of everything else. It was difficult but we managed.”

Taking Total Yoga to the world

After training their first batch of teachers who would run the studio in Pune, Neetu and Manish stuck to their initial plans of going international and moved to Singapore to set up Total Yoga’s second branch. They had to undertake the same struggles all over again to set up base, but succeeded in training six more teachers who could run the Singapore centre.

It was definitely not easy and I was constantly on the verge of giving up. During such times, I constantly reminded myself why I was doing all this in the first place and kept at it. I used to walk to the beach, do some yoga and meditation and get back to work.

After successfully setting up an international centre, Neetu and Manish moved to Bengaluru, where they set up four centres. It is also the city that Neetu now calls home. Today, Total Yoga boasts of six centres all over India with two international centres — one each in Singapore and California — with a total of 800 students. The monthly revenue in India alone amounts to 8–10 lakh with the average fees being Rs 3,000 excluding taxes per month. While the journey of expansion and growth is something Neetu loves to reminisce about, it is the larger picture which she takes most pride in.

As a yoga Instructor I feel very empowered because I have the power to change people’s lives. My students feel comfortable to confide in me and tell me things that they won't tell their friends or family.

Over the years, Total Yoga has developed its own style of yoga. There are different forms for different stages. Vinyasa improves flexibility, Hatha Yoga works on strengthening the core, and Power Yoga helps in increasing stamina. The one-hour class at Total Yoga involves 45 minutes of asanas and 15 minutes of meditation. All of Total Yoga’s instructors are chosen after two years of training; hence every instructor was also once a student.

According to the government’s Make in India report, the wellness industry in India is worth $490 billion, and wellness services alone comprise 40 percent of the market. There are as many variants of yoga as there are enthusiasts. According to an ASSOCHAM study, demand for yoga instructors is expected to grow by about 30–35 percent in a couple of years. The only- students-turn-teachers approach has helped Total Yoga deal with competition better, feels Neetu.

This helps us in controlling the quality and making sure that only our style of yoga remains exclusive. Another advantage is that we started much before most players could and hence we have a better understanding of the market.

Apart from regular classes, Total Yoga also organises yoga retreats for its students across all centres twice a year in popular hill stations and beaches. Neetu and her team are currently working on setting up a new branch in Dubai. They are also working on a concept called the ‘Sun Festival’, a fitness festival which is expected to take place in Goa in February 2017.

Neetu might have built a successful business empire, but it is still the love for yoga that keeps her going,

I only take 10 percent of the total profits from my international centres. It is not about the money; it is about doing what I love. I want to take Total Yoga to the world.