How to craft the perfect team - Lessons from TaxiForSure journey 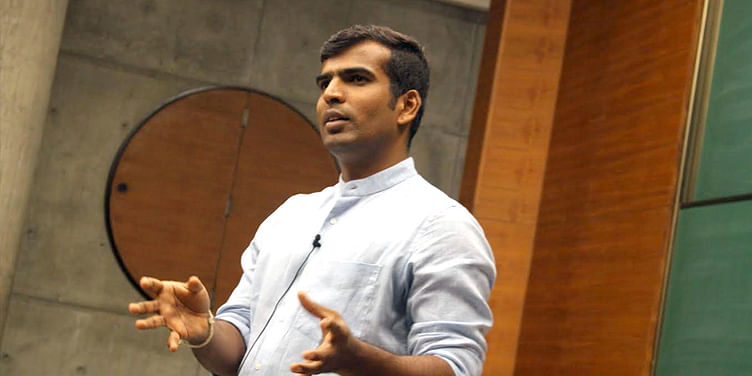 A session with a successful entrepreneur often starts with an impromptu primary survey of “How many of you dare to dream?” It was no surprise, therefore, when Raghunandan G, celebrated founder of TaxiForSure and active angel investor, put the audience through the same test at the start of his lecture. A healthy 40 percent of the jam-packed room raised their hands. Surprised as he was, reclining casually on the presentation table despite there being a podium, he coolly threw one surprise back at them: back in his student days at the same institution, he would have been among those who did not raise their hand.

A lot can happen over a mug of…

Succumbing to a structured, do-what-you-are-told job comes naturally to an entrepreneur. “Two or three years after working, you start cribbing: about your boss, your platinum privilege card, your car and everything else. Typically, you start drinking as well, to facilitate cribbing without inhibitions,” he admitted. However, inspiration struck during one of these sessions, when he and his eventual partner Aprameya Radhakrishna were at a pub, and they faced the fateful problem of waiting for a taxi indefinitely. They jotted down the idea on a napkin, and that was just as well, because neither would have remembered it otherwise. “A lot can happen over a mug of beer”, he quipped, in the heart of our dry state.

Interestingly, had they not been in the habit of discussing new ideas and thoughts, they would never have stumbled upon this idea. Drawing on this, he went on to explain his perspective on entrepreneurial ideas.

The idea of an idea

So how does one generate ideas? Raghunandan had an unequivocally clear answer to that:

Ideas originate from discussions, not during idea generation sessions or agenda meetings. And you need to have those conversations on a regular basis.

You cannot sit down with the express purpose of generating a brilliant idea and succeed. He recalled his experiences as a student: “When you are in a place such as IIM A, it is almost impossible to stay away from discussing ideas with classmates. I engaged in a lot of those too. You hit on a few things, but you don’t have the courage to follow them up with action. I had the Flipkart idea back in 2004 before TaxiForSure materialised in 2008!” Action or no action, there is no greater idea generation tool apparent to him.

And what kind of ideas should one look for? “There is no hard and fast rule, nor any right way to look at ideas.” However, he went on to list three major approaches to idea generation followed by entrepreneurs: “Drawing from the limited experience I have, having looked at the ecosystem a bit more than you guys, the first essential thing is that you should look at all the problems you are facing and figure out whether you can offer a viable solution to any of those. Second, you should look at the different emerging sectors such as virtual reality, augmented reality, drone technology and IoT. Can applications be built using these to address a set of problems? Finally, your idea could be a replication of ideas that are working in certain other markets.”

He laid further emphasis on the fact that the last of the three, replicating foreign ideas, is highly over-simplified in popular perception. “It is not so straightforward.” Listing the multiple considerations implicit, he went on to ask: Does the problem exist here too in the same form? Is the solution suitable and feasible? For the idea to be feasible, it has to be extraordinary, and most importantly, there has to be a market:

Problems exist in every area, but do you have a great solution? For us, the market was already set; people were already using taxis. We essentially came up with a solution that was a lot more convenient than the existing one.

Further, new markets keep getting created. There are a few ideas which were around for a long time but were not feasible until very recently, such as solar energy and virtual reality. He went on to highlight the importance of keeping track of such opportunities for budding entrepreneurs.

Moreover, the focus should be on creating a convenient solution. He elaborated, taking the example of WhatsApp, “The main reason why WhatsApp could penetrate a country like India despite there already being similar players present, was because it did not seek a user’s email ID. All they wanted to know was your mobile number. In India, where a lot of people use the internet but do not have these IDs, it was highly convenient, and that gave them the whole market!” For Raghunandan, it is the generation of these key insights through conversations that can make or break your startup.

Is my idea great?

After emphasising the importance of discussions, Raghunandan moved on to the next logical step. “Let’s say you have stumbled upon something. How do you know it’s a great idea? You typically never will at the early stages.” He drew an interesting analogy here:

How do you know whether your girlfriend, boyfriend or spouse is the right person? Do you know they are perfect from the start? That’s essentially what happens with ideas, except you don’t have to commit to it so early.

So what does one do after one has a potential winner idea? The customer is king, and you should treat them that way, suggested Raghunandan. “You need to determine whether what you think is your product is something people will subscribe to; whether it will engage customers”. For TaxiForSure, there had been a sequence of exceptional customer engagement moving from idea to execution. When Raghunandan and Aprameya had had the idea, the first thing they did was establish the universality of the problem they had identified.

For this, they first conducted an online survey with their friends. Having gotten a positive response but still unsure due to the limited sample size, they ramped up their efforts. They stood in front of the Delhi and Bengaluru airports with an even more extensive questionnaire about the unavailability of taxis on demand. Again, the responses were favourable, but they weren’t enough to eliminate the doubts in their minds. So they hired college kids to stand outside malls and hand out surveys. Out of the 3,000 odd respondents, about 90 percent agreed to having faced the problem.

After this extensive process of validating the problem, they engaged with some of the respondents in person and relayed their solution in detail. The respondents loved it. That, finally, was the point at which both of them decided to quit their jobs. “When your customers tell you it’s an amazing idea, then you know there’s something in it,” he concluded.

Once the idea’s validity has been established, then come the most tumultuous times surrounding the startup’s product concept and business model. The foundation of a venture is laid by the amount of in-depth clarity entrepreneurs have about each and every aspect of their product. And unless these fundamentals are strong, the building is built sans a solid foundation. Raghunandan went on to narrate how they ensured the same at TaxiForSure:

During this phase, you go through a lot of iterations; this is the time you get to make the difficult decisions about your idea. We had this bunch of annoying friends who made us evaluate the idea in and out. Whatever we did, they would say it was not going to work. The more we asked them why, the more we got to learn

At an early stage, the million dollar idea is the only thing of value with the entrepreneur. Understandably, they are protective of it, and there is a natural instinct to refrain from sharing it randomly with anyone. However, Raghunandan suggested an approach quite to the contrary.

Recalling his own experience, he said, “We loved the idea so much that we didn’t want to share it with anyone. We only shared it with those we knew and could trust. We were afraid that better coders would do it. That approach set us back by eight months. Because people didn’t hear the full idea, they didn’t believe in it. After this, we became extremely shameless!” And post this realisation, they did get a lot more useful references.

The lesson conveyed was simple: People are busy with their own lives; they are not waiting to pounce on your opportunities. Not sharing your idea and biding time is going to hurt the startup a lot more than sharing the idea without inhibitions.

According to Raghunandan, the market is the dominant determinant of the venture’s success.

However, one rung below the market, the right team is absolutely essential.

Within the essential requirements that Raghunandan defined for co-founders, there was one rather glaring omission. That factor of skill. He said that sometimes founders may feel they don’t have the right tech background, and hence choose to go for a co-founder from that area. But in a co-founder, you need the right focus and values much more than any technical skills, which come into use all of two or three years.

A far more robust evaluation can be performed by asking oneself: do they have the right amount of curiosity, passion, ethics and integrity? He further elaborated:

If someone has the drive and passion, they will acquire the skills; if someone has only skills, they won’t acquire the passion or the drive. Once the startup gets you to a certain stage, you won’t be writing code, but building an organisation, motivating and hiring employees, resolving HR issues, and raising funds. And after a while you cannot say X is not my domain. Founders need to do whatever is required.

The co-founders have to last the test of time. During the life cycle of a startup, they go through a tremendous amount of difficult times together. In this context, having a good personal equation with other members of the team is necessary. Raghunandan says, “Whether you are able to deal with the person in the worst situations or not is also an important criterion.” Sometimes, founders take out their disappointments on each other. They ought to know when to give each other space.

He went on to add that the co-founders should have ambition but not so much aspiration. “Invariably in any startup, we see that one co-founder has more limelight than the other. In such a case, if both have similar aspirations, it could lead to conflicts.” A lot of startups attribute their failure to these conflicts as well, he noted.

Given all of this, the best way to find a co-founder, according to Raghunandan, is to choose from among those you have known well in life, since you have been able to judge his/her performance in a context different from that of only handling the venture. “In terms of numbers, two or three is good. If it is a huge team, you will be having HR issues on a regular basis”

Finally, a lot of ups and downs will come and go while building the startup. However, no challenge is too big if one loves the group one is working in. Coming to the end of a lecture peppered with pearls of wisdom, Raghunandan left the audience with this final thought:

Enjoy what you’re doing, with a bunch of guys you like: that matters. If you fail, you would have learnt a lot and figured out a lot of opportunities elsewhere. If you succeed, it would be nice to have friends who have the same amount of time and money. It is better than sitting on a pile of cash alone.