[BRICS Summit] India one of the most open economies today: Narendra Modi 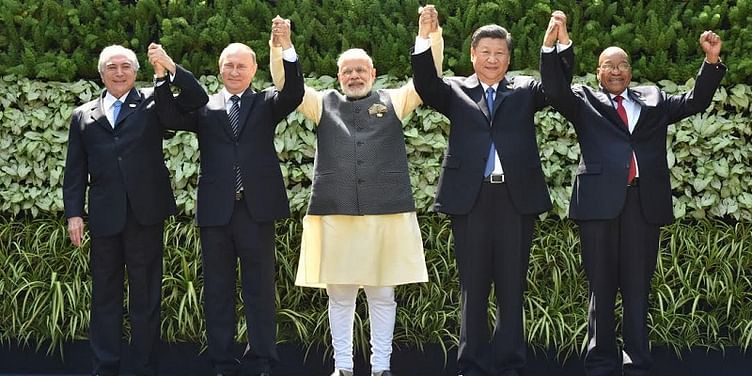 Asserting that results of the reforms undertaken by his government were visible, Prime Minister Narendra Modi today said the country has transformed into "one of the most open economies" in the world with a strong growth rate.

"We have undertaken substantial reforms in the past two years to streamline and simplify governance, especially in doing business. The results are clearly visible," Modi told the Brics Business Council as part of the eighth summit of the five-nation grouping here.

"We have moved up in almost all global indices that measure such performances. We have transformed India into one of the most open economies in the world today. Growth is strong and we are taking steps to keep the momentum going," the Prime Minister said.

The Modi government has undertaken a slew of reforms like passing the indirect taxation legislation on goods and services tax which seeks to make the country a single market, passing the Bankruptcy Code which will help troubled/failed companies find an exit, and through flagship programmes on the administrative front like the 'Make in India' and the 'Digital India' initiatives.

All this has had India's ranking in ease of doing business go up by multiple notches in a year to 39 as per the latest ranking by the World Bank.

The government has also been consistently raising caps on foreign holding in domestic companies in a slew of sensitive sectors like defence insurance and defence.

According to Finance Ministry, as many as 90 per cent of the key economic sectors where FDI is allowed are on the automatic route, which help foreign companies save lots of time to start their operations.

Even though the June quarter growth slowed to 7.1 per cent from 7.6 per cent in the previous quarter, Asia's third largest economy continues to be the fastest growing one in the world and policymakers are expecting the GDP expansion for the current fiscal year to come in at 7.6 per cent and accelerate further in coming years to 8 per cent going forward.

Modi said there were a slew of "matching priorities" between the business council and that of his administration, including dismantling trade barriers, promoting skills development, establishing manufacturing supply chains and infrastructure development.

Infrastructure has been a key focus of the government and investment of an estimated USD 1 trillion has been made to build roads/highways, airports and seaports over the next decade.

Modi also acknowledged the progress achieved by the Brics Business Council over the last three years, since the idea was first mooted at the Durban summit.

He said the Council represents the economic strength and the diversity of the five-nation grouping of the world's fastest emerging economies.

Modi also underlined the need for promoting economic and commercial ties and described this as a "foundational impulse" of the idea of Brics, and added that partnerships create wealth and value in societies.

The Prime Minister also applauded the work done by New Development Bank over the last year and asked the lender to work closely with the Brics Business Council for identifying and implementing large infra projects which can help transform the economies and the lives of the poor.