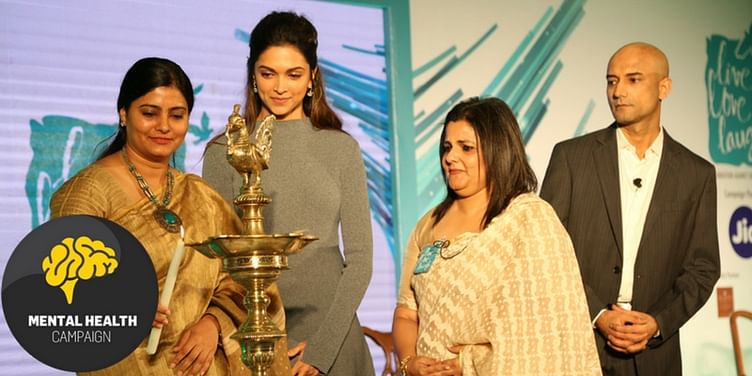 Stigma attached to mental ailments is the main reason why society is struggling to address the problem, and the day we together manage to tide over it and bring about awareness, we will win this battle, Deepika Padukone.

Founder of the 'Live Love Laugh Foundation (TLLLF)', the 30-year-old actress, who herself battled depression, was speaking at the launch of the campaign to raise awareness about psychological disorders on World Mental Health Day.

The foundation was set up in 2015 as a Charitable Trust to champion the cause of mental health in India and focus on depression in particular. The main aim of TLLLF is to reduce social stigma and create awareness around mental health. TLLLF has spread awareness on mental health via its English / Hindi website, through extensive engagement on social media, outreach to various print, TV, radio and digital media outlets, and by undertaking several on-ground activities, such as mental health awareness programmes for school students and teachers, which have already been conducted in 27 schools, reaching 4,804 students and 1,332 teachers around the country.

It is important to realise that in the kind of society we live in today, we have become very competitive, which is a good thing.But, I also think, we have become a little less sensitive to people around us. No one should feel that they do not belong to society, she said.

Sharing her personal struggle with depression, Deepika broke down during the function, and said that it is important that there is a supporting ecosystem of family and friends that allows the suffering person to cope with the disorder with hope and dignity.

When I shared my story first, I did not feel any stigma or shame attached to it. And the reason I came out in the open about it was because I just did not want to feel what I was feeling, I did not let depression to get the better of me. So, I think the root cause is stigma. And the day we as a society can together get over that stigma and raise awareness about mental health issues, we will win this battle, she added.

Why is mental health important ?

Mental health in India is being viewed as India’s next biggest health and societal crisis. It is estimated that over 15 percent of the country’s population lives with some kind of mental health concern. That’s more than 100 million Indians, with the number increasing every year. Despite the large number of people who require mental health attention, India has only 6,500 trained psychiatrists and roughly 22,000- 25,000 mental health workers, including social workers, psychologists and counsellors. What’s worse is that stigma and discrimination faced by those suffering and their family members prevent them from seeking guidance. Only about one in 10 people with mental health disorders are thought to receive evidence-based treatment.

The campaign has been jointly launched by Indian Psychiatric Society, Indian Medical Association and Deepika's Bengaluru-based non-profit foundation, the Live Love Laugh Foundation (TLLLF), and under it, they will develop outreach programmes to highlight the urgent mental health challenges that India faces. Deepika, who had also recently become the brand ambassador of the Indian Psychiatric Society, said the campaign was dedicated to all those people who have survived mental illness.

Anna Chandy, Chair of TLLLF’s Board of Trustees also shared that,

Not only is it imperative to be aware of depression and other mental disorders, it is also important to spread awareness and sensitise society that all individuals who have some form of mental illness have the right to and should be provided the resources to deal with these challenges. Caring and supporting such a person through the journey is the need of the hour; we need to build a nation that promotes social inclusion across every dimension.

Why your actions matter

A special video and poster campaign, "#DobaraPoocho" (ask again) was also unveiled on the occasion. It will run across television, print, digital and radio, and comes even as India prepares to cope with the severe economic and societal burden brought on by the epidemic of mental illness in the country.

Also read : How Deepika Padukone’s Live Love Laugh Foundation is ensuring others escape the nightmare she went through

Questions like “How are you”?, “How was your day?”, “What’s up?,” are asked as a form of greeting. Very often, they are empty tokens of communication –asked and then immediately forgotten. We do not wait for an open, heartfelt response and we’d be taken aback if the person actually responded honestly on her or his state of mind at that moment! The truth is that behind that mask, one out of every ten Indians is afflicted with depression and anxiety. Dobara Poocho was born out of this very need to look at someone again, to observe that someone closely again, to be aware of his or her nuances again, to hold the person close again, to ask again. Deepika could have kept it all to herself, but she shared her struggle and turned it into a movement.

The campaign film for Dobara Poocho has been shot by Nirvana and features simple stories of regular people courageously facing and fighting depression. It is a testament to the strength and courage of the human spirit. The print campaign showcases real people who have gone through or are going through depression, and fought the illness to become stronger and whole.

We at YourStory are dedicating a month long campaign to speak and hear about mental health in support of raising awareness. Watch out for this space, as we do our bit to remove the stigma attached to the disorder. If you have a story to tell, reach out to us at [email protected].