How these IIT Kanpur students raised over Rs 22 lakh, in a quest to make electronic prototyping glitch-free 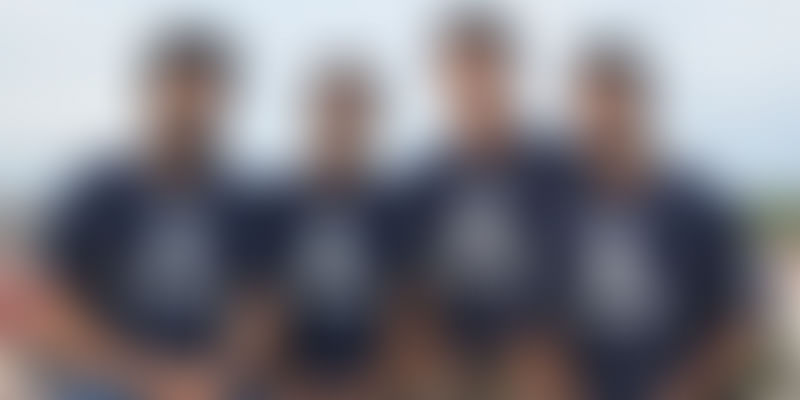 Although developing a product is a fun experience, it requires time and effort to gain the required skills. But when faced with a glitch, most makers are forced to give up because of the patience required to debug and get the project back in working condition.

Inspired from their own pain point, while participating in robotics competitions, four final year IIT Kanpur students decided to try and solve the problem with an electronic prototyping platform for the masses, which would eliminate glitches. Here is the story of how they beta-tested their product, Evive, and crowdfunded their way to go into production.

Evive is an Arduino-based open-source platform for learning and prototyping electronics circuits, creating robots and hacking together IoT solutions quickly. Targeted at makers, the product is positioned for the masses and can be used by beginners to develop their making skills towards robotics, embedded systems; by hobbyists and students to build projects and experimental setups and by advanced users like researchers, professionals and educators to analyse and debug their projects.

With an Arduino Mega at its heart, Evive has a power module, plug and play hardware interface, data acquisition module, prototyping hub and other components to position itself as a ‘one-stop’ platform for makers. The vision is to make building easier and debugging faster and smarter than putting together everything from scratch.

Kanpur-based Agilo Technologies, the parent company behind Evive, was founded in August 2015 by a group of robotics enthusiasts at Indian Institute of Technology, Kanpur. The team consists of Abhishek Sharma (COO), Dhrupal Shah (CEO), Akshat Agarwal (CTO) and Pankaj Verma (CPO). The four co-founders met while they were participating in a Pan-Asian robotics competition, Robocon.

The idea for Evive, an all in one debugging kit, took form while they were participating at the student robotics competition. Talking to YourStory, Abhishek(23) noted that while it brings satisfaction and great joy for makers to develop products, debugging the traditional way is hard. He says:

If things don't go as planned and something goes berserk making your robot malfunction, it takes days to figure out the problem, let alone sort it. We need to separate testing circuits to test different components, to figure out which one is faulty. This makes the entire process very time consuming and frustrating at times.

Based on their personal pain points, the team realised that there was a market need for a simpler device and introduced Evive as the first mass market product by Agilo. The startup had earlier worked on several robotics and automation projects during its initial days. One of them was working on mechanical design, control systems and software for a catalyst unloading robot for Reliance Industries, Jamnagar. Another project was developing a trash compaction device, which is currently 'patent pending'.

So to develop Evive, the team started from the basics - working on simplifying the debugging process by developing a testing kit which could test the most commonly used hardware. The idea matured and more features were gradually added to it. The aim was to integrate everything from learning robotics and embedded systems to building and debugging projects on one platform.

After multiple iterations and prototypes, the team finally had a working product in July 2016. The next step was to manufacture the product in bulk and reach out to the masses. At this stage, the team pooled in about Rs 7 lakh from their own savings and looked to crowdfunding on Indiegogo to raise the remaining Rs 22 lakh they needed to make the economies of scale work.

By September 2016, the team was able to hit their funding target on Indiegogo and are currently 112 percent funded. After managing component supplies and injection molding in August and September, the team is currently in the manufacturing stage and aims to ship Evive to their early backers in December 2016 and to all other backers by January 2016.

Currently ranging from $99 to $269 for different combinations and ‘perks’, consumers can still place orders and get it shipped along with Evive’s first lot of mass production.

How it works and use cases

Abhishek explained, “With an Arduino MEGA at its heart, Evive offers an easy way of interacting with your hardware using its menu-based visual interface, which removes the need to programme the Arduino frequently for basic tasks.”

Evive is IoT ready with WiFi, Bluetooth and XBee connectivity. The product has a 2600mAh Li-ion battery inside, which is estimated to power Evive up to 4.5 hours. Evive can also be powered externally from a wall adapter or power bank, ensuring portability. Abhishek noted,

The variety of ways to power Evive and your devices with it give you flexibility and enhance compatibility. The variable voltage supply can be controlled simply by rotating a knob. Unlike Arduino, you won't need a power supply every time, because of the 2600mAh Li-ion battery inside Evive.

Evive has a ‘plug and play’ hardware interface consisting of motor drivers, servo outputs, potentiometers, switches and LEDs to make working with and driving robots easy. It also allows multi-modal feedback to the user with LEDs and a buzzer.

As an open-source hardware project, Evive is licensed under the Creative Commons Attribution-ShareAlike 4.0 International License. The startup was among the 20 winners of the Hackaday Prize Automation Challenge, and was also featured in Indiegogo's Techie Gadgets Collection. The team sees a lot of use cases for Evive from conducting research, industrial applications to teaching, learning and developing STEM skills and hence have opened a project hub on Hackster for people to share their Evive-based projects with the world.

While the current focus is on fulfilling orders and getting the Evive into the hands of all their backers, the long term goal is to further improve the product based on feedback and also develop more advanced and niche products in the future.