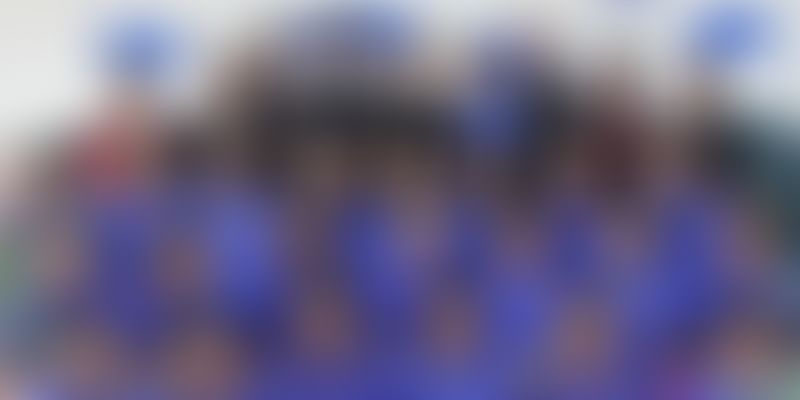 “It seems like a different lifetime. It has been a complete 180 degree shift and alignment, from the years of me being a workaholic marketing manager to now running on my toes behind my toddler. I had always thought that I would be able to balance work and taking care of my child, but I just ended up extending my maternity and not going back to work,” says 36-year-old Sulochana Kumar.

This was the exact same problem Nupur Dalal and Chirag Shah saw their office colleagues and friends experience. Many found that it was difficult to get reliable and professional daycare near their offices in Mumbai and Pune. Often, team members who were from double-income nuclear households would extend their maternity breaks and simply not return to work.

This is when the duo decided to build Little Big World, a childcare support space where parents work. The team sets up their centres inside factories, offices and corporate parks.

The initial days of research

The couple found that it was a genuine problem that most couples in today’s world faced. Deciding to work on their research, they found that there was a plethora of corporate daycare options in the US that allowed women to return to work hassle-free.

So, over the next two years, Nupur and Chirag took time off and, during their holidays and trips abroad, decided to visit daycare facilities in the US and Netherlands. And they then compared the same to options back home. Looking at the differences, 38-year-old Chirag, who has worked with the likes of ICICI Bank, Britannia Industries and American Express, says,

“The gap was too large and the need too important for us not to solve or look at, so we just decided to take the plunge.”

Thus, with Little Big World, the team caters to children starting from the age of four months, so that the mother can return to work as soon as her maternity period ends.

Getting the right team

Chirag adds that they integrate preschool learning with daycare operations in a full-day format (often with night shifts as well) to match the working hours of the parents. The operations are based on daycare and learning standards prescribed by the US-based National Association of Education for Young Children (NAEYC).

After understanding the gap in the market, the couple began looking for people with experience and training in international standards of childcare. This is when they met Priti Shah, who had just returned to Pune after ending a decade-long stint as the Program Coordinator of a corporate daycare for Johnson & Johnson in the USA with over 200 kids.

She had also got it audited and accredited through the NAEYC, believed to be the toughest childcare regulator.

“Our day is made when we hear how our caretakers’ husbands are tweaking their day plans, picking up household duties and attending to their children to ensure that their wives get to complete their meaningful work at Little Big World,” says Chirag.

After the trio got together, they began to set up Little Big World, with the aim of gaining accreditation and meeting the highest standards for of hygiene, supervision, nutrition and learning.

The team is run by over 125 women, and Chirag says that he is the only male member in the team.

Building SOPs and working against challenges

Their first centre in the prime IT hub of Hinjawadi got the ball rolling. But one of the biggest challenges was to ensure standardisation as they scaled. Chirag adds that they operate in a society where every parent and grandparent has different notions about how to raise a child.

They expected the same at the centre. The team had to standardise their programme on how a child would be handled at Little Big World, and started off with standard operating plans (SOPs), processes and manuals for several key aspects like supporting a child’s toilet needs, dos and don’ts on disciplining children, feeding them and bed times.

The next problem was convincing large companies to allow children at the workplace. Chirag adds that it was ironic that several of the large Indian companies spoke at length on pro-employee culture but wondered, in the same breath, at how mothers would focus on work if a crèche was present in their office. Chirag explains,

“We met a company with Olympic-sized swimming pools, large gyms and separate management cafeterias that shied away from allocating a 2,000 sqft space for a daycare. Part of the challenge also lies in convincing well-intentioned companies that secure, standardised childcare operations can be set up without a legal risk to them in the case of an eventuality.”

Bringing in a differentiator

With the growing number of working parents, the need for quality daycare centres is fast growing. There is Mumbai-based The Little Company, a daycare firm that both caters to individual customers and works with corporates to offer baby care facilities within offices. There is also Footprints Childcare, a day care center and pre-school chain in and around Delhi. Some others are Klay Schools (across India), We Care (in Bengaluru), and Mothers’ Pride (across India).

The idea of Little Big World is to assure the parent that they needn’t hunt for a pre-school or daycare during the developmental learning phase of a child. Their in-house curriculum borrows from the best of Montessori, multiple intelligence, mind maps and Reggio Emilia methods of learning perspective.

The nutrition plans are governed by nutritionists from medical partners Surya Mother and Child Specialty Hospital in Mumbai and Pune – the go-to experts in India for neo-natal and medical care for newborns and children.

The staff is trained to administer first aid in over 30 emergency situations till medical or parental help is made available. The team conducts monthly/yearly doctor visits, quarterly parent teacher meetings, and quarterly events for parents and grandparents to interact with their children at the centre.

“We encourage parents to come to the centre to nurse their children at a convenient time. Thanks to CCTV cameras, parents get see their child in action during the day. Our centres are equipped with fire-fighting equipment and restricted security access,” says Chirag.

Priti says that Ferrero’s insistence on English as a medium and benchmarking the pedagogical standards with the Kindergarten in their Italian headquarters has kept them on their toes. She adds that the socio-economic background of the families they support here has made them stretch beyond their standard urban/ corporate offering.

Being tasked with providing the over 160 children with the best possible preschool education in English was a challenge.

“Some of them are malnourished when admitted. We then introduce a special diet plan for their weight gain and prescribe a similar but cheaper alternative for meals at home. We also undertake counseling and education of their families through parent sessions and bilingual newsletters so that the same hygiene and nutrition learning standards are adapted at home,” adds Priti.

The revenue model revolves around either charging the parent or the company, or may even involve a part-subsidised system.

While bootstrapped, Little Big World has a large vision.

“Over time, we see large companies either setting up in-house crèches or subsidising the rent and interiors burden we bear at our corporate park centres for their employees if they can’t carve out space within their own office,” says Chirag.

Today, they claim to run six centres across Maharashtra, including multi-tenant centres at large corporate parks catering to most of the IT giants of Pune.

“We foresee a paradigm shift in corporate outlook towards on-site childcare once the recently approved Rajya Sabha bill mandating crèches at workplaces gets cleared in the next Lok Sabha session. We are now well poised to spread wings to other cities and corporates,” says Chirag.