Robots will control your personal wealth. Are you ready? 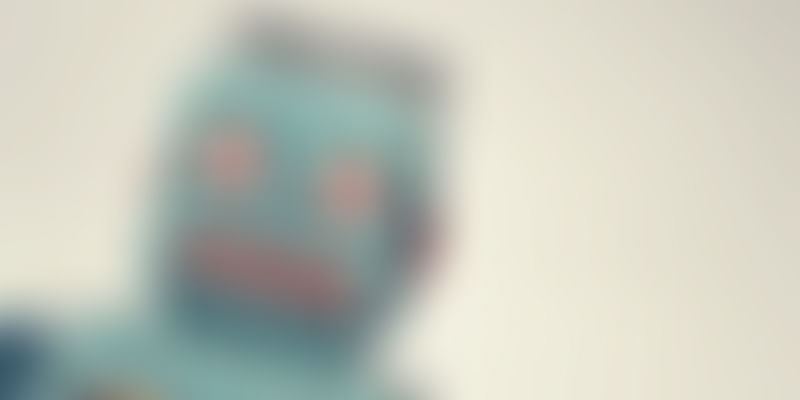 Investments in the future will be based on algorithms and patterns charted by robot. Emerging as one of the hot sectors in fintech, robo-advisory can come across as the next big disruption in the space.

According to YourStory Research, there are close to 50 Indian early-stage startups flocking around this sector. A Deloitte research paper states that the top 11 firms in this segment globally have seen explosive growth since market entry, managing close to $19 billion Assets Under Management (AUM) in 2014.

So, would robots be taking over? Precisely!

In a normal scenario, when a customer walks into a financial institution ready to invest in mutual funds, a wealth manager explains about an investment breakup based on market signals.

This wealth manager is what robo-advisory is disrupting. Robo-advisors will provide you with the breakup while basing their recommendations based on multiple backend algorithms.

Today, any medium-sized bank branch might have three to four wealth managers assigned. And banks like ICICI have close to 4,450 branches across India. This obviously doesn’t include the exclusive wealth management branches. Therefore, this is the scale of change that robo-advisory will bring about, given the number of banks and their branches.

So, why is it important this time?

The answer lies in the question itself! Do you think 2003 was the best time for Ola to launch its services? Might not be! Cab services existed even before Ola. But what led to the surge of the cab revolution was an ecosystem (or intersection of multiple enabling factors) based on the smartphone revolution, 3G data penetration, payment mechanisms (like Paytm) and Google Maps.

Similarly, the advent of technologies like big data, analytics, machine learning and automation has led to the movement of robo-advisory.

Additionally, for robo-advisory firms to flock the market now, there is an active ecosystem developing to bring this service to the consumers. Some of the factors include:

However, what we are talking about is the consumer slab of robo-advisory. Historically, wealth managers who have serviced HNIs have always been equipped with the most basic form of data analytics. Now, startups are leveraging the power of AI to penetrate till the middle of the financial pyramid (i.e. the banked populations of the country).

In the US markets, financial behemoths like Charles Schwab Corporation and Vanguard have been successfully adopting robo-advisory for their operations. Further, companies like Personal Capital, SigFig, Motif Investing, Financial Guard, Trizic, Folio Investing and FutureAdvisor (acquired by BlackRock) are all in the foray.

According to reports by KMPG, financial majors like Wells Fargo, Bank of America - Merrill Lynch, and Fidelity Investments have discussed or announced automated financial advisory services. In fact, regarding a conversation around robo-advisory at the DealBook Conference 2015, James Gorman, CEO of Morgan Stanley, was quoted saying that “Whether we build or buy it, we should have it.”

But, with India having the lowest mutual fund investment rates (seven percent), and mutual funds accounting for only 3.4 percent of total investments by individual investors (including HNIs and retail), how is the robo-advisory technology intervention going to thrust a change in the ecosystem?

Maybe, Ishaan Gupta, who runs a digital investment management platform ‑ Wixifi, has the answer to this. The 32-year-old-entrepreneur tells us:

He claims so because this sector is a capital-intensive business with companies witnessing high burn rates for acquiring customers. Hence, companies which already have large customer tractions will have an edge, adopting the technology and providing it as a service.

He also claims that the coming days will be interesting for the industry, with banks adopting this as a service.

Banks no longer want to invest their workforce and capital to acquire every customer. They are becoming selective towards individuals who are at higher income brackets with more disposable income to invest. Obviously, they want more bang for the buck. So for them, the rest of the population might move to an automation or robo-advisory model.

On the other end is Amit Mehendale, Director and Co-founder of robo-advisor platform robobanking.in, telling us about the current state of the industry. He says that there are currently two ruling models in the segment - regular plan and the direct plan. In the regular plan, the advisory platform (or marketplace) gets a commission from the distributor (of the mutual fund) for every investment made. This leads to biased perceptions in the market.

In the case of direct plan, the final consumer or the direct investors pay a flat fee to the advisory platform. However, users make investments by themselves, not paying the platform for any execution. At present, according to Amit, 90 percent of the market seems to be dominated by the former players (pursuing the regular plan). However, he claims that the dynamics will change in the next two years, with both plans having equal market share. Eventually, direct plans will start dominating the market. He adds:

“Today’s users are smart to assess the value of a certain service. No longer does the market pay for execution, but rather on the value and quality of the advice provided. A classic example was the broking field where the commission of the brokers fell drastically since 1995. Further, with better regulatory framework like eKYC, executions will become even simpler in the future.”

Ishaan says that the regulators are pushing for fee-only or direct model. With newer developments, SEBI is asking firms to disclose the amounts they have been receiving from mutual funds, in order to cut the bias in the ecosystem. This could be good news particularly for the robo-advisory segment.

But, what about the trust? Ishaan’s answer to it is fairly simple. He believes that once adoption starts for financial institutions, which already have established trust amongst its customers, people will start adopting the technology.

However, the current models offered by startups do involve some personal or telephonic intervention to give users the required confidence.

Adoption of the robo-advisory services

The bigger players have already marked the foray in this space.

At present, the bank claims that the platform only gives advice and helps clients with their investing decisions. Clients are required to put the transactions themselves. While getting encouraging feedback from the users, moving forward, they expect more clients to patronise the platform.

“With the advances in technology, availability of more computing power and modern theories and practices in investing, we expect more and more firms to use technology to advise their clients and use interfaces where clients can take investing decisions easily.”

The way this technology will evolve depends on clients’ experience. The experience will be derived not just from the ease of usage, but also through the depth and suitability of advice. Robo-advisory has the capability to take away the biases move to a more structured and rational investment process.

While having immense potential, Abhishake believes that robo-advisors will need to collect and process more information about the clients to really understand their situation. They will need to have robust methodologies and capabilities to incorporate all the information that they collect.

This is in contrast to a relationship manager or advisor who may effortlessly pick structured and unstructured information during client conversations and use it as an input while making an investment plan. Besides technology, there is also a dependence on products available. Exchange Traded Fund's for example are particularly suited for a robo-advisory framework.

While, veteran in the fintech space and Managing Partner at Prime Venture Partners, Sanjay Swamy believes that in the next two to four years, we can expect the following major developments with respect to this technology,

“Financial advisory services in India is still in the nascent stage - and have mostly catered to the affluent because of the high-touch approach. It is clear that for this (robo-advisory) to scale, automation and low-cost approaches are going to be key. However, customer education needs to be addressed first - and once that is done, robo-advisors will be relevant.”

Further, he believes that such technologies will be key in the long-run to achieve mass-distribution and personalisation required in India. Sure people will initially try smaller amounts and build trust over time, but once they have a good experience, they are likely to jump in whole heartedly.

And this could be true. In terms of robo-advisory, one can draw parallels to the ATM revolution which hit the Indian economy in late 1990s, but only saw adoption in early 2000s.

Just like the former revolution, instead of going to a bank and withdrawing cash from the human teller, today’s ATMs have evolved to a point where apart from just dispensing money, they can memorise user preferences and fulfil requests from customers.

Similarly, instead of going to a human wealth advisor, the masses would trust automated systems to help them with their investments. A vision which the Indian financial ecosystem seems ready to embark on!