On day 2, BengaluruITE.biz throws up surprises, discussions, and digital benefits 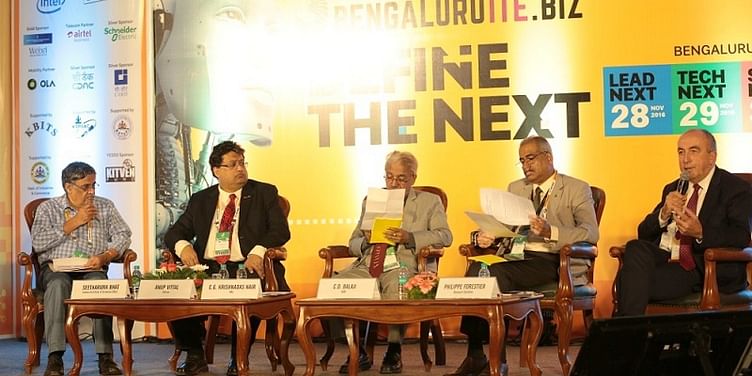 BengaluruITE.biz has thrown up many surprises for the government with homegrown fibernet companies coming forward to partner with it.

ACT Fibernet, India’s third largest fiber-optic broadband provider, has come forward to connect startups at a concessional rate and also has a special student plan for municipal and government schools in Bengaluru.

As startups require broadband with excellent speeds and efficient bandwidth, the ACT network spread all over the city has decided to partner with the Government of Karnataka and offer those startups registered with the IT department broadband connections at their homes or offices at a concessional rate.

“We have our network spread all over the city. We will give them priority connections and maintain the lines,” Bala Malladi, Chief Executive Officer of ACT Fibernet told YourStory.

At the event, Malladi also spoke on translating Digital India to a reality. Having begun as a small startup many years ago — it started with providing cable television to homes and offices in Bengaluru — is the reason ACT has come forward to support startups now.

ACT has also connected more than 50 government and municipal-run schools in Bengaluru free of cost on a pilot basis. “This will benefit school children as it will improve their learning abilities and it is a good push towards Digital India,” IT Minister Priyank Kharge said.

ACT has also gone a step further and introduced a special student plan for children studying in government and municipal-run schools in Bengaluru. Malladi said the students can opt for a connection at their homes at very low costsfor 10 mbps speeds.

Malladi is passionate about this project where they have partnered the Karnataka government as he himself studied at a zilla parishad school in Bheemavaram in Andhra Pradesh. In fact, ACT has already connected 150 government-run schools in Hyderabad with broadband.

ACT also has started wiring up CCTV cameras for surveillance and security and connecting them with police stations and the police control room in the city on a real-time basis. They have already completed a CCTV project in Basavanagudi and Malleswaram areas and a smaller such programme in Banaswadi.

Other sessions included a discussion on ‘Live Smart, Work Smart’ and the impact that technology will have on the daily lives of people, businesses, cities, and governments. Moderated by Nivruti Rai, GM India and VP, Platform Engineering Group, Intel Corporation, the panel discussion covered, among other things, the fact that by the year 2020, 50 billion connected devices will be in function across varied sectors and citizen services.

A session on aerospace and defence, moderated by CG Krishnadas Nair, President, SIATI and Former Chairman, HAL, had an eminent panel including Philippe Forestier, EVP, Dassault, delved into the need for building a sustainable ecosystem where design excellence, product superiority, and seamless governance could take India into the next big phase.

Nair said Karnataka was one of the first states to come up with an aerospace policy. The state is also home to aviation excellence. The panellists spoke about universities having extensive R&D facilities and that with Make in India, there was a real potential to cash in on the opportunity it provided.

Nair said India is very cost-effective and spoke of the Chandrayan mission which cost just one-tenth of the NASA mission. The future is to move away from licenced production to joint ventures in design and development.

At a session on telecom, N Sivasailam, additional secretary, department of telecom, said last-mile connectivity was the need of the hour to reach even the remotest villages which will include digital inclusion.

For the first time, the IT event included augmented reality, virtual reality, and gaming and animation under one roof. The government announced that a finishing school and centre of excellence will soon be ready to give impetus to this emerging field.