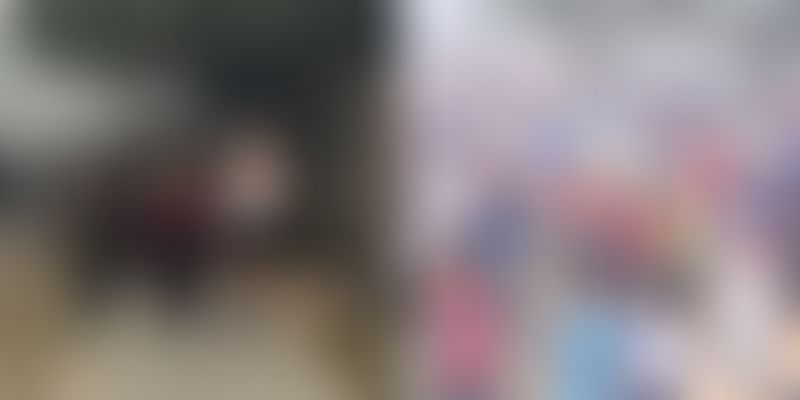 The Salwan Marathon started in 1995, long before marathons in India were in vogue. The run that started small with a budget of Rs 2,500 and 300 students running around the streets of Delhi's Rajendra Nagar and Ridge Road has today evolved into the world's largest marathon for schoolchildren.

It all started when 62-year-old Inder Dutt Salwan, Trustee of Salwan Education Trust, had visited a science exhibition at Salwan Public School, located in Rajendra Nagar. Straightening the tie of a student, he had asked, "Son, which games do you play?" "Sir, video games!" came the prompt reply.

Inder Dutt, who is a passionate runner himself, recalls how shocked he was at the reply. "I felt that there was something wrong in the system. I felt the need for the current generation to get out of their classrooms and discover the power of physical activity," he recalls. The run that was organised soon after triggered the 21-year-long standing tradition of India's oldest marathon.

The marathon has gained immense popularity among youngsters. "We reach out to 1,500 schools across the country every year. People see honesty in this run. It is a humble attempt to get students to run and experience the inspirational power of running. Running is the cheapest sport. All you need is a pair of shoes," Inder Dutt says. Speaking about the involvement of the visually impaired children in the marathon, he adds,

“My mother worked for visually impaired children. She started a school for blind girls who were abandoned by their families. Today, over 800 girls study in the school. We started the run with the visually impaired students to integrate them into mainstream society through sports. These students are otherwise restricted to reading books in Braille.”

Apart from the 4.5 km run for visually impaired and differently-abled kids, the school children will also be competing in Under-14, Under-16 and Under-18 categories, where they will run in courses of 4.5 Km, 6 Km and 8 Km in length respectively. There will be separate marathons for boys and girls.

Speaking about the challenges faced in organising the run, Inder Dutt tells us about the safety and security concerns of the children. “The next great challenge is to conduct the race in the fairest manner. We promote fair play and clean sports at the grassroots level. Overage runners and doping amongst students is a big challenge.”

The focus of the run this year has been to cleanse Indian sports of doping and other unethical and illegal practises. Dope and age verification tests have been made mandatory for the top 20 winners across all categories. Cameras and GPS tracking systems will trace whether the runners have completed the entire route.

To ensure the safety and security of each participant, over 4,000 volunteers, marshals and physical instructors will also be a part of the run. Speaking about the volunteers and the team that makes the marathon happen, Inder Dutt says,

"If you plough happiness, only happiness will come out. Through this marathon, it is this happiness that is multiplying. For the children, I feel running as well as sports brings them closer to their inner self and helps them understand what karma and compassion are all about. The volunteers and marshals are not paid any money for their contribution. It's all about reaching out, talking to them from the heart and telling them that sports needs to improve at the school level."

Institutions under the Salwan Education Trust have also gained a reputation for promoting sports in a systematic and planned manner. The schools under the trust have their own sports curriculum for each grade, as Inder Dutt hopes the children will bring Olympic medals home in the future and make India proud.

Many students who once took part in the marathon are today employed as sports instructors or coaches is these schools, and are actively involved in the pursuit of this collective dream.

Inder Dutt wants to take the marathon to other places, especially smaller cities. “In fact, we are strongly contemplating taking this run to rural India, considering that almost all the winners of the past years have been from rural backgrounds. We think it's their DNA and the struggle to go beyond themselves that make them give a tough fight to the urban children,” he says.