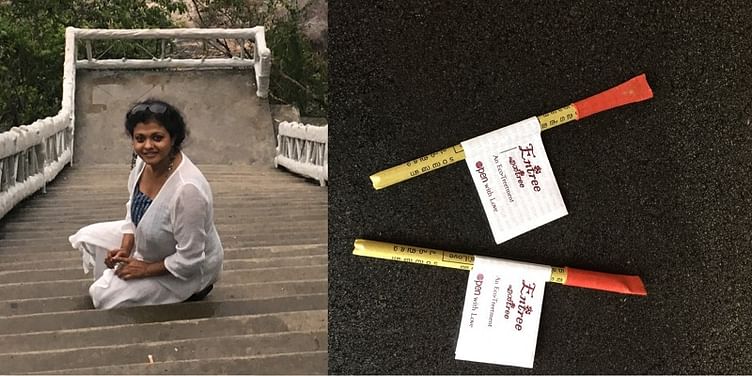 Have you ever stopped to wonder where the hundreds of pens you purchased over the years have gone? Losing a pen is perhaps one of the most common experiences we collectively share. What makes things worse is the way the market has changed to make pens seem insignificant. From those special ink pens that were once owned and cherished for a lifetime, we have come down to disposable pens.

In US alone, 1.6 billion disposable pens are thrown away every year. In September 2005, global pen manufacturing giant BIC announced the sale of its 100 billionth disposable pen. To put that number in perspective, 100 billion pens placed end to end can encircle the globe 348 times. These pens, made of plastic and other non-bio degradable materials, are a huge waste. Recycling plastic pens is difficult too, since, unlike plastic bottles or bags, pens have metal components and residual ink left in them.

To battle the menace of disposable pens in her own special way, 42-year-old Lakshmi Menon runs PURE Living (Products Up-cycled Recycled and Economised), a Kerala-based social enterprise that makes disposable pens from paper that grow into trees when disposed. The social enterprise, that employs elderly and differently abled women, upcycles paper waste from printing press and develops these plantable miraculous pens.

Lakshmi hails from a small town in Ernakulam district of Kerala. The designer at heart completed her degree in Home Science and went to US to explore her creativity, and before she knew it, she was designing jewellery for models at the New York Fashion week. Lakshmi recalls,

“During my visits to Kerala, I used to teach crafts to orphaned kids. During one such visit, I taught them how to roll paper and make pens out of them. This was a product that I used to make and sell at an art gallery in San Francisco. It was during this workshop with children, that I had the idea of embedding seeds in the paper pens to make them a perfect eco-friendly solution to the menace of disposable plastic pens. That is when I decided to start PURE Living.”

Even the name of her enterprise carries the philosophy Lakshmi deeply believes in. “Pure stands for our eco-friendly approach, while Living is all about being responsible towards enhancing quality of life of women through employment and training,” she adds.

“The Wicksdom initiative creates lamp wicks rolled by impoverished senior citizens abandoned at poor old age homes. The wicks are sold to individuals and organisations, and the entire money goes to their makers. Through these two initiatives, we have had the opportunity to not only provide livelihood to many women and senior citizens, but also restore in them a sense of accomplishment and dignity.”

PURE Living has a single production unit, where, under a single roof, women come together to make these products. “Even my 92-year-old grandma, who is suffering from Alzheimer's disease, sits with us and helps in sorting the caps for pens by colour and size. She considers herself a major contributor in the production unit and deeply believes in our cause,” Lakshmi says.

However, since all these products are handmade, they generally cost higher than the market alternative. Lakshmi adds,

“Our pens cost Rs 12 when compared to the disposable pens that are sold in market for Rs 3. We can’t compete with them over price, but those who understand the value we add, prefer our products.”

PURE Living has sold over 1.5 lakh pens over the past three years, but the market is much larger. Currently operational in Kerala, Lakshmi believes that PURE Living can really make a difference.

“There are around 45 lakh school going students and over 10 lakh college students throwing away at least three pens a month in our state. That is 1.65 crore pens a month. Add to it a literate population of 3.2 crore. We are speaking of tens of crores of pens getting buried in our lovely green state every month.”

Since June 2016, Lakshmi has started focusing on marketing her products better. With greater awareness, demand for Lakshmi’s miraculous paper pens have been on the rise. Their retail capacity is on the rise too, as Fabindia plans to feature these pens in their stores this Christmas season.

Lakshmi is also launching a new initiative called #Pendrive, under which general public and students in particular will be made aware of the damage plastic pens cause to the environment. “It's important that this initiative starts from student’s community. They are not only the largest user base of plastic pens, but also belong to the critical age group that needs to me made more aware environmental causes,” Lakshmi says.