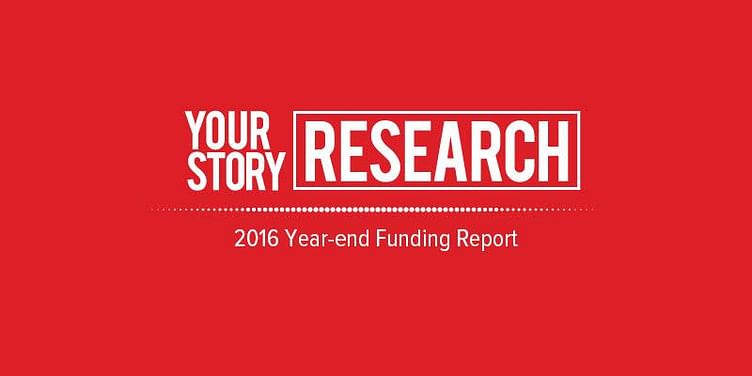 Indian startups saw $4 billion in risk capital being deployed across 1,040 angel and VC/PE deals between January and December 2016. According to YourStory Research, the disclosed funding announcements have shown a decreased value of 55 percent from the same period last year (2015) and a decrease of 20 percent from 2014. About $9 billion in VC/PE capital had been invested in 2015. The number of deals in 2016, however, has increased by 3 percent over last year. On an average, four startup deals were announced every weekday throughout 2016. After all, the year wasn’t only about the gloom and doom; funding hasn’t dried up, it just

The number of deals in 2016, however, has increased by three percent over last year. On an average, four startup deals were announced every weekday throughout 2016. After all, the year wasn’t only about the gloom and doom; funding hasn’t dried up, it just waned after last year’s exuberance. The down rounds have generally been escaped in 2016. We have only seen markdowns so far, with none of the unicorns going out and raising a mega round.

2016 saw a drawback in the quantum of funding in the startup ecosystem. Manish Singhal, Founding Partner, pi Ventures, says, “That is the best thing to happen to the Indian startup ecosystem. Before this drawback, quite a few of unviable business model-based startups raised money. With this drawback, a lot of these companies have closed down or have pivoted to something else. At the same time, the same corpus of money is now available for IP-based product startups, which is heartening to see.”

Despite many accelerators, angles, and seed-stage investors, why do we still see low numbers when it comes to series A graduation? This is mostly because:

Delhi, Noida, and Gurgaon (NCR-Delhi) saw 33.3 percent of the total deal value, while 31.4 percent went to Bengaluru-based startups, followed by 26.8 percent to Mumbai-based startups. Chennai, Pune, and Hyderabad received 3.8 percent, 1.7 percent and 1.4 percent of the deal value respectively. Other cities that are emerging as startup hubs and generating investor interest are Ahmedabad, Jaipur, Indore, Kolkata, and Vadodara.

Citrus Payments Solutions was acquired by PayU (a Naspers Ltd company) in a $130 million all-cash deal.

Given all this, the startup exit scene has been fairly active in 2016. Overall, around 180 M&A transactions took place. 2017 should see the momentum further building up.

Manish anticipates that exits will become IP-driven rather than market share-driven. “We are on a cusp of a change - from a market share-based thesis to an IP-based, product-based one. I believe that the next wave of startups that will make it big from India are the IP-based product startups. Technologies like AI, ML and IoT will dominate the tech scene, and will lead to disruption in many sectors.”

The trend to look forward to

Going digital isn’t merely a nice thing to have anymore, it isn’t even a choice. More than ever before, digital has become the way of business. This has been reflected in the way the B2B and SaaS space is getting the limelight - Freshdesk, Druva, Qubole, HelpShift, Zenoti and Mad Street Den Zarget, all sang the enterprise song all the way to the bank.

“2017 should see more funding for product startups. Technologies like Artificial Intelligence and Machine Learning are disrupting many sectors. We should see good momentum in healthcare, fintech, and logistics in the coming year. The emphasis will be on supporting companies with real product IPs. Early-stage deals will definitely pick up. Late-stage deals may take some more time to recover,” says Manish.

Yes, e-commerce will continue to be an area investors will look at, as will foodtech. There were over 150 e-commerce and marketplaces deals this past year, followed by 105 deals in the enterprise/SaaS space. Healthtech saw 97 deals, fintech 86, edtech 58 consumer internet 56, foodtech 44, transportation 32, digital media 29, and logistics 28.

Most of the prominent funds are sitting on capital that needs to be deployed over the next couple of years. Blume Ventures closed its second fund at $60 million. Nexus Venture Partners raised $450 million for its fourth fund. Accel Partners India has raised $450 million for its fifth fund, and the largest venture capital firm, Sequoia Capital India, raised a record $920 million for its fifth fund. Watch this space over the next couple of months as we dig deeper into how this capital is going to be deployed, and in what sector.