Miss Moti and the art of body positivity 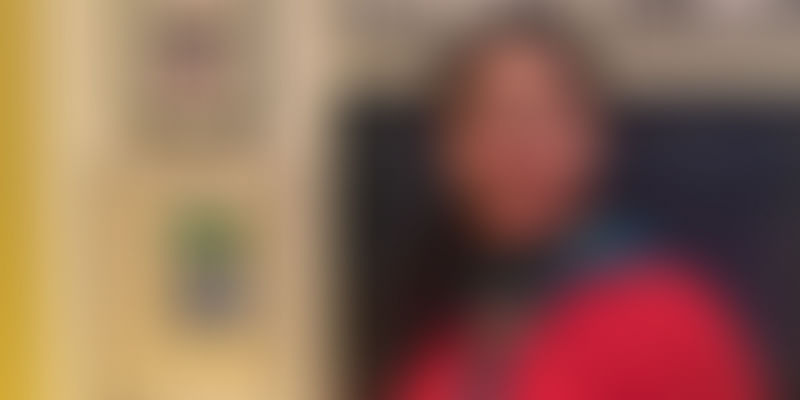 You wanted to ask a question but kept your mouth shut for fear of looking stupid. You wanted to get on stage and show off your beautiful voice but let what other people might think hold you back. Self-doubt has befriended us all in different ways — how can it be stopped from holding you back?

Kripa Joshi, an illustrator and comic artist from Nepal, turned to art to deal with her own issues and soon created comic character Miss Moti and her weekly illustration of quotes playing on the words ‘moti’ and ‘motivation’.

We caught up with Kripa to talk about the journey of Miss Moti and how she has dealt with her own challenges in life.

Kripa’s friend used to call her “moti.” Turning a derogatory word into something positive, she decided to call her character ‘Miss Moti’, which has a dual meaning — it can be read as a plump woman or if you pronounce the ‘t’ differently, it could also be the Hindi word for ‘pearl’.

“So the name and the logo suggest that Miss Moti might look plump and ordinary, but on the inside, she could be extraordinary and a gem of a person,” says Kripa.

Apart from her own body image issues, the inspiration for Miss Moti came from her mother who, despite her weight, was always energetic.

Kripa’s comics lack word bubbles — there is only art, no text. “The lack of words invites readers to put their own thoughts, feelings, and experiences into the story, and it makes Miss Moti more relatable. The wordless comic also helps the story transcend borders and language barriers and makes it more universal. An image speaks a thousand words.”

Kripa spent her childhood in the bosom of the family. Being sent to Jaipur to complete her 12th from

Maharani Gayatri Devi School was a big change for her, but art kept her company. Later, an Indian Council for Cultural Relations (ICCR) scholarship saw her pursue a bachelor’s degree from a college in Baroda. "During my final year, I made the ‘Sofa so Good' series of paintings which depicted people as different kinds of sofas and chairs. Some paintings also dealt with the issue of body image and being overweight."

After completing her studies in India, she moved back home and worked as an art teacher and illustrator till 2005, when she received a Fulbright Scholarship to the School of Visual Art in New York and went on to study MFA in illustration.

It was here that her comic journey began and Miss Moti was born.

"I realised the scope of comics and the kind of stories one could tell through that medium." A course on the history of comics introduced her to the work of Winsor McCay and his Little Nemo stories about a boy who falls asleep and has wonderful adventures in slumberland, leaving readers wondering whether it was a dream or reality.

"This play between dreams and reality inspired my Miss Moti stories. Generally, there are little elements in her stories that make you think that maybe events are not just in the imagination,” she says. Stylistically, she shares that her work was initially inspired by the Maithali or Madhubani folk art from Nepal/India but has changed over time.

The 38-year-old didn’t consciously set out to make Miss Moti a feminist, “But in defying the modern standards of beauty, I think she provides a counterpoint to the notion that a woman’s worth is in how she looks. Miss Moti does not let anything, including her weight, hold her back in life,” shares Kripa.

In the first comic, Miss Moti was wearing a dress with spots on it. The dots represented societal restrictions and judgement, and Kripa then accordingly showed Miss Moti in the nude to represent that she was free from everything.

Kripa grew up in a household with strong women, and her mother and grandmother have been her inspiration. “The values that a woman can be who and what she wants to be are deeply instilled in me and I guess Miss Moti reflects this.”

Getting back after a break

After spending three years in New York, she moved to the UK with her husband. Since Kripa missed her comic community and friends, she started volunteering at The Cartoon Museum in London to gain

experience and started running her own art and comic workshops. In a secondary school in Richmond, she also worked as an art technician. After motherhood, she began working primarily from home on Miss Moti and some children’s book illustrations. One of the most challenging phases of her life was tackling postnatal depression.

To get out of this, she began illustrating motivational quotes online every week. “The motivation project that I am currently working on is more influenced by my personal life. It was started at the beginning of this year as a way for me to get back into making Miss Moti after a two-year break since the birth of my daughter,” she reveals.

The hardest part of postnatal depression was a lack of self-belief and an abundance of self-doubt.

Motivation Monday has come to her rescue and knowing that people wait for Miss Motivation keeps her going.

Over the years, Kripa has also been a part of several anthologies. “Miss Moti and her Short Stories is a collection of my past contributions to anthologies like Rabid Rabbit, Secret Identities, and Strumpet. Having survived the Nepal earthquake in 2015, she co-edited the HOME anthology with her friend and manga artist Elena Vitagliano to raise money to conduct art therapy sessions for children rendered homeless by it.

When Kripa started Miss Moti, she ensured that the character didn’t come across as belonging to any one geography. “I gave her olive skin — she is neither brown nor white.”

But when she started her motivation series, she found that there were a lot of people from South Asia who were responding to Miss Moti because of the word 'moti' and its meaning — a fat woman. The wordplay got their attention immediately.

“Since there are so few South Asian characters represented in the mainstream comic world, I thought perhaps I could make her slightly more dark-skinned. She doesn’t look Indian, Nepali, or Sri Lankan, so everyone could connect with her better but I wouldn’t say she is only for South Asians. I want her to be a global ambassador for people all over.”

The response Kripa has received keeps her going. One of the memories she cherishes is from nine years ago — it was her first Comic Con in New York and she had carried copies of her first comic, Miss Moti and Cotton Candy, and a lady bought one copy for herself and one for her local library because she felt that others should read more about fat characters.

“Last year I was at another convention and a black woman came up to me and said it was great to see a non-white female making comics and the character being so different.”

It is moments like these that inspire her, along with the motivation she derives from her own work. “Miss Moti is not me, but she inspires me,” says Kripa.

The weekly motivation project, where Miss Moti is illustrated along with a quote, has helped

Kripa deal with her own issues. This year she plans to reconnect with agents to see how she can get publishing houses to publish her work.

“It is a year of big decisions for me. I have to decide whether I want to publish with international publishers or those in Nepal or India. Miss Moti was born in New York, so it seems a fitting decision to start there. I also want to get Miss Motivation published in book form.”

This year is also going to be about overcoming her own self-doubt and fears of failure and putting herself and her work out there. Kripa is determined that fear of failure is not going to stop her.