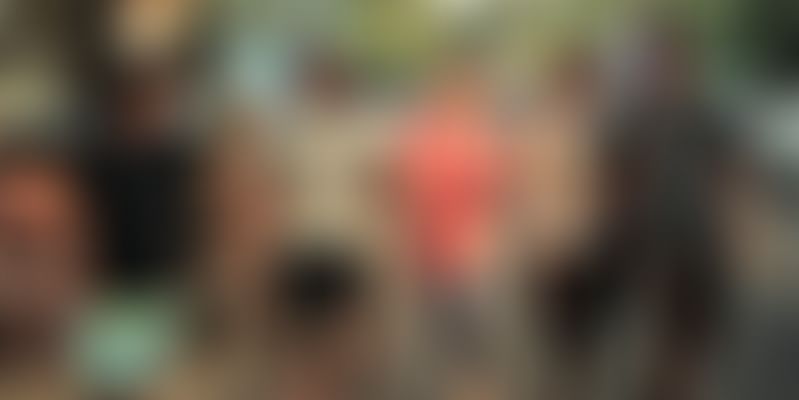 Jason Noronha’s path to starting up almost entirely follows the hero’s journey template. Jason had a great job, but felt something was missing. So, he went travelling, found his calling, and came back home to start up. But the story doesn’t end there and it even has a twist. To find out, read on.

From the sun, sand, and sea state of Goa, Jason completed his Bachelor’s in Engineering from Nanyang Technological University in Singapore. He joined Accenture as a financial consultant in the island country and worked there for three years. In mid-2010, Jason volunteered in Kenya for six months and in March the next year, he decided to quit his job to figure out what he really wanted from life. He went to the South American country of Guyana with the international non-profit VSO and travelled across the continent, through Brazil, Venezuela, and Suriname. By late 2011, Jason was back in Goa, where he spent a few months enjoying a mini-retirement of sorts. Three months into the mini-retirement, Jason realised he needed to work. Then came the question of what to do.

From susegad to starting up

Jason had spent many a lazy day during his mini-retirement on the sunny beaches of Goa and had noticed the extremely bad state of the cheap beachside guesthouses that budget travellers stayed in. This was not the experience he had when he travelled in South America and other countries and stayed in hostels. The 31-year-old says:

Having travelled to over 40 countries, the fact that there were no (real) hostels in India was always at the back of my mind.”

In February 2012, Jason and a junior from Nanyang, Amber Jalan, launched Asterix Hostel in Vagator in North Goa with a seed investment of Rs 7 lakh. The hostel was a success, making its way to the top of listings on booking sites like Hostelworld and finding a place in Lonely Planet. However, success did not mean the two founders were on the same page as to scale up plans. So a little over a year after launching Asterix, the duo parted ways and shut down Asterix.

Laura Anna Pawliczek was one of the first guests at Asterix. She was working with an NGO in Delhi and then moved to Goa to launch a German beer garden. When Jason was moving on from Asterix, he and Laura decided to launch a hostel chain and thus The Hostel Crowd was born in 2013. Hostels Jungle in Vagator and Prison in Anjuna were launched the same year. Incidentally, Jason’s Asterix partner Amber moved to Delhi to launch Moustache Hostel. In 2014, Old Quarter was started in Panjim and in 2015 Summer was started in Palolem. The chain also launched their first hostel outside Goa, in Kerala’s Fort Kochi, called Maritime.

In between, Jason’s brother Joshua Noronha and their cousin Joel Noronha joined The Hostel Crowd. A little over a year ago, Joshua’s college friend Raunaq Kapoor also got on board.

Standing apart from the crowd

The hostels are primarily located in properties that are unique. The Vagator property has forests for neighbours, so it is called Jungle. The Old Quarter, as the name suggests, is located in two over 100-year-old buildings in Panjim’s Old Quarter. Maritime is also located in a heritage building in Fort Kochi.

The team, right from the start, used design to create a distinct character for each of the hostels. Says 26-year-old Joshua:

The world isn’t going the McDonald’s way, where everything looks the same. When a traveller goes from one place to the other, the hostel should do justice to the location and be a reflection of the destination. Palolem is very different in its vibe from Panjim, even though they are in the same state. That is why we have given each hostel a different name and not called them just The Hostel Crowd."

So the Old Quarter’s exterior has been painted to resemble Goa’s famed azueljos, colourful ceramic tiles. Prison, the chain’s party hostel a stone’s throw from Anjuna flea market, has design elements of prisons like metal doors with slots for food trays and black and white colour scheme. Maritime has nautical themes, with paintings of ships and white and blue stripes covering room walls. The interiors are uniformly bright and cheerful, with large and comfortable common areas for backpackers to lounge around in.

The hostels range in size with Maritime, the smallest, offering 28 beds and Jungle, the largest, offering 83 beds. The dorm beds are priced at Rs 500, while a private room goes for Rs 1,500.

While the hostels are design-led, Joshua says the idea is to give travellers a great experience. So, the team got the basics done first. There is a simple breakfast offered as part of the tariff for all guests, clean beds in dorms and private rooms, hot showers and the mandatory free Wi-Fi. The women’s dorms have extras like a dressing table, hair dryer, and hair straightener. But a hostel is much more than a place to crash at the end of a long day of sightseeing for most travellers. Many tourists opt for a hostel to meet other travellers and to have a fun experience.

Keeping this in mind each hostel offers ‘experiences’ – barbeque nights, yoga, movie watching under the stars to name a few. But they did not stop there. “We cater to the 18–30 age group primarily and this group, especially the millennials, gives a lot of importance to experience,” says Joshua.

So they set up cafes in two of the hostels, at Panjim and Vagator, for guests to hang out at, have a good coffee, and meet locals. The third café, branded Bombay Coffee Roasters, will open in February in Palolem. They then realised that guests also wanted interesting and affordable tours offered by a reliable operator. Thus was born Hathi Tours. The team piloted the tour business for a year but launched it officially only a couple of months back. The tours, which are open to non-guests of The Hostel Crowd, include Goa regulars like a trip to Dudhsagar Falls and a visit to a Spice Plantation. But, keeping their clientele in mind, Hathi also offers unique experiences like a pub crawl that allows travellers to experience some of Goa’s renowned bars and clubs.

The chain also offers a twice-weekly shuttle service, which is open to guests and non-guests, between the Goan towns where their hostels are situated. “Ola and Uber have not entered Goa yet. Tourists have to change multiple buses or use expensive tourist taxis. Panjim to Palolem can cost Rs 2,500 by taxi,” says Joshua. The Hostel Crowd shuttle does the same route for Rs 500, with a 50 percent discount for their guests. “These concepts were all part of the vision – to contribute to the travellers’ experience. First get the basics right, and then enrich that experience,” says Joshua, adding that roughly 70 percent of their guests are foreigners and facilities like the shuttle help make their travel experience smoother.

The company, which has Jason, Laura, Joshua, and Joel as shareholders, is targeting Rs 3 crore this financial year. The Hostel Crowd has been operationally profitable right from the start, but the team has reinvested profits into the company. While Zostel is the only real big hostel chain in the country, it uses a franchise model. Stops Hostel runs hostels in Delhi, Jaipur, Jodhpur, and Varanasi, while Moustache Hostel runs four properties in Agra, Jaipur, Jaisalmer, and Udaipur. Their Delhi hostel has shut down. For The Hostel Crowd, direct competition is primarily in the form of budget guesthouses and standalone hostels. Roadhouse Hostels is the other chain with a strong presence in Goa with properties in Palolem, Arambol, and Anjuna.

With the launch of Maritime in Fort Kochi, The Hostel Crowd now intends to expand its footprints beyond Goa. Next launches will all be outside Goa, with location scouting going on. One of the challenges of running a hostel chain is knowing how many hostels can be run without spreading the resources too thin. Since word of mouth is what works for a hostel, the experience cannot be diluted and for that, the management needs to be hands on. Other challenges are linked to infrastructure – electricity going off, slow internet, and water suddenly getting switched off. However, Joshua says, with the five hostels the team has a template in place that can now be replicated with ease.

While the company was chugging along nicely, Jason and Laura decided to formalise their partnership and got married in 2016. One of their shared dreams was to live in New York and so the duo took a decision that is still rare among founders of Indian startups – they decided to step back from day-to-day operations. Joshua, who was earlier with MuSigma, is now the CEO and Raunaq is COO. “Most founders can’t step away from their companies because it would collapse without them. In our case, we were able to set up a stable enterprise and hand over all the responsibilities to the right person – Joshua,” says Jason, who is now a student a New York’s Columbia Business School.

So there you have it – sometimes a startup hero’s journey doesn’t end with running the company he founded; it could just be one of the many pit stops in life.