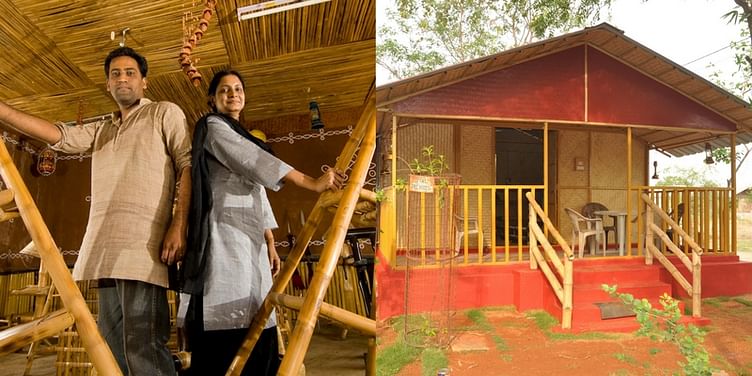 Prashant and Aruna are promoting bamboo houses made by tribal artisans.

Did you know that bamboo is the fastest growing plant on earth? There are places in India with abundant production of bamboo, and yet we see that a lot of people prefer cement housing and constructions. Here’s a couple who’s not just promoting the use of bamboo but also building communities around bamboo.

Aruna Kappagantula and Prashant Lingam are now running a social enterprise utilising bamboo as an economic driver and providing sustainable livelihood opportunities to rural and tribal communities at the same time.

In search of bamboo furniture

It all began with the couple's search for furniture made out of bamboo and their search landed Aruna and Prashant in a small village called Katlamara in Tripura on the Indo-Bangladesh border.

Aruna and Prashant, who couldn’t get quality furniture closer home, did not want to settle for any substitutes of wood, steel, iron or plastic, and began on a quest to find out more about the bamboo industry, or the lack thereof. Upon reaching Katlamara, Aruna and Prashant discovered that the communities that were trained in and dependent on bamboo were facing livelihood issues.

Aruna and Prashant, who knew nothing about the domain or the communities working with bamboo, decided to support the communities in their own small entrepreneurial way, and thus began their journey into making bamboo their life.

“We wanted to model our venture around bamboo housing and bamboo structures, which was a complete shift from the traditional handicrafts for which bamboo was known for. Bamboo in India was still being used for small handicrafts, scaffolding, ladders and construction of temporary houses,” says Prashant.

Aruna and Prashant travelled extensively in all the forest locations where bamboo was known to grow. During these travels, they interacted with the farmers, rural and tribal people who had working knowledge on bamboo.

“After coming back from these travels, in 2010, we started Bamboo House India, with the specific purpose of housing. Until then no farmer told me about the Forest Act 1927. As per the act, only tribal people living in the forest could cut bamboo and sell it only to the government,” says Prashant.

The government, which buys bamboo from the tribal people, sells it in the market through auctions, which is just two days in a month. Moreover, the auctions happen only six months a year since bamboo is not cut during the monsoon.

After having hired a team of artisans and workers, the couple spent three years in research and development, learning skills from the local people, understanding the difficulties of working with bamboo and transporting it.

“We noticed that if I want to work in a particular region with bamboo, the bamboo should belong to the very region. If the temperature of a particular area was high, I had to get bamboo from an area with a similar temperature. So for instance, if I was working in Hyderabad, I had to get the bamboo from Rajahmundry, where the temperature would go as high as 45 degrees. By the end of three years, we were facing a debt of Rs 80 lakh,” says Prashant, adding that despite it all the couple did not quit and after a short break started again.

Aruna and Prashant landed their first project with a school in Hyderabad, which needed them to construct a bamboo structure for their terrace.

“We followed the Columbian style of architecture. We started working on designs, and prototypes. We conducted crash, crush tests, and we did sand bag tests, to understand load and the resilience,” says Prashant.

There started the couple’s journey of making bamboo houses and within the next two years, they completed about 150 projects across the country. They started making bamboo furniture, housing structures, plantations and interiors.

“In 2016, we revised our business model and we decided to work only with bamboo boards. There’s only one community in the northeast that is making bamboo boards in India. One penthouse of 250 square yards, gives employment to at least 30 women in the rural areas. So we started focussing on houses since then,” says Prashant.

Two years ago, Aruna and Prashant started yet another venture known as ‘Recycle India.’ The couple is now building houses and structures out of plastic bottles, used tyres, upcycled cycle furniture and recycled drum furniture.

“On our last PET bottle project, we are working in Medak for a 2,100 sqft structure completely with PET (Polyethylene Terephthalate) bottles. We purchase PET bottles from scrap dealers at Re 1 per bottle and use in place of conventional bricks that would have cost more. But in this particular case, we put up a big banner in the workshop asking the community members to discard the bottles at the workshop, so all the community waste would gather here and be put to use. We needed approximately 25,000 bottles for this project,” says Prashant.

Currently, they are on a mission to convert the cement benches to benches made out of tyres, in the public parks in Hyderabad.

Apart from being entrepreneurs, Aruna and Prashant are also social activists who have been fighting for the removal of restrictions. The couple launched online petition to relax the forest laws, by collecting one lakh signatures. As a result of which, the government relaxed the laws in Sarsanapally and Gadchiroli in the Telangana state today, which allows the tribal people to directly sell bamboo in the market.