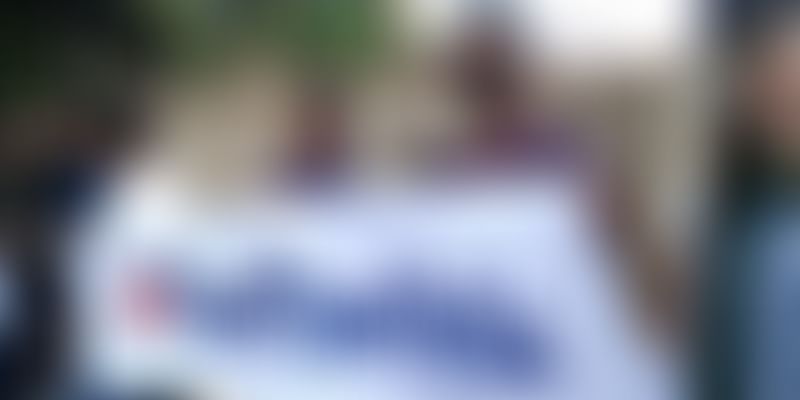 The Bruhat Bengaluru Mahanagara Palike (BBMP), the administrative body responsible for the civic and infrastructural assets of the Greater Bangalore metropolitan area, has decided to cut down 112 trees along Jayamahal Road for the construction of the proposed steel flyover between Basaveshvara Circle and Hebbal. The BBMP's cell for road infrastructure even requested the forest cell for the permission to cut these trees.

Protesting this move, citizens of Bengaluru formed a human chain which stretched for almost until a kilometre along Jayamahal Road. Slogans like "Mara kadi Bedi", "Beke beku," and "Mara beku" were put up on banners and boards which were carried by almost a thousand protesters.

An organisation named Citizens for Bengaluru had organised the protest. Coordinator for Citizens for Bengaluru, Srinivas Alavilli, spoke to the press and said that cutting down trees is not going to reduce traffic congestion in a city where the public transport system is not up to the mark.

According to a report by The News Minute, Srinivas said, "Bengaluru is called the garden city because of our trees. That brand is under serious threat and so are our trees and children. No amount of road-widening is going to fix the traffic congestion. It is ridiculous to cut 112 fully grown trees in Jayamahal which represents the kind of Bangalore that we want to preserve. BBMP asked for objections. They got it today! We demand BBMP acknowledge the mass objection expressed in the form of a human chain and immediately cancel the road-widening plan. The overwhelming public response to this event on such short notice makes us feel confident that citizens will fight the battles time and again to protect what is Bengaluru."