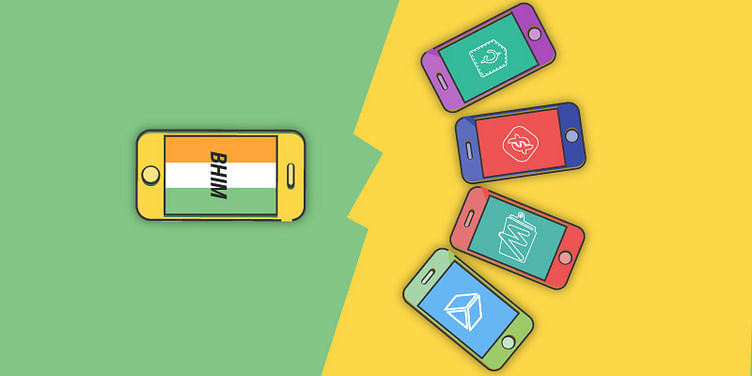 The Bharat Interface for Money (BHIM) app, launched by Prime Minister Narendra Modi in December 2016 to enable fast, secure and reliable cashless payments, has created quite a buzz in the payment ecosystem. It saw about 1.1 crore downloads in just 20 days of its launch. But it has also raised several questions with regard to the challenge it poses to startups that offer Unified Payment Interface (UPI)-integrated apps, as well as the larger issue of government interference in the app market.

“BHIM has the potential to replace all the individual apps that many banks, wallets and some of the startups leveraging the UPI architecture are promoting in the country. This begs the question: who should be the right owner of innovation? Should there be a market-driven approach or a directed approach by the government or regulator that converges everyone towards a common architecture,” asks Manish Khera, serial entrepreneur and investor in the impact space, particularly in financial inclusion.

However, Adhil Shetty, co-founder and CEO, BankBazaar.com, believes that the Indian fintech space is big enough for all quality players to compete. There is an obvious need for alternatives, despite BHIM showing great traction, as it doesn't fill all the gaps, and other UPI-integrated apps provide different add-on features and services essential to various customer categories.

Startups that recognise this need and develop high-quality products that are backed by excellent service will thrive. That said, competition is always good. It drives people and organisations — both in private and public sector — to push themselves to build better products. So the ultimate benefactor will always be the customer.

Sanjeev Chandak of ftcash says BHIM has not affected his company's brand positioning, since it's a full-stack payments and lending provider to the merchants, with UPI being only one of its payment options. BHIM app, on the other, is a concentrated effort by the government to increase awareness of the benefits of digital payments and UPI.

Damandeep Singh Soni, Vice President, Mobikwik sees the advantages of the government's push for BHIM, but wonders if promoting just one app isn't myopic in the larger scheme of things. “When demonetisation happened, we were quite happy because we aligned with the cashless economy. Now the government has launched an app called BHIM, which has really helped create awareness about the various apps in the country. For me, BHIM has really helped me get more users because cashless is quite popular among consumers in India. So in that way, it has been positive. However, the fact is that the government is promoting just the BHIM app; it should have been done differently because government should focus more on promoting cashless society rather than promoting just one product,” he points out. Mobikwik currently has 45 million users.

According to him, the differentiator lay not in the technology but in innovation, like the speed in addressing reservations, for example, as such companies compete for customers in a largely cash-based society.

BHIM has opened up the market—which had, hitherto, known only wallets as the fastest way to make payments—to a newer, faster and better mode of transaction. It has played the role of an ice-breaker in the system and people have started exploring mobile payments like never before, a development that is sure to benefit the entire ecosystem.

The BHIM app is considered by many to be a significant initiative in facilitating digital payments in the country. Looking at the pace of adoption in the country, Narendra Modi’s dream of Digital India does not seem to be all that distant. The payment architecture too has evolved from National Electronics Funds Transfer (NEFT) and Immediate Payment Service (IMPS) to UPI and now BHIM. Says Manish,

While NEFT was a batch processing architecture, IMPS made the transaction instant. UPI provides the customer with a universal handle which rides on the IMPS architecture. While many of the wallets already had architecture of UPI, making the architecture standardised has made it immensely inter-operable, though there remains the next step of universality of payment handles. BHIM app embeds the UPI architecture and makes it convenient for face-to-face transactions to happen.”

BHIM is inter-operable with other UPI applications and bank accounts, and has been developed by the National Payments Corporation of India (NPCI). This seals the government’s push towards digital payments after the November 8 announcement to scrap high-value Rs 1,000 and Rs 500 currency notes. As it is Aadhaar-enabled, the app puts an end to the fuss surrounding other e-wallets. BHIM app is now available in both Android and iOS and has witnessed 10 million users.

Kalpesh Mehta, Partner, Deloitte, says, “BHIM app has lot of advantages as you make transactions through different bank accounts, thereby making the app consumer friendly. Whereas when you go to particular e-wallet and payment bank, you are expected to transfer funds from your other accounts into this for usage. If you have normal salary account which is covered under BHIM app platform, you don’t need to open another account and use it for the same purpose, even if you have multiple bank accounts.”

Launched in February 2016 by the NPCI, the UPI allows one to make payments using one's mobile phone as the primary device for transactions, through the creation of a ‘virtual payment address’, which is an alias for one's bank account.

Fuelling the concept of digital concept and cashless economy is one of the key focus areas of the government now. And the advance success of BHIM signals the demand of such digital infrastructure among the people.

Manish believes NPCI should take a more non-commercial approach and not focus on business model for BHIM, and look at the deeper objective of digitising payments in the country, by allowing all transfers through BHIM app without any costs.

When it comes to positioning a brand in order to stay ahead in the competition, it is imperative to analyse and address the market requirements. Creating a benchmark enables a company to position a brand in terms of products and services to tread a path towards gaining competitive edge and increased customer base.

The startups would have to reorient their approach to more specific and niche business opportunities rather than the simplistic face-to-face digital payments needed in the country to promote the efficiencies of digital payments.

While there is likely to be protest from many quarters, especially wallets and payment-related startups, and many would want to put the onus of their non-sustainable business models on these directed initiatives of the government, this directed approach is best for the country and must be supported and enhanced,” says Manish.

Since ftcash offers payment options to merchants, for example credit/debit card, UPI, wallets, net banking, it is planning to initiate numerous marketing activities depending on the merchant category and their unique requirements.

Ftcash is different from BHIM as merchants do not need to sign up with BHIM/UPI separately. Once they sign up with ftcash, they are instantly enabled with UPI payments. In addition, ftcash provides a range of services that are relevant to the merchants on top of payments, like lending, dispute resolution etc. Ftcash has 40,000 users.

Chillr co-founder Sony Joy states that the digital payment market is huge enough to allow multiple players to identify their niche and grow there. App experience will be the differentiator in the long run. Chillr is differentiating itself by customising banking and financial products based on the requirements of the customers.

He believes picking the difference between BHIM app and any other platform would result in an unjustified argument because BHIM was launched to make an average Indian comfortable with the concept of digital transactions and mobile payments.

Instamojo, which is an on-demand payments and commerce enabling platform, allows merchants to accept digital payments across multi-channels like WhatsApp, email, SMS, Facebook etc., while buyers can choose to use their preferred payment modes, be it through cards, net banking, UPI, wallets, or EMI.

Says Sampad Swain, Founder, Instamojo, “We continue to increase our merchant acceptance network across unbranded products & service providers online. We have already crossed 2,00,000 plus registered merchants on our platform. We will continue to follow our playbook, irrespective of introduction of a new payment instrument.”

A recent RBI report on digital payments mentioned that even in November 2016, only 3 percent of transactions were through wallets, while the rest were through cards. It is easier to get customers to use debit or credit cards than using e-wallets as they are comfortable with the practice. Hence, it is important for companies to develop a sense of trust and flexibility in the customers.