Every move it makes, every vow it breaks - this device for car sends alerts to owner's smartphone 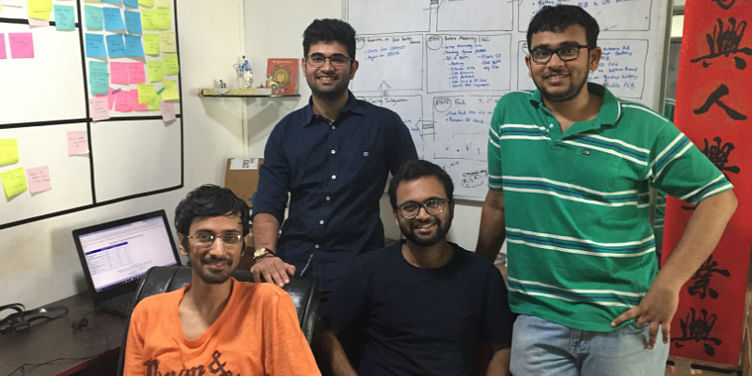 There’s a good chance, and a better reason why the first question you’re asked when you tell your parents that you were involved in an accident is if the car’s all right! Often a family’s loftiest tech investment, a car is a mobile asset that is difficult to track and decipher – in case of towing, theft, misuse, malfunctions. Four IITians set out to solve this problem with a small plug-and-play device that would give real-time updates to one’s smartphones from the car.

The urge to do their own thing

Of the four, all engineers from IIT Bombay and in their mid-20s, while Pushkar Limaye, Prathamesh Joshi and Urmil Shah were from Mumbai, Rohan Vadgaonkar hailed from Nasik. And being IITians, they did land their share of plush MNC jobs from companies like Bain & Company, P&G, and Schlumberger. But building something of their own was way up on their list of priorities. “The decision to quit our jobs and start up was an easy one. The hard part was convincing our parents. The 'meeting' where I convinced my father was probably harder than any VC meet!” recounts Rohan, CEO and Co-founder of Carnot Technologies Private Limited, which was incorporated in August 2015.

The four were part of the IITB racing team, and the cars they made were fitted with a connectivity platform developed by them to monitor their performance from the pit. “One day we thought why don't our normal cars have such systems? Cars are a huge deal in an Indian family, and so everyone wants a way to know where it is and if the car and its occupants are safe,” says Rohan.

They set up a pilot in May 2015, just outside IIT campus, and bootstrapped their way to the first version of the product – a hand-soldered prototype they christened ‘Carnot’, which according to Rohan was “really unstable, simple things like increased humidity in rainy season would cause malfunctions”.

Carnot was a small device that could be plugged into the on-board diagnostics (OBD) port of a car. “The OBD port is a standard but less known feature of every car since 2008. Using the data available at the OBD port and some additional sensors, Carnot’s proprietary algorithms send instant alerts for any incident like towing, theft or even accidents to one’s smartphone. To be more precise, it sends the data to its cloud over a 2G sim card which comes pre-installed, which, in turn, sends the results to the Android or iOS app,” explains Rohan.

The device also helps diagnose issues with the engine and battery easily and can call for free roadside assistance anywhere in India, through a partner. Additionally, Carnot helps track mileage and records all your trips. Besides, the data collected from the cars is extremely useful in several industries, especially in the motor insurance industry. Says Rohan, “We struggled a lot to design the antennas for GSM as well as the GPS to make it robust enough to receive signals in cramped positions the port is often present in.”

Their first machine-manufactured prototype came five months later. They then wrote to the CEOs of all insurance companies on LinkedIn, heard back from a few, and were selected by one to pilot with. Around the same time, in November 2015, they raised a seed round of funding from Kunal Shah and Sandeep Tandon, the founders of FreeCharge.

They worked at a car dealership for a few weeks to get insights into consumer purchasing behaviour, and saw that the user was most interested in purchasing Carnot at the time of buying the car. Hence, they reached out to dealerships to stock their products.

The price of the product includes a healthy gross margin. “Soon, we will also deliver services like insurance renewal and service booking through the app, etc., for which we will get a lead generation fee,” explains Rohan.

After the funding, they scaled up their tech team and started designing the device with a view to mass produce it. Around this time, they faced issues due to non-standard OBD ports, and built a data science team to develop algorithms that can make the device compatible with any car.Recalls Rohan,

“Our first mass manufacturing design failed miserably when we sent it for beta testing. Everything that could go wrong did, but it was a huge learning opportunity.”

They quickly learnt from the experience and started a second iteration in July 2016, having resolved the compatibility issue by capturing the voltage signal while the battery was charging. By November 2016, they had a stable, fully functional product on hand that could easily scale.

They response was great from the start. A user informed them how he was extremely happy to get alerts when his aged father left and returned home, and he didn't have to call his father every so often anymore. Micro fleet owners have noted that their drivers automatically stopped misusing the car when they realised they were being tracked. Moreover, they are already working with one of India's largest motor insurers to provide them with analytics to build better actuarial models and improve the profitability of their portfolio.

A little over two months ago, they hit the market after a soft launch, and have over 1,500 users now. Says Rohan,

“Our current problem is that we don't have enough inventory and are working to build that up before we go into full launch. We're a little short of $100K in revenues and are already profitable on a per unit basis.”

Additionally, online targeting is working really well for them, where their acquisition cost is about 10 percent of their retail price.

Soon they saw a large market opportunity in two wheelers, but they posed unique challenges. No bikes in India have any sensors or OBD port to deliver the features they can in a car. “We invented a way to read the battery voltage fluctuations and use that to infer the vehicle parameters like RPM, gear, etc. This is something we have filed a patent for,” he states.

Last month, Carnot Technologies won the Qualcomm's Design in India Challenge along with the $100K grant.

Zooming out, and zooming past

The market size for products like Carnot is upwards of $1 billion considering the sale of new cars and bikes only. There is CarIQ that started in 2014 and now focuses only on insurance telematics. There is also Autowhiz and Minda group's Carrot. MapmyIndia also has a product called DriveMate. “Most competitors buy hardware from China and build an app – the former is often substandard and the OBD port is so non-standardised in India that it's almost impossible to pick an off the shelf product and make it work seamlessly. But all our tech is done in-house,” says Rohan, adding, “so, it gives us a lot of agility in responding to customer requests.”

Carnot Technologies is expected to break even in the next quarter. For scaling up, it plans to leverage social media marketing, and will be looking to partner with more OEMs and dealerships. “We are looking to clock $2 million in revenue in FY17-18,” says Rohan.