Celebrating the legacy of Sarojini Naidu, the driving force behind women’s equality in India 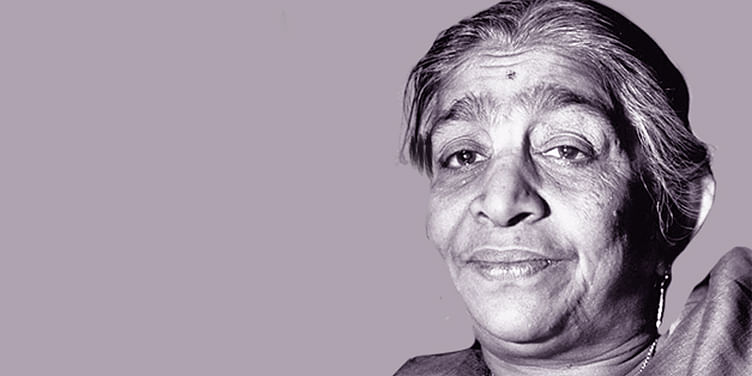 The unspent joy of all the unborn years,

Will prove your heart a traitor to its sorrow,

And make your eyes unfaithful to their tears.”

She was called the ‘Nightingale of India’ with good reason, a woman who called out the patriarchy at a time when our own country didn’t understand the urgency of the word ‘freedom’. Sarojini Naidu wasn’t just a child prodigy, she was a women who wanted to take the Indian flag across the many oceans. Remembered for her lyrically mesmerising poetry and her infinite contributions to the struggle for independence, Naidu is a beacon of empowerment, drive, and most importantly, hope for men and women of all races and all ages.

Naidu’s penchant for poetry was realised at an extremely early age, when her father, Dr Aghoranath Chattopadhyaya, read a poem she had scribbled at the back of her math textbook. Encouraged by her father’s positive interest in her writing, Naidu went on to compile several deep pieces that definitely did not seem like they were penned by a 12-year-old. In fact, when she requested her father to assist her in writing out a Persian play, Maher Muneer, he was so impressed with the final product that not only did he circulate it among his family and friends but also sent a copy to the Nizam of Hyderabad.

The latter, impressed by the child’s burgeoning talent, granted her a scholarship to study overseas, and she thus went on to study at King’s College, London at the impressionable age of 16. Later, she joined Girton College in Cambridge and finally returned to her homeland, only to find that the menacing conditions of Indians under the British colonial masters had worsened fourfold. Filled with despair at the untold miseries she saw in the eyes of her countrymen and burning with rage at those responsible, Naidu made a paramount decision to dedicate her life to fighting for ‘Swaraj’ and the empowerment of the Indian woman.

Emboldened by the patriotic zeal exuded by her fellow countrymen, Naidu began to start actively looking at the political climate. Hailing from a Bengali heritage, she was deeply affected by Lord Curzon’s infamous Partition of Bengal in 1905. Joining in on the protest marches against the same, Naidu’s path crossed with Gopalkrishna Gokhale, one of India’s greatest freedom-fighters, who advised her to use her words to reach out to the masses and encourage them to join the movement. A few years later, she met Mahatma Gandhi and actively joined forces with his efforts into securing ‘swaraj’ for the country.

Around the same time, she began to look into matters of women suffrage, and in 1917, collaborated with Annie Besant and founded the Women’s India Association. The same year, she led the delegation to meet the then Secretary of State, Edwin Montagu, for the recognition of women’s suffrage. In 1918, she pushed for the passing of a resolution supporting women’s franchise, in a special congress session in Bombay. In 1919, she travelled to England to as a representative of the Home-Rule League deputation to put forth the clause for women’s suffrage. Along with this, she travelled extensively across India, campaigning for women’s rights and helping educate women in the same.

The passing of the heinous Rowlatt Act had filled the country with outrage. This incident, coupled with the Jallianwallah Bagh Massacre and the inhuman treatment meted out to the peasants and cultivators of smaller districts, prompted Gandhi to launch the country’s first non-cooperation movement, that Naidu was first to join and head from the front-lines. In 1921, when riots broke out against the visit from the Prince of Wales, Naidu visited the disturbed areas and encouraged the people to foster Hindu-Muslim unity and kinship. When Moplah rebellion broke out in Kerala, she visited the territory and called for unity and severely criticised the government action. In 1924, she even visited South Africa and presided at a session of the East African Congress to criticise the Anti-Historic Bill. She supported the misrepresented Akalis and criticised the ban against them. For her impassioned contributions to the cause for freedom, she was elected as the President of the Indian National Congress Party in 1925.

In 1930, when Gandhi launched the Civil Disobedience movement with the onset of the famous Dandi March against the British-imposed tax on salt, Naidu was there right at the front, encouraging more Indians to fight against the British. When Gandhi was arrested soon after, Naidu was determined to keep the movement active and stepped in as its head, continuing to preach and exercise the Gandhian principles of a non-violent agitation.

Her involvement in the independence movement resulted in a sentence behind bars for several months, first during this movement and later during the Quit India movement. Upon her release, she swiftly went back into political agitation, this time with a prime focus on ensuring women’s safety and empowerment as a universal rule. She even accompanied Gandhi to London to take part in the round-table conferences. In September, 1931, the heads of several women’s organisations met in Bombay with Naidu as their President and drafted a memorandum demanding “the immediate acceptance of adult franchise without any sex distinction.” Once this was passed, India became one of the first countries where men and women were stated to have equal rights.

Naidu’s relentless efforts to fight for the freedom of her country and for the equality of women were soon realised, and she received much critical acclaim from the greatest fellow leaders across the world. Post-independence, Naidu became the country’s first female Governor of the United Provinces (present-day Uttar Pradesh), and when she passed away in 1949, she was still working late hours in the office.

Sarojini Naidu’s dedication to her dream of a free India, which treated its men and women as equal citizens in the eye of the law, will be remembered and celebrated for the many years to come. On a closing note, we’d like to state one of her most inspiring quotes to the nation:

“We want deeper sincerity of motive, a greater courage in speech and earnestness in action.”