Defence and aerospace next big thing in manufacturing 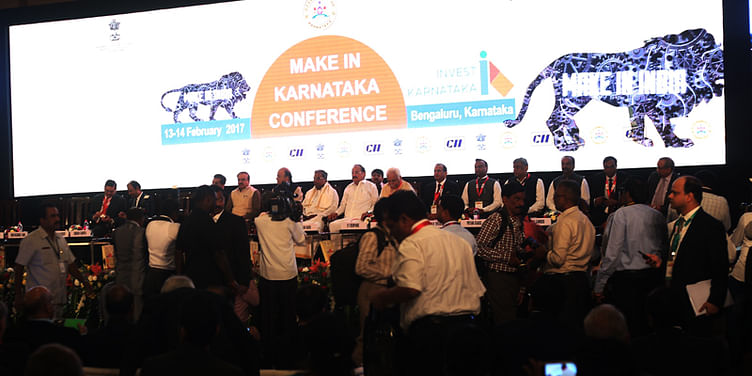 The two-day Make in India -- Karnataka conference saw 5,000 delegates attending and more than 500 B2B interactions being facilitated. Throughout the conference, the dramatic shifts to come in Indian manufacturing, and Karnataka’s readiness for it, were emphasised.

In a bid to make the most of the government's campaign to make India a manufacturing power, articulated through its Make in India initiative and offsets policy in defence and aerospace purchases, Karnataka is getting future-ready, with the aim of grabbing a slice of this juicy pie.

Bengaluru, already a defence and aerospace hub, pocketed a few projects and MoUs during the just concluded Make in India-Karnataka conference.

Finance Minister Arun Jaitley laid the foundation stone for a Machine Tools Park in Tumakuru, 65 km from Bengaluru. An MoU was signed between the Centre and the state government for setting up this Integrated Machine Tools Industrial Park at Vasanthanarasapura, Tumakuru district.

This follows the recent handover of land to HAL for setting up a dedicated helicopter manufacturing plant at Gubbi, also in the same district.

At the conference’s valedictory, Defence Minister Manohar Parrikkar laid the foundation for the Aerospace Common Finishing Facility at the aerospace park that is coming up near the international airport in Devanahalli.

Parrikkar announced that of the Rs 96,000 crore defence spend this financial year, over 90 percent of the procurement for the armed forces were indigenously sourced. “The defence ministry has for the first time agreed that the private sector can also manufacture for the services,” he said.

The Aero India 2017 at Yelahanka Air Force Station also provided an opportunity for small and medium-sized businesses to showcase their capabilities, not only to domestic companies but foreign ones as well.

Karnataka is the only state so far to have an aerospace policy as well as two exclusive aerospace parks in Belagavi and Bengaluru. The park in Bengaluru will also house infotech companies working in aerospace and defence technologies.

Bharat Forge chairman Baba Kalyani predicted that when Prime Minister Modi’s Make in India initiative gets into full swing, he country will be manufacturing four to five times the numbers that are being churned out today. He added that the defence pie would get larger in the years to come.

Many speakers and ministers agreed that it was time to replace the red tape with a red carpet.

The Make in India-Karnataka conference saw over 500 B2B meetings take place between local and international players of varied sizes across sectors such as aerospace and defence; biotech and pharmaceuticals; textiles, apparel and leather; heavy engineering and machine tools; electronics and electricals; agri and food processing; auto and auto components; manufacturing startups and plastics and chemicals.

More than 50 world-class companies showcased their manufacturing prowess at the exhibition centre.

The conference’s aim to successfully re-energise the industry and boost the manufacturing sector, while making it ready for new challenges, was successfully met, Industries Commissioner Gaurav Gupta said.

According to Finance Minister Jaitley, the next two years will see major a transformation, especially with regard to manufacturing in India. And Karnataka, he said, is ready for that change.

Industrialist and CII southern chapter vice-chairman Vikram Kirloskar said he saw Karnataka growing at 12 percent as it was already exporting in many sectors. The conference was partnered by CII and the Department of Industrial Promotion and Policy, Government of India.