From fetching cheesecake from a 5 star to paan from Shivajinagar, dunzo does it all 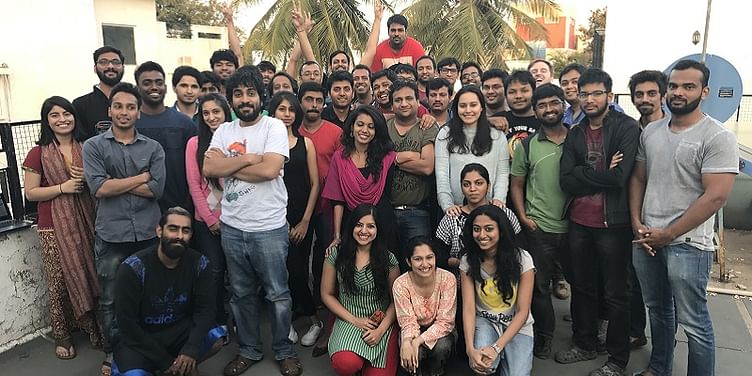 Dunzo is a daily task-management app that helps prioritise your tasks using a mix of artificial intelligence and human operators.

“How nice it would be if there was someone who could complete your list of tasks for you — just tell someone what you need finished and it is done,” thought 32-year-old Kabeer Biswas while sitting at a restaurant in Bengaluru. That was his eureka moment and the one that gave birth to the WhatsApp version of dunzo, the hyperlocal concierge app. In creating dunzo as it exists now, Kabeer was joined by Ankur Aggarwal, Dalvir Suri, and Mukund Jha. Today, dunzo is a 50-person-strong team.

Kabeer bounced his idea off a friend and started running tasks like picking laundry, pick and drop, and buying on WhatsApp for over a year. Over this period of running these tasks, Kabeer realised that everything was already available thanks to a great GPS system.

The interesting bit about the founders is that despite being completely unlike each other, they are able to work in complete synergy.

A computer science engineer who worked in a plastic factory in Silvassa before completing his MBA at Narsee Monjee and learning the ropes of sales and customer service at Airtel, Kabeer had gone on to found Hoppr in Gurgaon, which was later acquired by Hike. He came to Bengaluru after completing the transition of his earlier startup.

Mukund, on the other hand, has worked with Google and along with Ankur had started Filter, an HR tech company along the lines of HackerRank and HackerEarth. Dalvir met Kabeer through a colleague at Hoppr and was looking to do something like dunzo.

“We realised enterprise wasn’t our strong suit. So we worked on WingMan, which was similar to dunzo. We were looking to raise funding at the same time, and it was then that we were told why not merge together, as we had the tech talent and Kabeer was focused on operations and marketing. We realised joining forces would help us focus on the idea,” says 30-year-old Mukund.

So July 2015 was when dunzo’s WhatsApp version shifted to an app and the technicalities started falling in place.

“Kabeer has a customer obsession that gels perfectly well with the technical aspects of the company and that is why we are a great team,” says Mukund. The first year was about running tasks and focusing on what people want.

Where is the time?

Today, dunzo charges the customer on the kilometres run — Rs 40 for 4 km, Rs 80 for 8 km, and Rs 120 beyond that. Kabeer adds that distance for dunzo works as a measure of the cost of time. The idea, he says, is to ensure that the cost of time is paid for. The runner makes over Rs 80 per hour. Dunzo does around 1,000 tasks a day. The team started charging the customers only in April last year.

When Kabeer came up with the idea of dunzo, the value proposition was simple — we will do all your mundane work while you prioritise your tasks. Everyone has regular tasks that they just cannot avoid — picking up clothes from the laundry, dropping clothes off for alteration, picking up a delicious cheesecake and having it delivered to your girlfriend’s house — the list is endless. And there are always the time constraints.

Gautam John, a strategy consultant, calls himself a slave to dunzo. For working parents like Gautam and his wife, dunzo makes life easier by allowing the delegation of mundane tasks. Says Gautam,

"And there are several such tasks in a day. We now have the liberty to scale and prioritise what we have to do."

The idea of dunzo isn't new. Want a leaking pipe fixed? There is an app that does it for you. Want groceries delivered? There are apps that do that too. Dunzo, in comparison, is small and doesn't even have millions of dollars in funding — it raised $650,000 from Blume Ventures and Aspada Investments in late 2015. The team then raised a follow-on round of $1.5 million from Blume and Aspada late last year.

"When Kabeer came to us, he wanted $400,000. Since both Aspada and Blume wanted to invest, we offered him more money. It is one of the few times that we have cut a cheque of such a small size."

Platforms like UrbanClap, Housejoy, BigBasket, and Grofers already cover various aspects of what dunzo does, and dunzo's manner of performing tasks is also not novel. M, Facebook’s virtual assistant for Messenger, uses both manual and AI intervention to help users with tasks. Y Combinator-backed Magic and UK-based Dispatch.pm are other interesting players in the on-demand task management space. There also is the Mumbai-based Scootsy, a delivery platform that focuses on delivery of everything that a customer could need.

Bringing in the ‘dunzo’ factor

So why is dunzo different? Sahil believes it is the team’s vision and focus on customer service and experience.

With over 2,50,000 transactions till date, one of the biggest benefits of dunzo for the investors is that they never have to talk to the founder directly. Sahil says everything they do is completely transparent — there is a dashboard that shows open and completed tasks at the click of a button.

The operations team works on completing each consumer’s task. Every task is checked and monitored and issues are resolved immediately. Kabeer says dealing with supply chain issues of a factory and looking after sales at Airtel taught him the ropes that have proved handy in his entrepreneurial journey.

“Selling thin air in telecom teaches you something. It shows you first-hand how customers are evolving. The Airtel business model is a case study in point, before starting up. They converted the business into minutes, and rolling out towers became somebody else’s job. When I joined Airtel, I was employee number 30,000 and yet there was an entrepreneurial DNA. If you had the idea, there was nothing in the company that could stop you from executing it. All you had to do was go ahead and complete it.”

However, Kabeer adds that all telecom operators, in the beginning, believed that they could build a Facebook, but weren’t product-driven. They would create networks, but they were only open to Airtel users. “I would sit and try explaining to a finance and supply chain guy at Airtel the concept of sharing images on a social media network. I would explain that if you have shared a picture, your friend can even use another network. And they wouldn’t agree,” says Kabeer.

Figuring that it wasn’t a great place to build products, Kabeer left Airtel and after a break started Hoppr with Mohammed Imthiaz, his boss at Airtel. Completely SMS-based, Hoppr was a device-agnostic location-based service that targeted the then 900-million-strong Indian mobile subscriber base. Kabeer says,

“Hoppr was built with our telecom backing. There were none like telecom operators when it came to location and distribution, but what I learnt at Hoppr was that you can’t bundle freebies, distribution, and access to beat a better product. A better product always wins no matter what. Freebies create small-term advantages, but they do not create your moat. Your moat has to be the product and the customer experience it gives.”

Are you ready for change?

Hoppr had raised over $10 million, but within 18 months of it, everybody had Android phones. This gave Kabeer and the organisation an invaluable lesson — be prepared for platform shifts. For dunzo to be around for another five years, the team has to be ready for these shifts and even accept the fact that drones will someday be in use, he says.

Dunzo today completes a task in 40 minutes, which the team aims to reduce to 30, leading to increased automation. This, however, is just physics — there will be friction of travel. Kabeer says one needs to be prepared for this. He believes,

“I think first-time entrepreneurs, if they have too much money, don’t know what it means. You can’t process what $10 million in the bank means. Everything seems logical. Every plan seems great. Over a period of time, the cost of the plan might be Rs 10 lakh which doesn’t seem much, but you don’t see the impact.”

Kabeer adds that if there were no dunzo, people would pick up that cake themselves — the app just makes them realise that delegation can make their lives easier. Speaking of expansion plans, Kabeer says,

“We want to get Bengaluru right first. We don’t know how to launch in another city yet. In Bengaluru, I went around and tested if this would make sense. But we can’t do that in other cities. We are still finding efficiencies, tweaking the product, and finding a solution that solves the problem in the best possible way. We will expand after that.”