From starting up in a garage in Bengaluru to clocking Rs 2,000cr in sales- the Dynamatic Technologies story 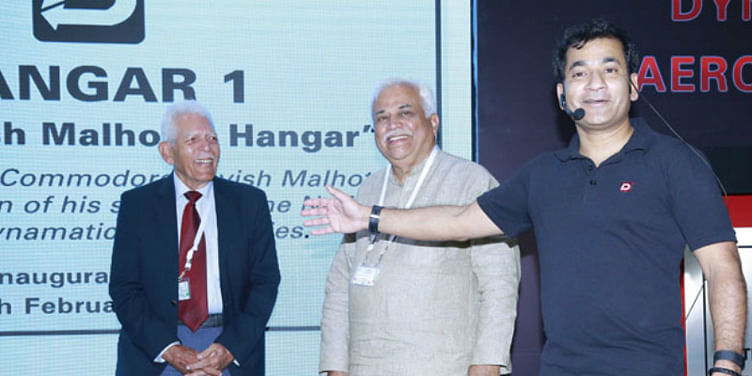 Udayant Malhoutra, CEO and MD, Dynamatic Technologies recently took the stage at the Make In Karnataka conference held in Bengaluru, to share the journey of his venture, which has its origins in the city. He noted that his 31-year ‘startup’ journey was filled with multiple challenges early on. He said,

Today, Bengaluru is known as the startup capital of India, but I started my company 31 years ago and it been a ‘startup karmabhoomi’ for me.

Starting up with an alternative funding mechanism- post-dated cheques

Udayant recalled that he 31 years ago, Dynamatic Technologies was a tiny engineering company that manufactured hydraulic pumps for tractors. As a young 20-year-old it was an overwhelming challenge, as money was scarce then and engineering talent and capabilities in India were also limited. He said,

To bootstrap outside the banking system that never gave us money, I had to travel with the people we had, into the villages of India to try and sell pumps to tractor part dealers and create an alternative funding mechanism.

There was no venture funding in the country back then but the entrepreneurial India Udayant saw was in the thousands of traders and mechanics. He said,

As we travelled across different towns and villages and met people we came back with post-dated cheques, which became the funding mechanism for our business.

Dynamatic Technologies slowly grew to Rs 5-6 crore in sales and went on to invest more in machinery and equipment. Being the pre-computer era, Udayant and his team would formulate a spreadsheet on the wall of their workshop. He said, “We tabulated our bill of materials and estimated how our resources would be managed for the week.”

At this stage, Dynamatic Technologies was making only hydraulic pumps and had just about turned profitable. Udayant woke up one day to the news that Soviet Union had collapsed and India was unable to get hydraulic pumps and components for its battle tanks.

After two years of work, Dynamatic Technologies was able to partner with Defence Research and Development Organisation and provide hydraulic pumps for their tanks like the R72.

Udayant noted that as young entrepreneurs it was an exciting journey and his team also got the privilege to work with industry stalwarts like APJ Abdul Kalam and Raja Ramanna, the renowned Indian physicist who was part of India’s nuclear programme.

Dynamatic Technologies then went on to design and develop a jacket for the uranium system of a battle tank hydraulics mechanism for DRDO. Udayant recalled, “This put us on the map as an R&D house and suddenly we weren’t just a small manufacturing company anymore. We became an important technology partner for DRDO and various arms of the government.”

Moving from strength to strength

In 1994, Udayant got to meet Ravish Malhotra, a retired Air Commodore of the Indian Air Force and cosmonaut, who went on to become Chief Mentor for Dynamatic Technologies Aerospace division. With his guidance, Dynamatic Technologies started making aero structures for DRDO's drone system Lakshya. Udayant added.

In a garage outside our hydraulic pump plant we started making aero structures for DRDO’s Lakshya. That got us many awards. HAL invited us as a developmental partner for their projects.

When Sukhoi Su-30MKI was up for bids for private sector tendering, Dynamatic Technologies was able to win 90 percent of it. Udayant noted, “About one-sixth of the Sukhoi was built by us. Nobody imagined in 1990 that we would be where we are today.”

Around a decade ago, Airbus started viewing India as a potential manufacturing hub and looked at benchmarking for India. After the preliminary benchmarking, Dynamatic Technologies was chosen to work on their flap track assemblies. Udayant noted that they did all the engineering work, rebase-lined the configurations and in June 2010, achieved the status of being the single-source supplier for Airbus’s A320 Flap Track Beams.

More recently, in 2016, Dynamatic Technologies acquired a competitor in UK to become the world’s largest manufacturer of hydraulic pumps.

Business is not just about technology

Addressing the young entrepreneurs gathered in the packed hall at the conference, Udayant noted that from a startup point of view, it is important for one to understand that

Elaborating more about value creation and making use of resources at one’s disposal Malhoutra noted that Dynamatic Technologies created a strong value proposition by taking advantage of of the complementarity of UK and India. He said, “UK had great robotic equipment and reliable suppliers, while India has skilled craftsmen and great engineering talent.”

Udayant said that they were able to leverage the power of digitisation and Bengaluru to become a part of the global supply chain. He added,

From small company focussing on hydraulic equipment, we have now expanded to multiple categories like automotive, hydraulics and defence products. We have a great marketplace with engineers across the world. We have multiple subsidiaries worldwide and just over Rs 2,000 crore in sales. We are an Indian company, but a global brand. This wouldn’t have happened if I didn’t startup in Bengaluru.

Diving deeper, defence noted that it is a cultural phenomenon. He noted that Delhi’s strength lies in power generation, Mumbai is more mercantile while Bengaluru had this unique culture of 'we can do anything'. He said,

As a young 20 something that was all I needed to be told for encouragement. To all the 25-year-olds I would like to say you too can do anything.