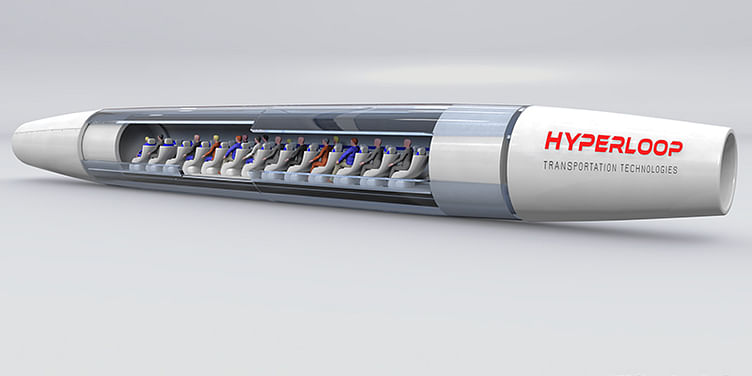 As flying metal birds performing acrobatics in the sky wowed spectators at Aero India 2017, which opened today at the Yelahanka Air Force Station in Bengaluru, audiences in another part of the city were enthralled as they listened spellbound to Bibop G. Gresta talk about his Hyperloop concept at the Make in India-Karnataka conference.

Gresta, while explaining the work his Hyperloop Transportation Technologies Inc., the company inspired by Elon Musk, was doing, created quite a buzz among the audiences when he told them with the Hyperloop technology, people from Bengaluru would be able to get to Mysuru, a distance of 140 km, in 20 minutes flat.

Gresta is the founder and chairman of HTT, a company centred on and taking forward the Hyperloop concept that Musk inspired. He was speaking at a panel discussion on automobile and auto components at the conference.

Hyperloop is a technology where people are transported at 760 miles per hour (1,216 km per hour), or almost the speed of sound, in a pod that travels through a vacuum tube. This technology costs one-fourth that of a high-speed rail link and a fraction of the cost of a magnetic levitation transport system or maglev, which is a showpiece German technology now available in China too.

“With every hour of work, the company is closer to building the technology,” Gresta announced.

Surprisingly, given the sheer scope of the idea HTT is working on, the company works without a distinct structure. It crowdsources work, and the contributors get to own one stock of the company for every hour of work put in. Said Gresta,

:There are 800 scientists working on the project from across 42 countries, and when each of them puts in 10 hours of work a week, they are given ten stocks in the company – that is a stock for per hour’s work. It’s the biggest crowdsourced project in the world."

Gresta said that he was trying to entice governments across the globe to build the Hyperloop, and hinted that in a couple of weeks, there could be an important announcement concerning India.

He has been canvassing with the Karnataka government and will next go to Jharkhand, where the Momentum of Jharkhand, an investors’ meet, is being held on February 16-17.

Hyperloop is being touted as the next big advancement in transportation, where people can be transported in pods at the speed of sound – the speed matches that of a passenger plane, but the pod will move safely inside a vacuum tube built on the ground.

Gresta also said that the Hyperloop technology produces 30 percent more energy than it consumes, which means that it produces a usable surplus that can be transferred to other users.

But why do we need Hyperloop? “You guys think there is a traffic jam in Bengaluru? This is nothing compared to Indonesia and China, where there are ninja traffic jams,” he said, coining his own word for it. “Plus, there is also pollution due to the high number of private vehicles, making it difficult to breathe in large cities such as Beijing.”

With every hour we spend in a traffic jam, we live that much less, he said rather dramatically, pushing for his yet-to-be-demonstrated technology.

He informed that Hyperloop was not new. According to him, in the early 1900s, a tunnel had been built under the New York subway, but the engineers were stopped from going ahead with the experiment as, back then, nothing was allowed to move faster than 100 miles an hour, that too only over ground or on rails. Then came the very expensive magnetic levitation technology, whose cost still hasn’t come down.

When Musk first wrote about this technology years ago, it captured the spotlight immediately, inspiring him and his co-founder Dirk Alhborn to work on it.

Karnataka's Industries Commissioner Gaurav Gupta said that such ideas were of great interest to Bengaluru, as this is where the brightest minds and industry come together.