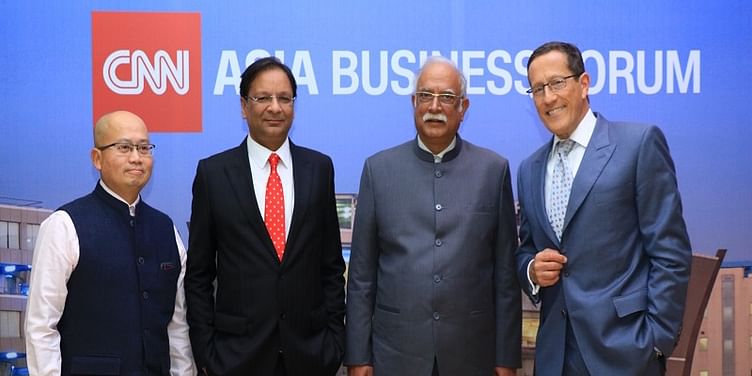 On the sidelines of the Make in Karnataka conference in Bengaluru on Monday, the city’s tony Taj West End hotel played host to the second annual Asia Business Forum, hosted by CNN. The evening, which struck the right balance between wit and wisdom, brought together government officials, aviation honchos, entrepreneurs, and investors to share their views on the future of aviation and technology.

The key takeaway from the evening was that in a year of global political and economic uncertainty, the outlook for India remains positive.

In a freewheeling conversation with CNN’s Richard Quest, host of Quest Means Business, Union Minister for Civil Aviation Ashok Gajapathi Raju confirmed that despite problems around heavy taxation and operational costs, the aviation industry continues to have a multiplier effect on the economy. The focus, he says is on regional connectivity, which he believes will unlock tremendous economic potential.

Weighing in on the government’s business model, Mr Gajapathi Raju told the gathering that the right mix of estate[DG1]  and public- private partnership will be key to the success of this sector.

When Quest touched on the subject of national carrier Air India, the minister said that while the airline hadn’t added to its losses in the past two years, and how he would love to see it survive, the tax payer’s money would not be tied into its fortunes indefinitely.

Responding to Quest’s question about Air India going private, Mr Gajapathy Raju noted, “If it is left the way it is, it is bound to die. We want Air India to survive; it doesn’t matter where it is as long as it serves the Indian people and our Indian skies.”

When asked about Vistara’s foray into the highly competitive industry, Yeoh said

“India is a land of opportunity and that’s what attracted us to India.”

Tekriwal pointed out that despite being a cut-throat industry, there was no better time to be in the aviation business. Her statement rings true as India continues to be the fastest-growing country in the world in terms of passengers.

Yeoh pointed out that the Indian civil aviation market has grown in excess of 20% over the past 25 months. He emphasised that despite this exponential growth, Vistara is in no rush and is taking a measured approach towards its expansion in India.

SpiceJet, which was at one point in big trouble, is now comfortably back in the competition with Singh at the helm. Singh echoed Yeoh’s sentiments. He shared that SpiceJet would only invest in planes if they could justify return on investment. Looking at the future, he believes there is potential for growth in low-cost long-haul flights, but it needs to make economic sense before such an idea can take flight.

Singh pointed out that compared with the rest of the world, India has the highest cost of ATF[DG2] , cost of airports, and the lowest fares; all this makes the competition cut-throat.

Yeoh added that the cost of doing business in India is high, but a lot of effort is being made by the government to lower these costs.

As the Trump administration considers significant changes to its visa programme, Infosys co-founder Nandan Nilekani sees only positives as changes in American politics cast a shadow on the Indian IT industry. He believes a vast pool of talented engineers will shift their focus from Trump’s “America First” to “India First.” He emphasised that America’s greatness stemmed from its ability and willingness to accept talented immigrants.

Amitabh Kant, the CEO of the NITI Ayog said “I think Donald Trump will soon realise that a vast number of Indians have contributed very significantly to the growth of software in America.” Kant noted that countries like Japan, Korea, China, and America have prospered on the premise of open trade. He added “You can’t have a policy saying that when I grow, I believe in open trade, and when the rest of the world wants to grow, we want to have closed trade…”

As the conversation steered towards Digital India, CNN’s Kristie Lu Stout quizzed Kant on how they managed to entice Apple to invest in India. Kant responded that in the last year-and-a-half, over 40 mobile manufactures had already set up in India and Apple was merely the latest entrant.

Nilekani, who is also the architect of UIDAI, believed that demonetisation has had an impact on the acceleration of digital financial services. Kant added that the government’s BHIM initiative was one such example, which they claim had made transactions of Rs. 361 crore so far.