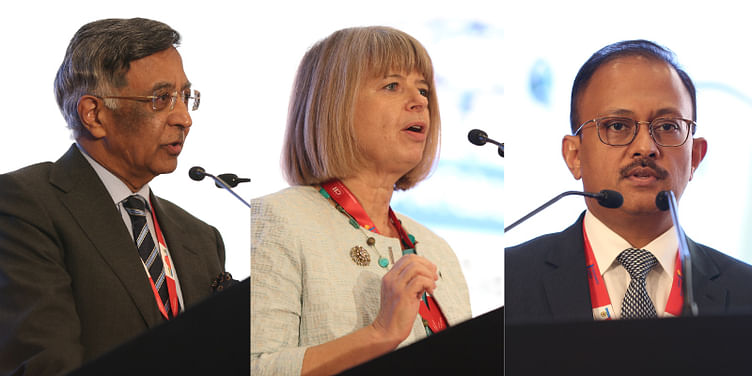 At a session on Aerospace and Defence at the Make in India -- Karnataka conference on Monday, various speakers from large MNCs and defence PSUs echoed the view that brand Bengaluru was firmly entrenched as the aerospace and defence capital of the country and was gearing up to play a larger role in the world.

Speakers were of the view that, with the large number of defence SMEs and MSMEs in the city and the abundance of human capital, it was easy for companies to set up shop in Bengaluru and find the right talent.

The speakers’ views mirrored the Karnataka government’s intention of betting big on defence and aerospace, especially with Aero India 2017 starting on February 14 at the Yelahanka Air Force Station, where the chatter is veering towards offsets and Make in India.

Hindustan Aeronautics Limited chairman Suvarna Raju said that Karnataka has the potential for greater industrial participation owing to a large number of engineering colleges that churn out thousands of graduates. Though a majority of these graduates are not readily employable, they can be moulded into a good workforce to fit the needs of foreign companies as well as Indian companies that produce for them.

“Karnataka is the first state to come out with an aerospace policy as well as have two exclusive aerospace parks. All this will help Karnataka become an aerospace hub by 2023 and an MRO hub a few years down the line,” Raju said.

He announced that HAL had already trained four lakh hands under a National Skill Development Corporation programme for aerospace precision engineering, and that these trained people could be employed in the industry to make precision components and other products.

Raju said that HAL also had 5,200 MSMEs or ancillary units attached to it, and that the defence PSU would soon turn into an integrator and outsource most of its production. The defence offsets is a good policy and huge investments are expected in this sector, he added.

Baba Kalyani, chairman of Bharat Forge, said that the Make in India programme initiated by Prime Minister Narendra Modi two and a half years ago is bearing fruit now. “It means that we will be manufacturing four to five times the quantity we are making now,” he said, giving the audience a sense of how big this sector is going to be.

On a cautionary note, Kalyani said the industry needs to see orders flowing in. Of course, that means one has to plan in all respects right now, he added.

Lauding the UK for its excellent university-industry programme, he called for replicating such programmes in the country.

UK’s Minister for Defence Procurement Harriett Baldwin, who is in the city to attend the Make in India-Karnataka conference, said that India and the UK make for ideal partners in defence and aerospace. The UK, despite leaving the EU, wants to reach out to other places. That is one of the reasons why UK Prime Minister Therasa May chose to make India her first stop after Europe. “Fewer barriers and more trade between our two countries will make us prosper and secure,” she said.

She emphasised that Bengaluru had a special relationship with the UK as several British companies had been partnering with HAL for decades.

The panel, moderated by Sandeep Maini who headed the aerospace policy, was chaired by the state’s industries commissioner and had panellists representing large MNCs that are based in Bengaluru or have their R&D facilities here.